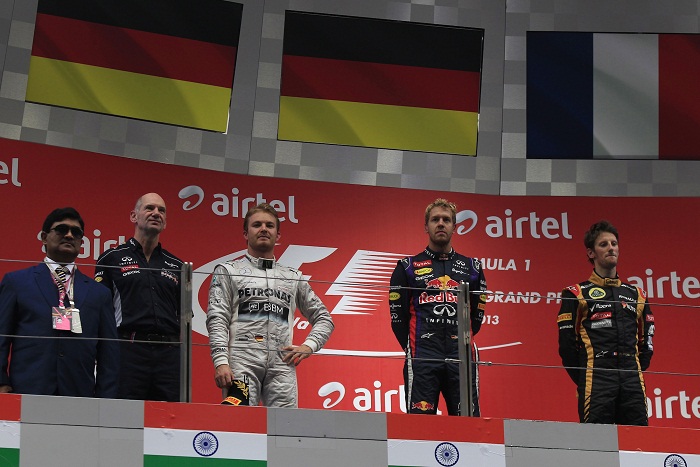 AWESOME FOURSOME! ! INFINITI RED BULL RACING MAKES HISTORY BY CLAIMING THE QUADRUPLE DOUBLE-
Infiniti Red Bull Racing wins the 2013 Formula One Constructors’ Championship-
Sebastian Vettel wins the 2013 Formula One Drivers’ Championship-
SEBASTIAN VETTEL: “First of all I would love to say thank you to the crowds, it was an unbelievable reception today and it’s a shame we are not racing here next year. I’m speechless. I crossed the line and I was empty. I took ages to think about something to say. It’s one of these moments where you want to say so many things but you can’t. It’s been such a phenomenal season. I think the team and the spirit inside the team is so strong; I said it on the radio already – it gives me so much power. It’s a pleasure to jump in the car and go out for the guys and girls and try to give it all I have. The car was fantastic today. I didn’t think about the do-nuts before the race today – it just happened. My engineer directed for the usual procedure, but I said ‘not this time!’. There are so many people on the main grandstand here, I just had to do it. I want to say a big thank you to the team to all the people behind us. It was for sure not an easy season and even though people on the outside thought we had it in our hands, I think it was difficult. It a was tough season for me personally, to receive boos even though we haven’t done anything wrong; to overcome that and give the right answer on the track and get acceptance makes me very proud. To join people like Prost, Fangio and Michael is unbelievable. I think this is one of the best days in my life so far. There are so many people that I have to thank; I’ve always tried to listen and learn and it’s incredible to race some of the best drivers in the world.”

Alain Prost commented, ‘I’m delighted to see Sebastian win the title today. He is a great driver and he has had some outstanding wins this year, some of the best of his career so far. Singapore was one of those wins: he was fighting all the way but he made it look easy, which is always a mark of a worthy winner.

‘You can see he is methodical in his approach, builds a strong team around him that is 100% motivated for success and is entirely focused on the end result.

‘He is a great champion and I don’t think this title will be his last. He has a good team around him, stability with the technical team and with Renault, and of course he is still young enough to challenge for more

‘I’m pleased to see him equal my four titles. I wish him all the best to go on and win others and become a great Renault champion.’

Jean-Michel Jalinier, President of Renault Sport F1, added, ‘Congratulations to Sebastian on his fourth title. He has shown great panache this year against very tough competition and fully deserved to win this season. It is a proud moment for Renault too, as Sebastian has taken the number of drivers’ titles we have to which we have contributed to 11, five of which have been won with the Renault V8 engine. We are very incredibly proud to have been able to maintain our quality and success throughout this entire period and to give great drivers like Sebastian the opportunity to do justice to their innate talent.’