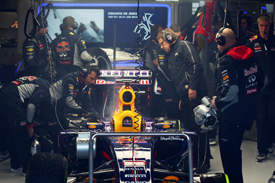 Infiniti Red Bull Racing called an early halt to its second day of testing in Jerez after power unit partner Renault Sport F1 reported an energy store issue on the RB10. Focusing on tomorrow’s running, the team opted to suspend today’s outing in order to fully investigate the problem.
“Obviously we’ve not had a lot of running and have a few problems to sort out, but with such big rule changes it is usual to have some teething problems. That’s what tests are for, to sort those issues out. The next two days will be important to get some track time to prepare for the tests in Bahrain,” said Sebastian, who now hands the RB10 over to Daniel Ricciardo for the remaining days in Jerez.
Race Engineering Co-ordinator Andy Damerum added: “It’s obviously not ideal, but it’s better to take the time to get to the root of the issue, so the decision to stop early today is probably a good one. We did get some track time this morning, however. As I said yesterday, even though it looks brief, the amount of useful data we’re getting back is impressive. We cured the issue we had yesterday and ran that reliably this morning and it will be the same process this evening. It’s a massive learning curve for everyone and it’s simply a case of working through it step by step.”
DAYTONA 24 HOURS