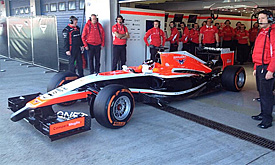 RED BULL: Despite intense work overnight to correct the issues that caused the team to halt it’s programme early yesterday, Infiniti Red Bull Racing had to again cease track activities this afternoon. Daniel Ricciardo completed a handful of laps in the RB10 before issues similar to yesterday’s forced him to stop. The team will now spend the remainder of today investigating the causes in order to ready the RB10 for tomorrow.

Race Engineering Co-ordinator Andy Damerum: “We worked hard yesterday to make the changes it was felt were necessary to overcome the problems we identified and we were hopeful of a more successful day today. Unfortunately, the measures we took only partially solved the issue and, as with yesterday, it’s more sensible to stop and dig deeper into finding a solution. It’s obviously not where we want to be and naturally the whole team is frustrated by these issues. However, we’re pretty good at bouncing back from this type of thing. This is where the whole team pulls together and I’m sure we will get these problems fixed.”
FORCE INDIA:
Nico Hulkenberg: “It’s difficult to give a lot of feedback after my first day in the car because most of my time was spent doing mapping and data collection with some constant speed runs. So I’ve yet to really get a feel for the car. My first impressions are that the new era of Formula One feels very different to the car I drove in Brazil last year. It’s a very different sensation, but you have to remember this is very early days and there is a lot more to come. Things will evolve quickly over the next few weeks because the car is very much a work in progress and we still have lots to learn.”
Andrew Green, Technical Director
“We’ve definitely had more downtime that we would have liked today, but ironing out reliability issues is the priority during this first week of testing. We are still working through operational checks with the car and it’s a slow process with both physical inspection and data analysis every time the car runs. Each issue that we resolve represents progress and in that regard we’ve taken several more important steps on the road to getting the VJM07 ready for the first race of the season.”
WILLIAMS F1 TEAM:

Rod Nelson, Chief Test & Support Engineer: Today Felipe was in the car and he’s done quite a bit of work in the simulator at the factory, so it was good to get his comments on the real thing as opposed to the digital version. We got some really good feedback and have a clear direction to go in from both our drivers this week despite the slightly limited mileage. We are working through our system tests here in Jerez and are coming across a few issues which we are resolving. Overall, we are relatively happy with the progress we are making.

Felipe Massa: It was a new experience for me today. The first day with a new car is always very exciting but adding to that changing teams, all the new faces and the new place, it made it even more exciting for me. Unfortunately we didn’t do the amount of laps we wanted to do today but it’s pretty acceptable for the first days of testing considering all the rule changes with the car. The car feels very different to what we used to have in many areas. You need to understand how to drive with the engine, the chassis, the tyres and the turbo, but it’s fun! There will be a lot of improvements we can make up before the first race and throughout the championship. Performance is important but I think reliability will be a key issue to think about for the first race. I’m happy with how I have been welcomed into the team as everyone has been very kind and professional. I’m really happy and I know we have a lot of work to do to fix the little issues we have, but I think we can have a good championship together. It’s also my first experience with a different engine manufacturer and it’s been really great working with Mercedes. I’m really happy with the new power unit and the way the team work so it’s going to be interesting. Overall, I’m very happy with my first day.