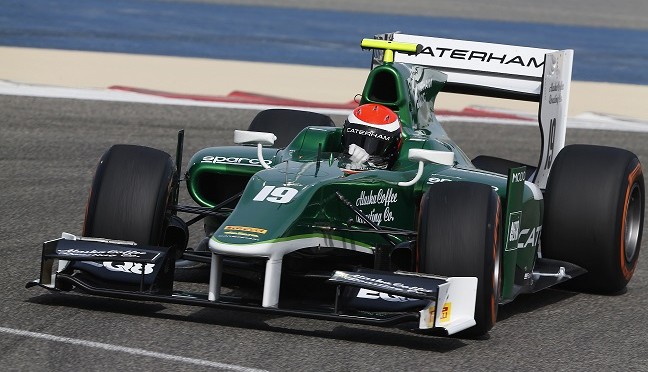 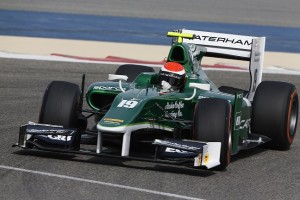 ALEXANDER ROSSI LEADS THE WAY IN SAKHIR.
American driver quickest in Day 1 at Bahrain International Circuit
The final GP2 Series pre-season test session opened today at Bahrain International Circuit on a dirty track. There was one change in the drivers’ entry list compared to last week as Vittorio Ghirelli joined Trident in car 22. Pirelli provided every driver with five sets of Hard compounds and two sets of Soft compounds for the three days of testing.
Stoffel Vandoorne was the first driver to feed onto the track as soon as the lights turned green, but it was Jolyon Palmer who set the early pace. The first half of the session was pretty quiet as drivers waited for the track to get cleaner. Kimiya Sato was the first man to set a laptime inside the 1m42s with Daniel De Jong first and then Julian Leal bettering the Japanese’s time to snatch the top spot. Facu Regalia broke the 1m42s barrier along with Mitch Evans, but the Kiwi remained two tenths slower than the Argentine driver. Rio Haryanto found some extra pace to set a laptime of 1:41.400, but Felipe Nasr went even quicker and with one hour left on the clock, the Brazilian sat pretty at the top of the standings. Regalia was on a mission and improved on Nasr’s laptime by five hundredths. Twenty minutes before the end of the session, a red flag briefly halted the proceedings as Takuya Izawa stopped on track. The action resumed but a second red flag happened soon after when Simon Trummer hit the kerb at Turn 10 and stopped on track. In the dying minutes, Arthur Pic moved up to P1, but at the chequered flag it was Daniel Abt who dipped under 1m41s and finished the session at the top, five tenths ahead of Pic. Abt’s teammate Regalia, Nasr, Haryanto, Alexander Rossi, Stéphane Richelmi, Evans, Johnny Cecotto and Jon Lancaster completed the top ten.
The afternoon session saw Palmer taking to the track first, but it was Vandoorne who set the early pace in a 1:41.916. As the clock ticked down, the top spot was claimed successively by Richelmi, Raffaele Marciello and Nasr. Evans became the first man to go under 1m41s and stayed on top of the standings until there were thirty minutes left in the session. Conor Daly went quickest in a 1:40.734, but countryman Rossi was able to go one tenth faster to snatch P1. Abt moved up to P2 just before the session was shortly red flagged. The session was restarted with only ten minutes left on the clock. Evans moved up to P3 on his final attempt and at the chequered flag, Rossi remained the quickest man of the day ahead of Abt and Evans. Behind the trio, Daly, Palmer, Cecotto, Marciello, Ghirelli, Nasr and Vandoorne completed the top ten.
Tomorrow’s session will start at 9am local time.
Morning results
Afternoon results