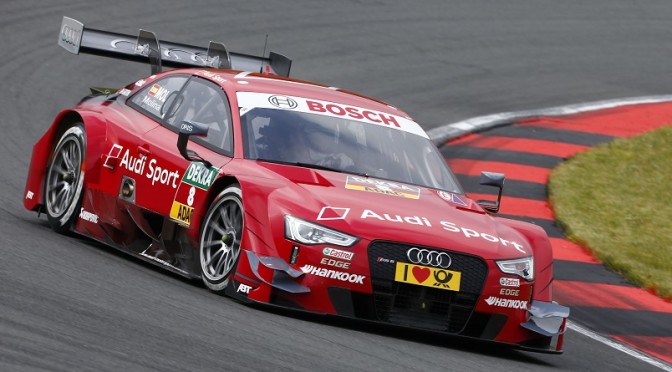 Oschersleben. Miguel Molina has secured first place on the grid for the second round of the DTM season in the etropolis Motorsport Arena Oschersleben. With his Audi RS 5 DTM, the Spaniard completed his fastest lap of the 3.696 kilometres long circuit in the Magdeburg area in 1:20.007 minutes. “I am so happy. This is my third pole in the DTM and it always is a great feeling. I had a perfect car, it was just like I wanted it. I like this track; it is quite technical, one has to be a real racing driver,” the 25-year-old said. Molina’s advantage over second-placed Marco Wittmann (BMW) was more than half a second. Behind the winner of the Hockenheim season opener, Adrien Tambay (Audi) will be starting from third place.

Wittmann, who will be starting the race next to Molina from the front row of the grid with his BMW M4 DTM, was satisfied with his qualifying result. “I am very happy with second place, because it was a little bit difficult today. I had a bit of a struggle with the car. However, we are very confident and optimistic for tomorrow with second place on the grid. We will certainly attack,” the German announced.

Pascal Wehrlein was the fastest driver with a DTM Mercedes AMG C-Coupé in qualifying. The 19-year old only just failed to make it into the final qualifying heat and will be starting the second DTM round of the year from tenth place on the grid. “Things were going slightly better than at Hockenheim, but everyone knows that we are still lacking the pace. We have to analyse all the data and we have a long way ahead of us. After all, we can’t change our entire car within a fortnight. When it rains, we might have better chances,” the Mercedes-Benz driver said referring to the weather forecast for Sunday.

Once again, rookie driver António Félix da Costa (BMW) showed a strong performance by qualifying fourth ahead of Timo Scheider and defending champion Mike Rockenfeller (both Audi). For Paul Di Resta, however, qualifying was disappointing. For the second time already, the 2010 DTM champion, who is racing in the DTM again after three years in Formula 1, retired after the first of three qualifying heats. In Sunday’s race, the Brit will start from 21st place.

According to the new sporting regulations, performance weights will be in use for the first time at Oschersleben. Based on the result of the season opener at Hockenheim, BMW drivers Marco Wittmann, Timo Glock, Bruno Spengler, Martin Tomczyk, Augusto Farfus and Joey Hand each had to add five kilograms. Their fellow BMW drivers Maxime Martin and António Félix da Costa each got 2.5 kilograms of additional weight. On the other hand, all seven Mercedes-Benz drivers were allowed to drive a car that is five kilograms lighter.

A rundown of the tyre choice of all the drivers for the start of the race will be available during the evening at www.dtm.com. The drivers can choose from the standard tyre or the option tyre from series partner Hankook; the latter can only be used in the race. The second race of the season will be run over 51 laps and 188.496 kilometres and starts on Sunday at 13:30hrs (12.30hrs BST). ARD is broadcasting live from Oschersleben from 13:15hrs (12.15hrs BST).