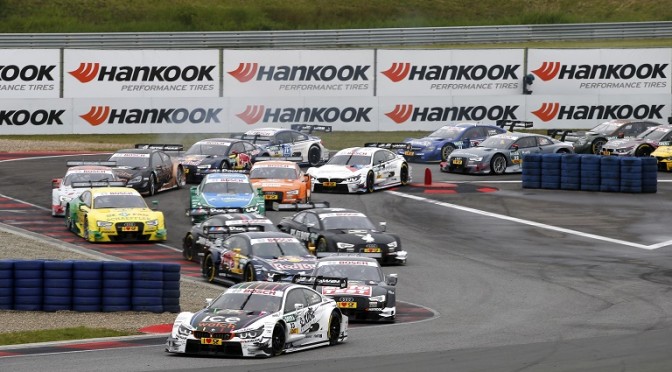 Oschersleben. Rain, tyre gambles and risky overtaking manoeuvres – the second DTM round of the year in the etropolis Motorsport Arena Oschersleben had plenty of action. After a strategic and driving masterpiece, Christian Vietoris emerged as the surprising winner with his DTM Mercedes AMG C-Coupé. With a margin of 0.6 seconds from defending champion Mike Rockenfeller (Audi) after 44 laps, the 25-year-old Mercedes-Benz driver crossed the finish line as the winner of the race for the first time in his DTM career. “As we currently aren’t among the front runners in normal conditions, I obviously hoped for rain. Perfect that it turned out that way. We wanted to use these chances and so we did. We had an ideal strategy. I am overjoyed. What a race,” said Vietoris, who already changed to rain tyres after the formation lap, then chased the field from the pit lane and eventually made it through as the only driver with just one pit stop.

With his second place, Rockenfeller took over the lead in the drivers’ standings. Driving another Audi RS 5 DTM, Edoardo Mortara finished third in the action-packed race. Behind Paul Di Resta (Mercedes-Benz), last year’s winner Augusto Farfus came fifth as the best-placed driver of a BMW M4 DTM. In total, 65,000 fans attended the race weekend in the Magdeburg region.

Rockenfeller, who kept Vietoris under pressure until the final lap, was very happy with his score. “In the DTM, it is like in everyday life. You should never give up. Today, I almost did. The tyre choice at the start of the race wasn’t optimal. Then, there was some contact with other drivers and many safety car interventions. I really didn’t know where we were anymore and I wanted to give up. Then, all of a sudden, my team told me on the radio that we were in contention for a top position. Unbelievable,” the reigning DTM champion said. Mortara was also happy. “Being on the podium again is a great feeling. Too bad, we could even have ended higher up, but I had problems with the handling of the car after the second stop. Nevertheless, we had a great strategy,” the Audi driver said.

At times, Farfus also lost track of the situation in the Motorsport Arena. “This was the craziest DTM race I have ever driven. When the rain set in, it was really difficult and partly chaotic. Then I also got a penalty after contact with another car. However, scoring points and being among the front runners is a good thing,” ‘Gustl’ commented.

After a great recovery, Miguel Molina finished in sixth place. After setting the fastest time in qualifying, the Audi driver had been relegated to the back of the starting grid because his car wasn’t in accordance with the regulations. His fellow Audi driver Timo Scheider, who already scored two victories at Oschersleben, was classified seventh. Gary Paffett (Mercedes-Benz), Martin Tomczyk (BMW) and Adrien Tambay (Audi) rounded out the top ten.

The changeable conditions at Oschersleben prepared the stage for one of the most exciting DTM races in history. In total, the safety car was deployed three times after accidents and mixed up the field every time. Marco Wittmann had bad luck. The BMW driver, who won the season opener at Hockenheim, started from pole position, but slid off the track later in the race and retired.

Allocation of the performance weights will be changed prior to the third DTM round at the Hungaroring in Budapest (May 30 till June 1). After the result at Oschersleben, Mercedes-Benz drivers Christian Vietoris, Paul Di Resta and Gary Paffett have to add five kilograms of weight each, their fellow Mercedes-Benz drivers Vitaly Petrov, Pascal Wehrlein, Daniel Juncadella and Robert Wickens 2.5 kilograms each. The cars of the BMW drivers, on the other hand, will become lighter: for Augusto Farfus and Martin Tomczyk 2.5 kilograms, for António Félix da Costa, Bruno Spengler, Maxime Martin, Joey Hand, Marco Wittmann and Timo Glock five kilograms each. Like after the first race, the weight of the cars for the eight Audi drivers will remain unchanged.

Wolfgang Schattling, head of DTM management, Mercedes-Benz: “The key to our success was a super strategy that our engineers worked out during a difficult stage in the race. After two safety car phases, we realised that it could turn out in a good way. My heartbeat really rose. However, we know that we still have a lack of performance and that we still need time to make up for this. This time, the weather played out well for us.”

Dieter Gass, head of DTM, Audi: “A crazy race with an unexpected result. When you have the fastest car in the field, when you have three cars on the first three places at times and when you already have an advantage of more than ten seconds, finishing in second and third place is somewhat disappointing. However, today’s race was a lottery in which those had an advantage who were able to take the biggest risks. Having two drivers on the podium again and having taken over the lead in the drivers’, manufacturers’ and teams’ standings is great. The race also had two unsung heroes: Jamie Green, who was in a class of his own in the rain today but remained unrewarded, and Miguel Molina, who drove the fastest race lap. Had it not been for him being dropped to the back of the grid, he surely could have finished better than sixth.”

BMW Motorsport Direktor Jens Marquardt: “Wolfgang Schattling’s rain dance seems to have paid off. Congratulations for that. Unfortunately, we only have two drivers in the top ten. That is not the result we had expected here. However, the weather certainly was the decisive factor in this case. 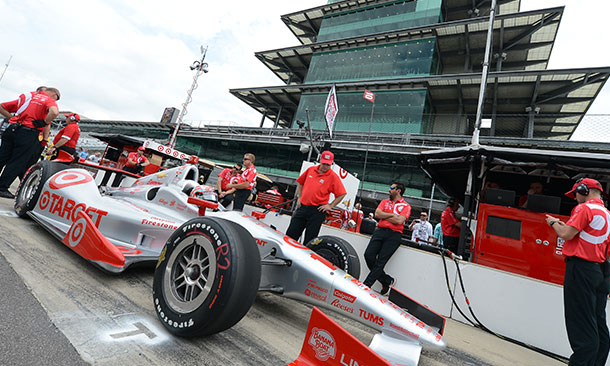 INDIANAPOLIS — Ed Carpenter turned the fastest four-lap average speed in Round 1 of qualifications for the Indianapolis 500 Mile Race, but he’ll have to make another run May 18 to capture the Verizon P1 Award in the Fast Nine Shootout.

The Verizon IndyCar Series team owner/driver of the No. 20 Fuzzy’s Vodka/Ed Carpenter Racing Chevrolet recorded a four-lap average of 230.661 mph to lead the 10 entries that surpassed 230 mph — the first qualifiers above 230 mph since 2003 — during the qualifications format revamped for 2014 to emphasize two days of competition.

Round 1, which featured 71 qualifying attempts, set the 33-car field for the May 25 race. Qualifiers 10-33 from Saturday will make another four-lap run on Sunday to set their starting positions. The fastest nine qualifiers from Saturday will compete in Sunday’s Fast Nine Shootout, where they will vie for the pole and set the first three rows of the race.

Newgarden, in his third season with Sarah Fisher Hartman Racing, bumped Ryan Hunter-Reay from the fast nine with his run in the final five minutes of the session. Five different teams are represented in the Fast Nine Shootout.

Kurt Busch, who is seeking to be the fourth driver to compete in the Indianapolis 500 and the Coca-Cola 600 in Concord, N.C., in the same day, was 12th after his initial qualifying run (229.256 mph). With an hour to spare before having to leave for the evening all-star race at Charlotte Motor Speedway, Busch moved into the top nine (229.960) and departed by helicopter satisfied with the day’s efforts. By the time he landed, Juan Pablo Montoya had bumped Busch from the fast nine with a four-lap average of 229.966 mph. Montoya was summarily bumped by Andretti.

The Verizon IndyCar Series boost level has been increased from 130 kPa to 140 kPa for qualifications today and Sunday.

The change in pressure adds about a 40-horsepower boost to the engines produced by Chevrolet (twin-turbocharged Chevy IndyCar V6) and Honda (twin-turbo-charged Honda HI14TT. The boost level will return to 130 kPa for practice on Monday, May 19, Coors Light Carb Day on Friday, May 23 and the 500-mile race Sunday, May 25.