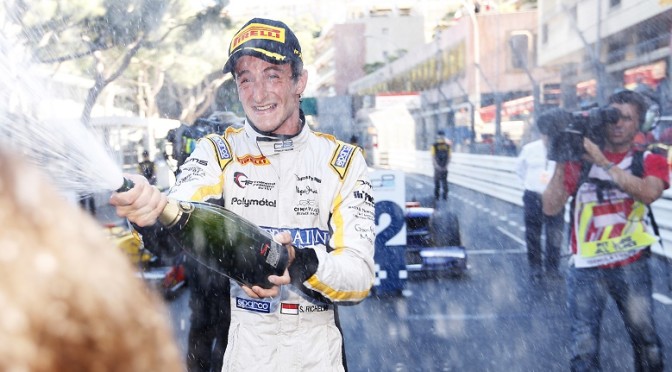 RICHELMI POWERS TO HOME VICTORY
Monegasque on top for sprint win
Stéphane Richelmi has claimed his maiden win in the best way possible, fighting all the way to the end in this afternoon’s sprint race for a lights to flag win in Monte Carlo ahead of Sergio Canamasas and Rio Haryanto.
The victory was set up at the start, when the local man made a strong start from pole to hold position: Haryanto had an equally good start to ride side by side with Richelmi to Ste Devote, but two into one won’t go and the Indonesian driver had to give way, allowing Canamasas to take advantage of his storming start to slide inside and into P2.
Teammate Johnny Cecotto was immediately filling the mirrors of the Caterham driver, allowing the Spaniard to focus all of his attention ahead, while behind them the rest of the field was shaking out, with Tio Ellinas touching the wall at Massenet and losing his front wing, while a front right puncture put Felipe Nasr out of the race at the Mirabeau.
The lead pair engaged in a race long battle, spending most of the race within 0.5 of each other as they threw everything they had at each other for the prestigious win while pulling away from the rest of their rivals: a safety car period to remove Artem Markelov’s broken car at Beau Rivage merely slowed them briefly before battle recommenced and the pulled away once more.
Behind them, however, Cecotto was paying for his early pressure as he dropped into the clutches of his rivals behind: a huge train of drivers formed behind the Venezuelan, who was simply concentrating on staying ahead of them. When the chequered flag dropped Richelmi punched the air with joy, having fulfilled a lifelong dream of winning a race at his home circuit, while Canamasas put in a super drive for P2 with Haryanto 6 seconds back to round out the podium.
Somehow Cecotto managed to hold on for 4th, a superb performance to hold off a clearly faster Arthur Pic, with Mitch Evans, Jolyon Palmer and Adrian Quaife-Hobbs crossing the line nose to tail behind them to round out the points positions, just ahead of fellow local Stefano Coletti and Conor Daly.
Palmer’s win yesterday saw his lead in the drivers’ championship extend over Nasr, 103 points to 57, with Cecotto on 49 points Julian Leal on 47, Pic on 40 and Richelmi’s win pushing his points up to 32. His DAMS team has also extended their lead in the teams’ championship over Carlin, 135 points to 105, with Trident solidifying third place on 71 points ahead of Campos Racing on 40 points and ART Grand Prix on 33 ahead of the next round at the Red Bull Ring in Austria.
Monte Carlo – Sprint Race
Not Classified
Fastest Lap: Tio Ellinas (MP Motorsport) – 1:22.807 on lap 22 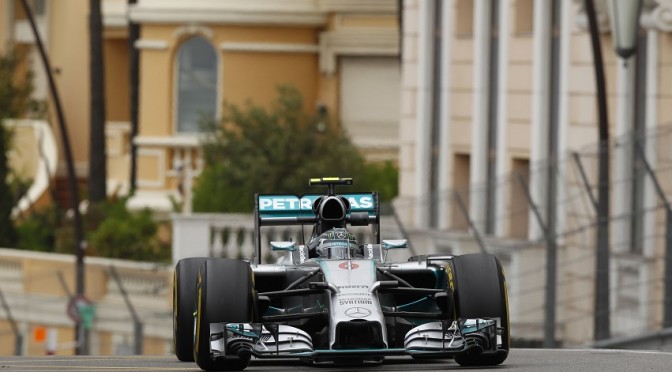 • Today´s result gives the team our six straight pole position of the season and the third front row lockout • Nico claimed his second pole of the season, qualifying just ahead of Lewis in second place • Nico´s sixth Formula One pole sees him overtake his father, Keke, who achieved five career poles • This marks the 23rd pole position for the Silver Arrows in Formula One Nico Rosberg I´ve felt really good in the car for the whole weekend and to get pole again here in Monaco is fantastic. The team has done a great job again this weekend because our performance is so strong even on this unique circuit – which shows that we have developed a really strong chassis and engine package for this season. I did a really great banker lap at the beginning in Q3 but Lewis was very close, so I gave it another try and pushed a bit more, unfortunately just a bit too much over the limit. I locked up the rears and then the fronts offline at the bumpy downhill part of the track before turn five but I just managed to get down the escape road. I have apologised to Lewis for having hindered the opportunity for him to improve his lap time. Now I will look ahead and forward to the race. I need to have a good start and I hope for a strong race with a good strategy. Lewis Hamilton I´d had a good weekend so far and I´ve just been concentrating on my own performance and working on the pace one step at a time. Qualifying was going well today but in hindsight, I should have nailed my best lap before the end of Q3. This is Monaco and there is always the risk of yellow flags here. Of course, I´m extremely disappointed that I didn´t get to finish my lap as I was a couple of tenths up. That´s motorsport. I have to get the best possible start and then see what we can do from there. Toto Wolff That was a thrilling qualifying session. We had two drivers fighting right on the edge for every thousandth of a second and that´s when mistakes happen, as they did today for Nico. It was an incredible fight between Nico and Lewis and, from the team´s perspective, it´s fantastic to have locked out the front row at the track where qualifying matters most. But we have a hard race ahead of us tomorrow and it´s one of the most demanding on the calendar. There is still a long way to go. Paddy Lowe It was a very close qualifying session and, as usual, the problem around Monaco is getting clean laps with the tyres in the right condition, and without causing obstructions to other cars. That makes it the most intense qualifying session of the year. The team did a fantastic job this afternoon, managing a faultless set of laps with both cars and progressing comfortably through each stage of qualifying, while an extremely close battle was unfolding between Lewis and Nico, as we saw. Unfortunately, this ended with Nico going along at Mirabeau. From a team perspective, it´s a great result to get both cars on the front row at Monaco, and a real encouragement to see that the W05 Hybrid is also strong at this circuit, which presents completely different challenges to any other.