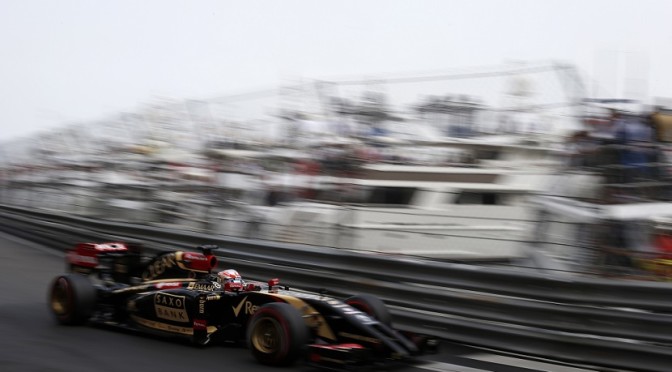 Romain Grosjean: “It’s good to finish the race here for the first time in my career and it’s good to get some points too. It started as a pretty bad Sunday for us with a puncture for me on the first lap after Adrian [Sutil] drove into me. We swapped to the soft tyres but it was impossible to overtake on these so we came back in for the super softs. The safety car timing didn’t help us as we’d just gone out on the new tyres, but that’s Monaco. You can have thousands of misfortunes in the race, but still be in the points at the end!”

Felipe Massa: I am very happy with seventh after starting 16th on the grid. I took some risks when I changed strategy at the safety car and had to make my tyres last, which they did. I made the most of the opportunities I had with other cars making mistakes or retiring. Many things could have happened so I am pleased they worked out for the best. A tough weekend turned into a positive one.Valtteri Bottas: We had an issue with the power unit which is frustrating. There are some investigations to do to find out exactly what happened. After the start I was quickly in the points so it could have been a good weekend. Felipe finished seventh so the team can walk away with something. We now look towards Canada where we hope to be strong due to the nature of the track.

DANIEL RICCIARDO: “The race really came to life towards the end. It started off not so well and it’s a really short run to Turn 1, so that was frustrating. Then we got Seb due to his reliability and Kimi had a puncture and we sort of got back to where we were hoping to be. After the re-start we were just saving the tyres to the point that we could get to the end and then, with 20 laps to go, I thought they would be okay so I pushed. It was the first time in the whole race that I felt like I was really driving the car and we caught Lewis. It was fun but I couldn’t get him, so I have to say the race finished better than it started.”
SEBASTIAN VETTEL: “It’s disappointing. I had a good start and then we lost boost pressure from the turbo, so I had no power and had to retire. The team did everything they could. I felt quite helpless in the car, so I was asking for an answer of what we could do, but there wasn’t anything at that stage. We fixed some problems yesterday with the ERS, but some more came today with the turbo, but we will move forwards and it will be good for us soon.”

Kamui Kobayashi: “Even though we finished in 13th I’m really not happy as I’m sure I’d have finished in the points if Bianchi hadn’t hit me when he forced his way past. The car was basically undriveable after that so just finishing is a good result, and the team did everything they could to help us finish as high as possible today – good strategy and great stops, but when you’re overtaken by being hit out of the way it’s obviously not good.

“I had a clean start, staying ahead of Bianchi and passing Chilton into turn one. Heading down towards the hairpin I avoided the debris from the Force India and was up to 15th under the safety car. With the retirements that was soon 13th and then 12th and the car felt pretty good at that stage.

“We stopped for the first time on lap 25 under the second safety car and went onto softs and rejoined in 12th with Raikkonen and Bianchi behind me. Then, as we went into the chicane after the tunnel, Bianchi hit me on the side and I had to cut through the chicane to avoid more contact. I don’t really know why nothing was done about that as he basically just forced me out of the way by hitting me which meant both the Marussia and my teammate could pass and after that the car felt really bad. The impact had caused a lot of damage to the sidepod and the floor and I lost a lot of rear downforce so from that point I was losing time without being able to do anything about it.

“I managed to get the car home ahead of Chilton but with the way the race ended I think the whole team feel like we lost out through no fault of our own. We need to keep our spirits up and use this experience to make us even more determined to get ahead of our nearest rivals and we’ll just keep pushing.”

Nico Hulkenberg: “Ten points today is a great reward after such a difficult race. The last twenty laps were really tricky because my supersoft tyres were at the end of their life and it was hard to hold off the cars behind me and stay away from the barriers. There were a few close moments when I kissed the wall, but I survived and managed to hold on to fifth place. Fortunately my car was quick in the right places – going into the tunnel and also through the final corner. There were some enjoyable moments in the race, especially my move on Magnussen. He had to let the Toro Rosso back through and he lost a bit of momentum so I saw my opportunity to stick my nose down the inside of turn eight. On a track like Monaco it gives you a big smile to make the move stick.”
SergioPerez: “I was in a battle with Nico, who was ahead, and I went to take the apex normally. I was on the racing line and ahead of Jenson [Button] when he clipped my rear wheel and spun me around into the barriers. I did not expect him to be there as there wasn’t really any space for another car there. It was very unlucky. As a racing driver you have good and bad Sundays but this is definitely one I want to forget as soon as possible. It is disappointing that we lost a big chance to score a good amount of points, but the car felt much better here than in Spain, as shown by Nico’s result. This is a very positive signal looking ahead to Montreal.”
F1Weekly podcast # 815