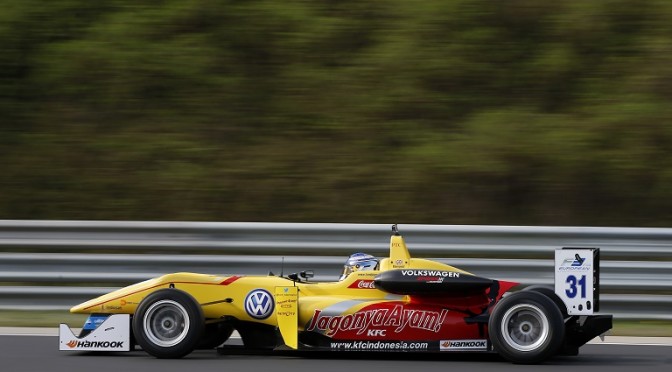 Nine races of the 2014 FIA Formula 3 European Championship season already have been contested and Frenchman Esteban Ocon (Prema Powerteam) left his mark on them. The Lotus F1 Junior won three of these races and is the championship leader with a 57-point lead over the best of the rest. The toughest rival of the 17-year-old rookie is the clearly more experienced Briton Tom Blomqvist (Jagonya Ayam with Carlin). The son of former World Rally Champion Stig Blomqvist currently holds second position in the championship. And the 20-year-old set himself the goal to reduce the gap to Ocon, in the fourth meeting of the season, held at the 4.381-kilometre Hungaroring, located not far from Hungary’s capital Budapest.

Blomqvist is the only driver apart from Ocon who succeeded in winning more than one race, in the season to date. He prevailed in one of the season kick-off races at Silverstone and at the street circuit of Pau, Southern France, he added another race win to his tally. Furthermore, Italy’s 18-year-old rookie Antonio Fuoco (Prema Powerteam), 19-year-old Austrian Lucas Auer (kfzteile24 Mücke Motorsport), the Netherland’s 16-year-old rookie Max Verstappen (Van Amersfoort Racing) and the experienced 22-year-old Swede Felix Rosenqvist (kfzteile24 Mücke Motorsport) also have got a race win each under their belts.

For the FIA Formula 3 European Championship, it will be the debut appearance at the circuit that was the venue of the first Formula 1 GP in the Eastern Block, back in 1986. The two days of pre-season testing in early April, however, offered the young drivers the chance of familiarising themselves with the characteristics of the track. The fastest lap times in the four sessions were set by Jordan King (Carlin), Max Verstappen, Felix Rosenqvist and Tom Blomqvist, with Ocon’s best positions on the time sheets having been a second place.

Tom Blomqvist (Jagonya Ayam with Carlin): “I’m looking forward to racing at the Hungaroring. The track layout is really interesting and suits the characteristics of a Formula 3 car well. Together with the possibly high temperatures, the Hungaroring will represent a new challenge for us. On the other hand, overtaking will be anything but easy and so, a good grid positions once again will be a key factor for a successful race. I’m travelling to Hungary in a confident mood as I was very competitive at any venue we race at, so far. Silverstone, Hockenheim and Pau are circuits that differ a lot but my car proved to be fast everywhere.”

Please find the time schedule and the entry list for the race weekend at the Hungaroring at the official website www.fiaf3europe.com.