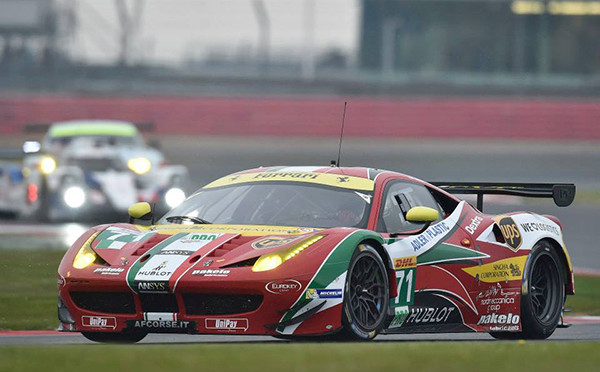 In a little more than two weeks, the spotlight will turn on the most prestigious competition in the Endurance landscape, the 24 Hours of Le Mans: among the 168 pilots, there will be also Davide Rigon, in pair with Calado and Olivier Beretta, at the wheel of the Ferrari 458 AF Corse. The talented driver from Veneto (Italy) arrives to the appointment which is worth a season, on the strength of the podium at Spa-Francorchamps and of fifth place obtained in the opening race at Silverstone, which launched the crew #71 at fifth place in classification. “The evaluation so far is certainly positive. At Silverstone we collected less than deserved, while at Spa everything went great. The maximum would be the second place”, Davide Rigon comments. “Now we have several kilometres behind and begin to be very familiar with the car and the team, with whom there’s a great feeling”.

Along with Bruni and Vilander, you have made Ferrari and AF Corse the leaders in their respective classifications. What are your goals?

The main objective is to bring Ferrari to success among the Constructors and then, in succession, to achieve the titles for teams and drivers, thus trying to repeat the three of last year. We’ll try to win the Drivers’ Championship, even though we are rookies. For James this is the first experience in GT, while for me it’s their first season as official driver. Last year, thanks to 8Star Team, I had the chance to get to know the championship, but now I feel much the weight of responsibility. Thanks to AF Corse and Ferrari we have everything on hand to make it right. We are professionals and we have to give the 100%.

What about your relationship with the other Ferrari drivers?

There is a great team spirit and we work very well together, also sharing the data. Gimmi and Vilander are two champions with an extensive experience: I can learn a lot from them. We have a great engineer with whom we feel very well: we build the car in order to suit our needs.

After Silverstone and Spa, now it’s time for the 24H of Le Mans.

It’s the most important race of the year and one of the finest in history. All drivers wish to run the 24H of Le Mans at least once, for its charm and importance. Perhaps it is worth more than a win in Monte Carlo. For me it will be the first time and I cannot wait.

What are your goals?

The objectives are clear. We have to run for the podium, if not for the victory. We know that it will be very tough – especially for us, considering that we are at the debut – although on our side we can count on Olivier Beretta, who can already claim a victory. We are ready to challenge ourselves: we have already analyzed and studied different strategies and we’ll have an important reference with our fellows Fisichella-Bruni-Vilander, who know this race very well. We’ll try to keep their pace in the race.

Have you already had the chance to get to know the track?

I will experiment the track for the first time in the official tests before the race. As far as now, I’ve had the opportunity to study the circuit through the simulator and some videos. It’s a very long track: I’ve never driven on a circuit where a complete lap takes nearly 4 minutes.

I have already run three times a 24H, although all of them on the track of Spa-Francorchamps. In 2008 I won at the debut in the FIA World GT with the Ferrari of Scuderia Italia, while in Blancpain Endurance Series I had to retire both times, including last year in the last hour of the race, due to an engine failure. I know what it means not sleeping at night. It’s a really tough race where we should not leave anything to the rivals.

What kind of physical preparation is required for this kind of race?

This year, with my trainer Emiliano Maraldi of the Driver Program Center of Forlì, we are working primarily on floor exercises with aerobic workouts and on reflexes, continuing with the program of last year. In terms of physical strength, endurance races are less demanding than Formula ones, while they require a greater resistance to heat and to extended “suffering”. Especially in the 24H I’ll have to stay several hours in the car, with stints of even three hours. For this reason, I don’t want to arrive unprepared to this important appointment.