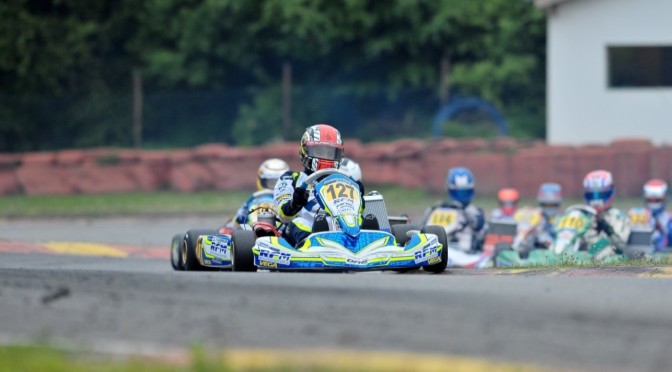 Fresh from his win at the Super Masters Cup at La Conca last weekend, Enaam was invited to race in Germany, in Ampfing.  This was part of the National German Series known as DKM (Deutsche Kart Meisterschaft).  This series is noted for its varying tracks across Germany and Belgium. Although an unscheduled event in Enaam’s  racing calendar, it would provide new challenges which would only help develop a more comprehensive driver.  Racing on unknown tracks and against local more experienced drivers meant he had a lot to gain this weekend win or lose.

Friday morning, and the very tight and twisting track was proving to be a tough test for Enaam.  The pressure was further increased as the Team learnt that Sebastian Vettel, the current Formula One World Champion, was competing at the event. Enaam would have to be outstanding to impress this crowd.  During testing Enaam showed some consistency in clocking the top 5 fastest times.   Enaam persevered with his team analysing data and making mechanical tweeks to the kart but he kept falling short against the local drivers.  He finished a poor 11th in qualifying.  Disappointed but not defeated he worked through the night to hopefully improve in the heats on Saturday. 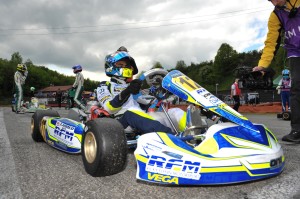 The rain on Saturday further dampened the RFM Team’s mood and Enaam knew he would have to race out of his skin to win in Ampfing.  And that is exactly what he did!  He drove two fantastic heats with perfectly executed starts, whilst making the relevant adjustments on course enabling him to win with a very wide margin. The pole position for the Pre Final on Sunday.

The sun was out on Finals day to greet the racers.  With an 18 Degrees temperature, it meant Enaam would have to revert back to a dry weather style of driving.  If he could master the two corners he would be a threat in the finals.  The Pre Final begun well and Enaam managed to maintain the lead for the majority of the race.  However, on the 19th lap a crafty manoeuvre by the 16 year old local driver Thomas Preining, knocked Enaam back into 2nd  position, and this is how the race finished.   Enaam felt disappointed and patronised by Preining’s manoeuvre and wanted to settle the score in the final. 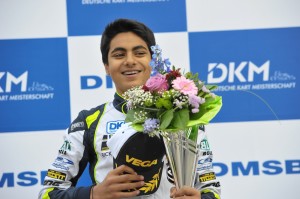 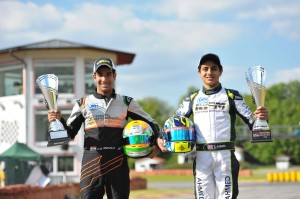 The Final started with Preining leading and continuously trying to play a “cat and mouse” style of game with Enaam. He would slow down to allow Enaam to get close, and then suddenly speed off again trying to deflate the fight out of Enaam.  Karma prevailed as Preining’s cockiness eventually put him out of the race.  As he was attempting to slow down his kart oiled up, and Enaam smartly adjusted his carburettor and overtook him.  Preining was parked on the side whilst Enaam cruised to victory. Who had the last laugh?  Enaams 17 point lead meant he was well on his way to winning the championship formally won by drivers such as Micheal Schumacher (1987), Nico Hulkenberg (2003), Sebastian Vettel (2001) and Robert Kubica (1999).

“I like to listen. I have learned a great deal from listening carefully. Most people never listen” – Ernest Hemingway

Sebastian Vettel: “Canada is a very demanding high-speed racing track, which is surrounded by rails and concrete walls. There is definitely a high risk potential, especially in Turn 15, where you will soon get to know the notorious “Wall of Fame” should you be driving a few centimetres too far to the right. The first danger zone is already at the start. In the very narrow right-left passage, it’s all about avoiding contact with the other cars, otherwise there will be a crash. It is not uncommon for the safety car to make an appearance at the Canadian Grand Prix. Before the Grand Prix, I’m travelling to Toronto to spend a day with Infiniti and their guests on Wednesday for an Infiniti driving day, which will be fun. I’ll be performing a few Hot Laps with David Coulthard and some Infiniti guests.”

Daniel Ricciardo: “I doubt anyone on the grid lacks motivation, but there’s definitely a little extra edge to it at some circuits. They tend to be the ones that demand the most from you and hold real consequences from getting it wrong. Montreal definitely falls into that category. Each of the chicanes (the hairpin too) is an opportunity to make up, or lose, time but the crucial corner is probably the last one: you arrive at top speed so there’s a lot to be gained in braking if you get that just right, and then the way you go over the kerbs is worth more time. The flip side is that it’s very easy to get wrong and if you do then there’s that big wall waiting. It’s a clear choice: some guys will play it safe and sacrifice half a tenth to get through there cleanly; others who will take a risk and go flat out trying to find a little bit. The nearer you are, the faster you’ll go. Give the wall a kiss and you feel pretty good: Kiss it too hard and that’s it!”

You’re the front-end mechanic for Seb? Explain how that works, what are your responsibilities? The front end mechanic’s main responsibilities are to ensure that the front end of the car is assembled correctly. This includes all the suspension components on the front of the chassis. Additionally we’re responsible for driver comfort in the cockpit. This includes the driver seat, steering controls brake and throttle pedal.What’s Seb like to work with when you are setting up the car?Pretty much the same now as when he started in 2009. He has not changed much and is very precise in his feedback. It’s the engineers’ job to coordinate what’s being changed on the car, but if there’s anything Seb wants to change then that is very simple and easy.What are the general requirements for set-up at the Circuit Gilles Villeneuve?It is obviously very different from the last race in Monaco, because Montreal is a very high-speed track with very long straights. It’s a very good atmosphere at the circuit. It’s always full of people: it’s the only race in Canada and, as the track is very old, you can get very close to the grandstands and the fans. It’s enjoyable to see the fans so close. I like it a lot.What’s your best memory of the Canadian Grand Prix?We have won it before and therefore it will always be a good one. I always remember standing on the grid for two hours in 2011. I was freezing cold and it was raining so much, but yes: winning the race was always a good memory.How tough was the 2011 race for you – it was a four hour race! The toughest bit was the weather. It was so cold and we only had a fire-proof suit on which was definitely not warm when wet and you get heavy standing there for that long without moving around; waiting for the race to progress and for the weather to get better, that was obviously a tough one.

To lose the race in the final lap was a shame, I think we won plenty of races that year and we covered it anyway because we won the Championship.In two sentences, describe the Montreal experience, on-track and off-track?We see more of the on-track side as we spend more time in the garage, but it’s a fantastic and vibrant city. There are different parts of the city. If you want to go to the French quarter and have great food, you can and if you want to go downtown and have a pizza, then you can do that. It’s a great place. We always say that the three M races are very good: Montreal, Monaco and Melbourne and all of them are races in the city, so it just gives a different atmosphere.