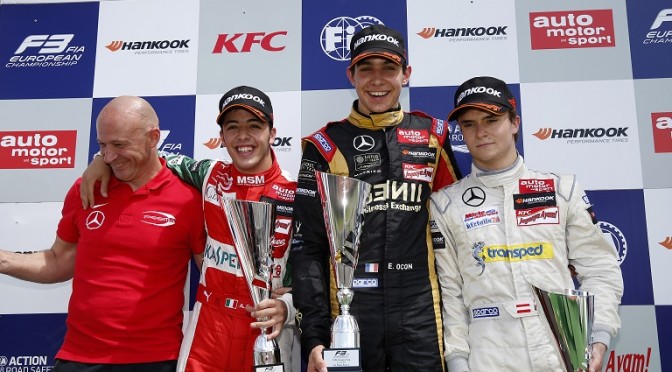 Starting from pole position, Frenchman Esteban Ocon took the lead from Antonio Fuoco and Lucas Auer. Jake Dennis (Carlin) charged from eighth place on the grid to fourth, but the British rookie was given a drive-through penalty for jumping the start. After that, the Carlin driver dropped back to 22nd place. 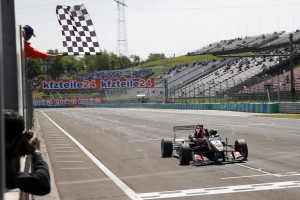 Out in front, Ocon extended his lead as Fuoco failed to pull clear from Lucas Auer. Fifth-placed Max Verstappen (Van Amersfoort Racing) came under increasing pressure from Tom Blomqvist, Antonio Giovinazzi (Jagonya Ayam with Carlin) and Gustavo Menezes (Van Amersfoort Racing) and couldn’t make any mistakes. On lap nine, the 16-year-old son of ex-Formula 1 driver Jos Verstappen was called into the pits for a drive-through penalty because of exceeding the track limits on several occasions and lost his fifth place to British driver Blomqvist.

Ocon managed to keep on extending his lead from team-mate Fuoco until the chequered flag was out and he eventually crossed the finish line with a margin of almost seven seconds over his opponent. Lucas Auer, Felix Rosenqvist, Tom Blomqvist and Italian, Antonio Giovinazzi followed in third to sixth place while Gustavo Menezes scored his best season result to date by finishing seventh. Behind the US driver, Puerto-Rican Félix Serrallés (Team West-Tec F3), Nicholas Latifi (Prema Powerteam) from Canada and Sweden’s John Bryant-Meisner (Fortec Motorsports) rounded out the top ten.

Esteban Ocon (Prema Powerteam): “This time, I made good start and I was able to pull a gap quite quickly. Then, I tried to save my tyres as much as I could and I concentrated on the track limits to avoid getting a drive-through penalty. I succeeded in both aspects. I also reckon that it is easier to manage your tyres when you are in front.”

Antonio Fuoco (Prema Powerteam): “After four races in which I made a mistake of some sort, this race finally was quite good. Unfortunately, my tyres degraded, leaving me unable to keep up with Esteban. Still, I managed to keep Lucas at bay, although I believe that he was able to drive faster than me.”

Lucas Auer (kfzteile24 Mücke Motorsport): “My start was good. In the first six laps, I had a few smaller issues, but then I found to my rhythm and I was quicker than Antonio, who was in front of me. However, as my tyres degraded over the race, I wasn’t able to overtake. I am not yet looking at the points’ standings, so I am not particularly worried by Esteban’s huge lead. I am working from one race to another, because I know that there still are many things that can happen.”