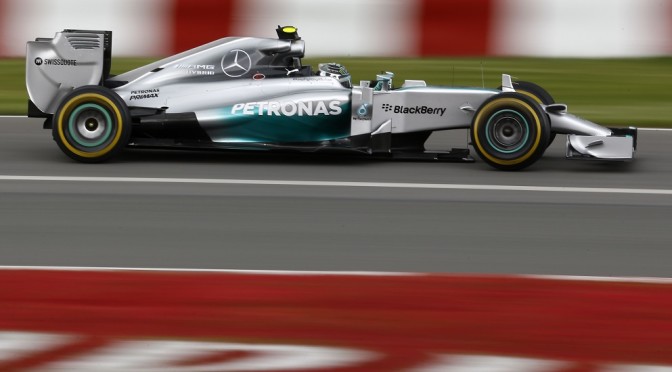 It´s been a great weekend so far and I´m really pleased with how I have been able to improve my set-up from session to session. Even before Qualifying we made some quite big changes and they worked out perfectly. So I am very happy with starting from pole tomorrow. That was very important as there aren´t many opportunities to overtake here, particularly if you are in the same car. I think it will be a battle between the two of us out there tomorrow as the gap to the other cars was quite big in Qualifying today and also on our long runs on Friday were strong. This is a such a good track here in Montreal and the fans create a special atmosphere so I hope we can put on a great race tomorrow for them.

Nico did a fantastic lap but it wasn’t the greatest qualifying session for me because I went wide a couple of times on my lap, in turns six and eight. It was very close, with just eight hundredths of a second in it, but Nico did the better job this afternoon. It’s great for the team that we have a one-two on the grid but I am expecting it to be a tough race: it’s not that easy to overtake here, especially in the same car and with Nico being so close on pace. I will do what I can tomorrow and we will be trying to score as many points as we can. I also want to say something about this amazing weekend in Canada. It’s one of the best races of the year, especially because of the fantastic fans who make the atmosphere something special. We love coming here and I hope we can put on a great race tomorrow.

It was a really exciting qualifying session, seeing how closely the two drivers were matching each other all the way through. They are pushing each other so hard and, between every part of qualifying, they were looking at overlays of their laps, checking the data and trying to find every little advantage. Nico delivered a perfect Q3 and actually did two laps fast enough for pole position. Lewis lost some time in the middle sector of his final lap and finished less than a tenth behind, which just goes to show there is no room for error when two drivers are fighting on such a high level. It feels like the other teams will give us a hard run tomorrow so it won’t be an easy race. But the priority, like always, is to make sure a Silver Arrow wins.

That was another very close qualifying between Nico and Lewis. They were pushing each other right the way through each of the three sessions but, in the end, Nico put together better laps in Q3 and took pole by just eight hundredths of a second. It was great to get another all-Mercedes front row and to have both drivers performing at such a high level. Looking ahead to tomorrow, we’re hoping for dry weather and looking to get through what is always a very tough race. Tyres, brakes and managing fuel consumption will be the big challenges.

– José-María López, who has led the FIA WTCC standings all season, picked up his second pole position of the year at the Moscow Raceway.
– Sébastien Loeb also made it into the top 5, clocking the fourth-fastest time. Yvan Muller, meanwhile, will start race 1 from sixth on the grid after narrowly missing out on a place in Q3.
– In his first FIA WTCC outing, Ma Qing Hua kept improving throughout the day. After recording the ninth-fastest time in qualifying, the Chinese driver will start race 2 from the front row of the grid.

Unlike at previous meetings, the drivers only had one hour of free practice to get to grips with the track. Yvan Muller used his experience from last year to clock the fastest time in each of the two sessions. Most of the drivers were sorely lacking grip and there was plenty of slipping and sliding at the most challenging corners of the Russian circuit.

It didn’t look like there was any prospect of conditions improving, after a thunderstorm soaked the track an hour before qualifying was due to start. But the sun came back out so quickly that the track was dry by the time Q1 got underway. By the end of the first twenty minutes, the four Citroën C-Elysée WTCCs had all won a place in Q2 by making it into the top 12.

The second session was much more closely-contested. José-María López clocked the best time, 4 hundredths of a second ahead of Gabriele Tarquini. Sébastien Loeb also secured a spot in Q3, with the third-fastest time. Yvan Muller, however, made a few minor errors, struggling to get a clear lap in. He was in fifth place with just a few seconds to go, but Tiago Monteiro ousted him at the last! After finishing the session in 9th place, Ma Qing Hua has secured himself an excellent starting position for race 2: the driver of C-Elysée WTCC n°33 will start from the front row.

Yves Matton, Team Principal, Citroën Racing: “Race after race, we are seeing qualifying get closer and closer. Today, more than ever, you really had to produce a perfect lap to win pole position, and that’s what Pechito López did. Sébastien Loeb, meanwhile, didn’t have a good Q3 and was pushed back into fourth place. Unfortunately, Yvan Muller wasn’t able to make it through to the final qualifying session, but he did enough to give himself a chance of points in both races. The other thing I’m really happy about is the performance of Ma Qing Hua. He kept on getting better and he can set his sights on a podium spot in race 2.”

José-María López: “I didn’t expect to find myself in pole position, particularly after free practice! I was a little bit nervous, because this is a very demanding circuit and I don’t know all the ins and outs of it yet. There are some corners where it is hard to judge how the car is going to handle. I made progress by looking at the data from my teammates and I felt like I made a real breakthrough at the start of Q1. We all work together and we share information openly.”

Sébastien Loeb: “The car was sensitive to drive and I tried to attack too much. In Q3, I think I must have made at least one error per corner! I could definitely have done better, but it’s still a creditable result.”

Yvan Muller: “What can I say? I’m annoyed with myself! I made two little mistakes at the start of Q2 and I didn’t manage to clock a convincing time. My tyres were gone, but I carried on to make sure I got a top-ten time. Then Tiago Monteiro produced a great lap and snatched 5th place off me. That’s racing…”

Ma Qing Hua: “It was a good start for me in my first race with Citroën Racing. The conditions changed a lot from one session to the next. I think that is particularly difficult for me due to my lack of experience. I ran into a lot of traffic in Q2. Without that, I could have done better. But I’m in a good position for race 2, so it’s a positive result.” 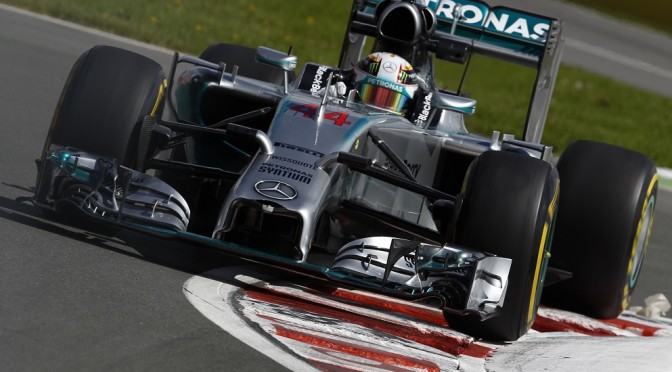 The first practice sessions for the seventh race of the season took place today at the Circuit Gilles-Villeneuve in Montreal.

– Lewis Hamilton set the best lap of the opening day, with Nico Rosberg posting the second fastest time
– Both sessions saw the Silver Arrows separated by less than two tenths of a second
– The threat of rain in the afternoon resulted in a higher than average quantity of laps being completed in the morning
– Both cars ran trouble-free, allowing the team to focus on set-up work for the weekend ahead

It felt pretty good out there today but we’ve still got improvements to make and there is more to come from the set-up and balance tomorrow. This is quite a technical circuit which is all about the kerbs and apexes; you have to have a car that reacts well to the bumps. You’re always trying to find the limit so we’re not quite where we want to be yet. The Ferraris looked quite close today and the rest of the field seemed closer in general but hopefully not too close! It’s very hard to overtake here so pole position is important. Nico looked very quick today as well so I have my work cut out for sure. We’ll find out everyone’s pace in qualifying tomorrow afternoon so let’s wait and see what happens.

That was a great day and I felt very comfortable in my Silver Arrow. This morning, we worked on some different things with the brakes which didn’t quite work out so we had to change that this afternoon. It was much better for the second session so I’m quite happy now with that. But I’m still a tenth off the quickest time so I’ll work hard with our engineers tonight to find that extra pace. It’s a unique track here and it’s very difficult to hit the kerbs just right. It was also great to see so many spectators here already today and I’m looking forward to the rest of the weekend.

It was an interesting day which threw up some surprising conclusions. One of our biggest jobs will be to analyse and understand why the option tyre didn’t perform as well on our car in comparison to the prime and also how to manage graining on the option during the race. It is a short lap here, which closes up the field anyway, but it feels like Ferrari might be pushing us harder this weekend. We will need to get every detail right to deliver our potential in the race, so there’s plenty of work still ahead of us this evening.

Today we focused on doing our homework for the race, looking particularly at tyre performance and fuel consumption. This is one of the most challenging circuits of the season in terms of fuel consumption and how we best use the 100 kg race fuel allowance. The threat of rain meant we ran more laps than usual in the morning session, including some high fuel work, before a more normal afternoon of short and long runs on low and high fuel. The car ran fine but we seemed to struggle a little with the option tyre, which did not deliver as much lap time as we had expected. This may open up some interesting strategies for qualifying.