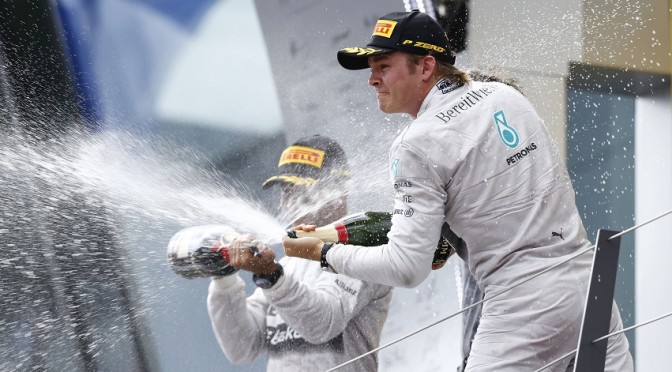 Nico Rosberg and Lewis Hamilton took a hard-fought one-two victory this afternoon at the Austrian Grand Prix to make it six one-two finishes in the opening eight races of the season – a feat only achieved once before in Formula One history. And Valtteri Bottas gets his first podium.

– Nico claimed his third win of the season and eighth consecutive podium after starting third on the grid.
– Lewis finished second after gaining seven places, securing the team´s sixth one-two finish in the 2014 season
– Both drivers ran two-stop strategies, running a tyre choice of option/prime/prime
– Seven of the top ten were powered by Mercedes-Benz and this was win 106 for Mercedes-Benz power in Formula One

That was an amazing weekend for us here. It was so great to be back again in Austria – for me, it felt almost like being at my home race in Germany! This is a great track, with amazing fans and at the end also with a great result for us. I have to thank the team for a great car and a perfect strategy. We chose the aggressive way to pit earlier and to overtake the Williams that way and that worked out quite well. We had to look after our brakes, which was a big job for the whole race. Also this worked out perfectly for me. Before the weekend, my target was to extend the lead in the championship, which I achieved. So I can be quite confident before the next home race for our team in Silverstone. A great job also from Williams, they were the second force today. Congratulations to them.

After what happened yesterday in qualifying, today was all about damage limitation for me, so I´m as happy as I can be with a P2 finish. I have had the pace in the car all weekend here but I wasn´t able to capitalise on that, so getting second place from a bad weekend is pretty good, I guess. I had a rocket start – it´s something we´ve be working hard on all year and it was one of the best I´ve ever had. You can´t ever plan what´s going to happen but I managed to put the car in all the right places and climb to P4 by the end of the first lap. We were managing the brakes a lot today, because I was in traffic for most of the race and it was the most important thing to bring the car home, so that was a real balancing act. But the strategy worked really well for me to get into second position, then I tried to start pushing Nico – but he didn´t make any mistakes and I didn´t have the chance to overtake. The guys did a fantastic job today to get us another one-two and the fans here in Austria have been insane. Next race is in Silverstone and all the positive energy from my home fans; it will be a special time and I´ll be going all out for the win.

Valtteri Bottas
It’s difficult to explain how I feel right now. That was the best champagne I’ve ever tasted. All the hard work that the team puts in shows in moments like this. I had one pitstop that really put in me in the fight and that changed my race, so well done to the boys for that. I had put in a good lap before that and so I got in front on Felipe and from there I could manage my pace with the cars in front. Having both cars score good points is what we wanted and so third and fourth for the team is a great result. There are still two places to go up the podium, but for now we will enjoy this moment.
Toto Wolff

A fantastic result for us here in Austria and we are just delighted to get a one-two finish today. The race was all about management: managing the brakes because this is such a tough circuit for them, and also looking after the Power Unit to make sure we didn´t have any repeat of the problems in Canada. Nico and Lewis did an incredible job – a controlled drive from Nico, where he let the race come to him and let our strategy play out, which worked really well; then a really typical dynamic drive from Lewis, who just did an amazing first lap to climb from 9th to 4th. After that, the guys pushed each other hard but we made sure to bring the cars home, too. It´s a great day for the team to take another one-two finish and congratulations, too, to our partners at Williams, who made it four Mercedes Benz engines in the top four this afternoon.

We woke up this morning knowing that we had a big job to do today given our less than ideal qualifying positions. We had a lot of work to do with the strategy to get the cars to the front. Both drivers had great starts and a good first lap, particularly from Lewis which meant we were in P3 and P4 after lap one. Behind the scenes we were doing a lot to manage the condition of the car during the race, at the same time as running a strategy to overtake the Williams, who looked to have very strong pace today. To finish where we did is a credit to the whole team. Well done to Williams for getting P3 and P4 and congratulations to Mercedes-Benz for securing seven out of the top ten positions with no retirements at this particulary demanding circuit.

What a weekend for Carlin – a fantastic one-two in Race 1 with Emil Bernstorff finishing second – and today the Brit went one better by pocketing his debut win in the category in dominant style. Jimmy Eriksson (Koiranen GP) drove a determined race to finish second and Richie Stanaway (Status Grand Prix) took the final spot on the rostrum.
Glorious blue skies and warm temperatures were perfect racing conditions for the second GP3 race of the weekend in Austria with Carlin’s Luis Sa Silva starting from reverse pole. However, Marvin Kirchhöfer’s morning did not start well – the German rookie stalled on the pre-grid and despite the best efforts from his ART Grand Prix team, he was unable to start the race. Alex Fontana and Alfonso Celis. Jr started from the pitlane after grid penalties issued after Race 1.
Sa Silva from Angola made a good start but Nick Yelloly (Status Grand Prix) made a better one as the two diced wheel to wheel on the lap one with the Brit passing the Carlin driver on the second lap for the lead of the race. Sa Silva came back at him though in a great duel and re-claimed P1. GP3 Series leader Alex Lynn suffered a puncture after being tagged on the opening lap and had to pit for new Pirelli rubber and finished outside of the points.
At the front of the race, Jenzer Motorsport’s Mathéo Tuscher tried to make a move on Sa Silva and the two made contact, with the Swiss driver’s car going airborne for a quick moment. His race was over, while Sa Silva pitted to repair damage to his car. This incident caused a bottleneck to the drivers behind with Bernstorff grabbing the lead of the race and a swap of positions between the Status Grand Prix drivers with Kiwi Stanaway demoting Yelloly. Eriksson also found a way through to move into third ahead of the Brit during the incident.
Arden International’s Jann Mardenborough who was running in the points spun off into the gravel and retired from the race, whilst Bernstorff at the front began to build a margin to Stanaway and Eriksson. Trident’s Roman De Beer moved up the order and was up to fifth at the midway point of the race. Stanaway was soon in the clutches of Eriksson with the Swede making the move stick for second position.
The battle for the third became a four-way battle with Stanaway, Yelloly, De Beer and Patric Niederhauser (Arden International) all fighting fiercely for the podium place. Bernstorff held an eight second advantage over his next rival Eriksson, whilst South African rookie De Beer got the better of Yelloly to rise to P4.
At the chequered flag, the day would belong to Bernstorff and Carlin after signing off with a stylish win. Eriksson re-enforced his position in the standings to achieve a second podium of the weekend, whilst Stanaway took his second podium of the season. Trident and De Beer were all smiles as they celebrated their first points of the 2014 GP3 campaign, ahead of Yelloly, Niederhauser, Patrick Kujala (Marussia Manor Racing) and Dino Zamparelli (ART Grand Prix) completing the final points positions.
Lynn holds the lead in the Drivers’ Standings on 62 points but Eriksson has gained on him (49). Stanaway lies third on 45 with Bernstorff moving into contention on fourth with 36 after also pocketing two extra points for the fastest lap today. Carlin head the Teams’ Standings with 102, ahead of Status Grand Prix (61), Koiranen GP (49) and Art Grand Prix (45) respectively.
The third round of the GP3 Series will take place at the home of British motorsport: Silverstone! Enjoy the next instalment of the thrilling GP3 Series on 04-06 July.
Spielberg– Race 2
Fastest Lap : Emil Bernstorff- Carlin: 1 :21.439 on lap 11 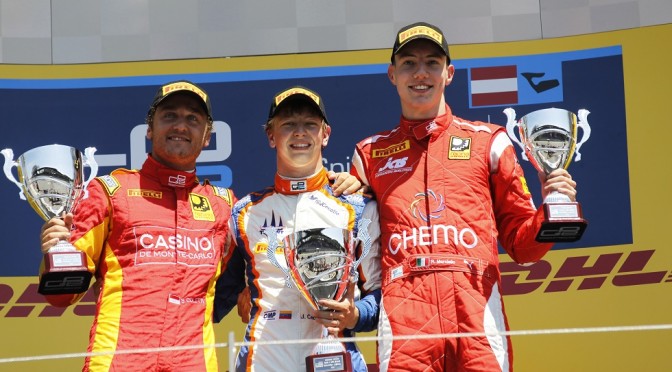 Johnny Cecotto claimed an emotional win this morning in the sprint race at Spielberg, making a blistering start to lead from lights to flag and brushing off attacks from his rivals all race long to take the top spot of the podium for Trident from the Racing Engineering pairing of Stefano Coletti and Ferrari Academy driver Raffaele Marciello.
The Venezuelan made up for yesterday’s disappointments by making a storming start from P3 to mug front row starters Alexander Rossi and Mitch Evans, who were split at the first corner by the fast charging Racing Engineering drivers. Further back there was trouble for Felipe Nasr, who was caught up in an incident as the field shook itself out at turn two, and was soon back in the pits and out of the race.
Marciello picked off his teammate and was quickly chasing after Rossi, slicing by the American with an opportunistic dive up the inside at turn 5 on lap 6 before heading after Cecotto, while Coletti was biding his time as he tried to protect his tyres from the increased wear in the hot conditions: he was in good shape to take advantage when Rossi started to struggle with a brave move around the outside ten laps later before taking the fight to those ahead.
Two laps later Coletti moved up another spot – lap after lap hounding Cecotto meant Marciello’s tyres were unable to deny his teammate anymore – and he was soon pushing Cecotto for the top spot. The Venezuelan was not to be denied, and drove majestically for a dramatic victory by just 0.7 seconds from Coletti, while Marciello dropped off the pace but just held on to the final podium position (his second podium this weekend) from Mitch Evans, with Rossi hanging on for fifth despite extensive pressure from Series leader Jolyon Palmer, with Julian Leal and Takuya Izawa closed out the points positions.
Palmer extended his lead in the drivers’ championship over Nasr, 117 points to 84, with Cecotto third on 76 points ahead of Leal on 50, Stoffel Vandoorne on 43 and Coletti and Arthur Pic on 41 points, while DAMS leads Carlin in the teams’ title by 149 points to 134, ahead of Trident on 98 and Racing Engineering on 66 points as the field turns its attention to the next round at Silverstone in just two weeks time.
Spielberg – Sprint Race
Not Classified
Fastest Lap: Stefano Coletti (Racing Engineering) – 1:16.629 on lap 22
F1Weekly Podcast # 814