The British Grand Prix weekend at Silverstone kicked off today with the MERCEDES AMG PETRONAS pair of Lewis Hamilton and Nico Rosberg leading the timesheets in the first two practice sessions.

– In total, the team has topped 10 of the 18 Friday sessions so far in the 2014 season
– Lewis stopped on track during P2 following an engine problem and was unable to complete the session
– The drivers completed a total of 96 laps during today´s two practice sessions, just under two race distances
– To mark the 60th anniversary of the first F1 win for Mercedes-Benz, with Juan Manuel Fangio at the 1954 French Grand Prix, the W196 Streamliner will be present in the team´s garage throughout the race weekend

The car felt pretty good here today but unfortunately I lost my most important run of the day this afternoon when I stopped out on track with an engine problem. We haven´t identified what the issue was yet but it shouldn´t impact the rest of my weekend. We will change my programme around tomorrow morning to try and recover the time that I lost and make sure that I can complete my race preparation with a long run. It´s not ideal but we´ll recover! Apart from that, Silverstone has been great so far. The atmosphere is incredible and the support is just amazing; I love seeing so many fans here enjoying themselves.

That was a very productive day and the car felt really great so I´m feeling quite confident for the weekend. We seem to be very quick here and my long run at the end of the afternoon was very good. The conditions were quite tricky out with a lot of tail wind which made it really difficult to find the right braking point at some of the corners. It´s not good news for us that Lewis had some reliability issues and I hope we can sort this out for the weekend. Finally, it´s great to be back at Silverstone. There are so many fans already and also many of the team Brackley and Brixworth are here. I hope we can give them a great show.

A mixed day for us here in Silverstone: the drivers looked competitive in both sessions but it was annoying that Lewis couldn´t complete his programme this afternoon because of an engine problem. Nico was able to finish his programme in a normal way with some good long runs and, because the data is open between both drivers, Lewis and his engineers will be able to learn something from that. I want to say a word for the incredible fans here, too. It was only Friday but we could see full grandstands and huge support for Lewis and the team today. This is what makes Silverstone such a special race on the calendar and we will be working hard tonight to make sure we can deliver a competitive and reliable performance tomorrow and Sunday. 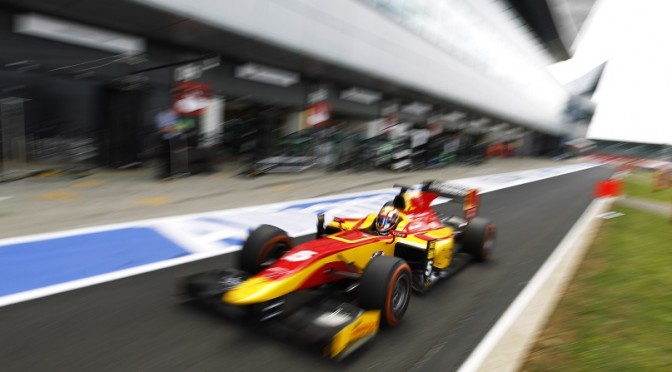 Marciello leads the way in Silverstone

Raffaele Marciello has got his Silverstone weekend under way in fine style by claiming the top spot in this morning’s free practice session and heading a 1-2 for Racing Engineering, with teammate Stefano Coletti and Alexander Rossi rounding out the top three positions.
The Ferrari Academy driver set a best time of 1:41.127 two-thirds of the way into the session, edging past his previous best time to hold onto the top of the timesheets by just over a tenth from the Monegasque driver in a tight session that saw 14 drivers within a second of the top spot.
The session got underway in sunny, and very windy, conditions, with Johnny Cecotto setting the first competitive time as the tyres got up to temperature, but it wasn’t to last: championship leader Jolyon Palmer soon stole the position before the Racing Engineering pair opened a private battle between them.
Marciello held the honours before the field returned to the pits, but it was a close run thing: the top three were split by under a tenth, and it was clear that more was required. When the field returned to the track they were pushing harder, as evidenced by off-track excursions by Palmer and Coletti among others, but it was the Italian who improved his time and claimed the honours.
Behind the top three Palmer, Cecotto, Felipe Nasr (who slowed with a mechanical gremlin as the chequered flag emerged), Stephane Richelmi, McLaren protégé Stoffel Vandoorne, Daniiel de Jong and Mitch Evans rounded out the top ten, but with a session so close this afternoon’s qualifying session promises sparks.
Silverstone – Free Practice
F1Weekly Podcast # 821