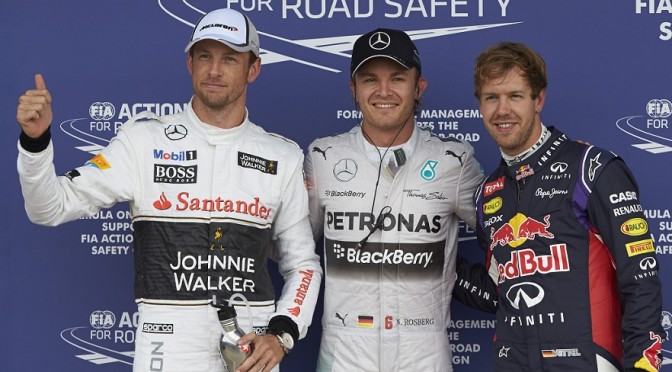 – Nico scored his fourth pole position of the year and his third pole in the last four races
– This marked the eighth time in nine races of the 2014 season that the F1 W05 Hybrid has claimed pole position
– Lewis failed to set a time on his final lap after choosing to abort his run at the end of sector one, he will start P6
– Both drivers ran the following tyre strategy: Q1, Inter/Option; Q2, Inter/Option; Q3, Option/Option

Wow, what a qualifying. It was so tricky out there this afternoon with the rain and the conditions changing so quickly. It´s very satisfying to get everything right in these conditions and be able to come out on top. Thanks to the team today for guiding me through the hour so well. My last flying lap was difficult because we were very tight for time and I was stuck right up behind Lewis. Luckily he didn´t finish his lap but I remembered that we were losing three or four seconds in the last corners when it was very wet so there was an opportunity to make a real improvement and that I should keep going. It´s a great opportunity to start the race from pole and I´ll give it everything to take the win tomorrow.

I made a mistake today and pulled out of the lap when I should have kept going. It was a tough qualifying with the changing conditions and we got through most of it really well, until the most important part. It was my decision, a bad call, and that decided my qualifying. I´m so sorry to have disappointed the fans here today as their support has been fantastic and I´ll do what I can to have a great race for them tomorrow. I need to have a start like I had in Austria two weeks ago and then do my best to get back to the front; you never know what might happen. It´s difficult when you´re just out of the car to express your emotions and see the positive but I´ll go back to the team and my family now and we´ll build up for tomorrow from there.

It´s a case of mixed feelings this afternoon after qualifying. I´m delighted for Nico that he got pole right at the end: he had nothing to lose, because he was P2 after his first run, and got the job done in the final sector of the lap where he was able to make up over four seconds compared to his previous lap. On the other hand, I´m really disappointed for Lewis – he had done a great job to lead the times, then just thought it was too wet to improve and decided to abort. It´s easy to be smart in hindsight but these are split-second judgement calls and today was a bad day at the office for him. The way I know Lewis, though, he will take that disappointment and make it into extra motivation for the race. We seem to have strong pace in wet and dry conditions, so I am sure we will see our two cars fighting for the lead sooner rather than later tomorrow afternoon. 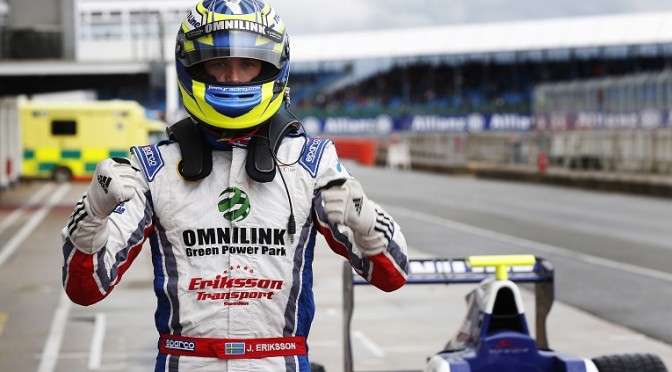 Swedish driver Jimmy Eriksson achieved his maiden pole in GP3 with a best laptime of 2:05.322 in a difficult qualifying session in the wet. Series leader Alex Lynn will join the Koiranen GP ace on the front row with Marvin Kirchhöfer heading the second row in third position.
The thirty minute qualifying session got underway with fine drizzle after heavy rain had fallen overnight. The 27 cars fed onto the Silverstone circuit but the session was red flagged due to an incident between the two newcomers Mitchell Gilbert (Trident) and Sebastian Balthasar (Hilmer Motorsport). The clock was stopped with 26 minutes remaining.
Once Gilbert’s Trident machine was returned to the pitlane, the session resumed. As the drivers got to grips with the conditions and found the limits, there were several spinners with Riccardo Agostini having a small moment at Turn 7 and Eriksson at Turn 2. The Swede was first to set a competitive time before Alex Lynn bettered his time. Mathéo Tuscher and Santiago Urrutia also spun but were able to continue as the times began to improve.
Fastest in Free Practice yesterday was Nick Yelloly and the Status Grand Prix driver grabbed P1, with Lynn improving but only to P2. Yelloly’s teammate Richie Stanaway produced a good lap to demote Lynn to third as the session hit the midway point.
The conditions continued to prove challenging with the changing conditions making it very tricky for the drivers. Stanaway went one better to sneak into P1 above his teammate by a tenth of a second posting the fastest middle sector. But Lynn who had patiently sat in the pits was about to clock a blinding lap, setting sector one and two in purple on the timing screens and lapping a second quicker than Stanaway. His teammate Emil Bernstorff soon followed suit into second before ART Grand Prix’s Marvin Kirchhöfer shot into P2.
Arden International’s Jann Mardenborough was on his best lap and managed to save his car from heading into a spin as he crossed the start/finish line to move up to fourth. With one minute remaining Eriksson lit the timing screens purple in sector two and three to snatch provisional pole.
At the chequered flag Eriksson held on for his debut pole in the category ahead of Lynn, Kirchhöfer and Dino Zamparelli. Mardenborough recorded his personal best qualifying of fifth in front of Bernstorff, Stanaway, Yelloly, Riccardo Agostini and Alfonso Celis. Jr. Five British drivers will start from the top ten in their home race.
Eriksson has now closed the margin in the Drivers’ Standings to just ten points to the current leader Lynn, make sure you watch Race 1 at 16.20 later today for the next exciting instalment of the GP3 Series.
Qualifying – Silverstone
F1Weekly Podcast # 825