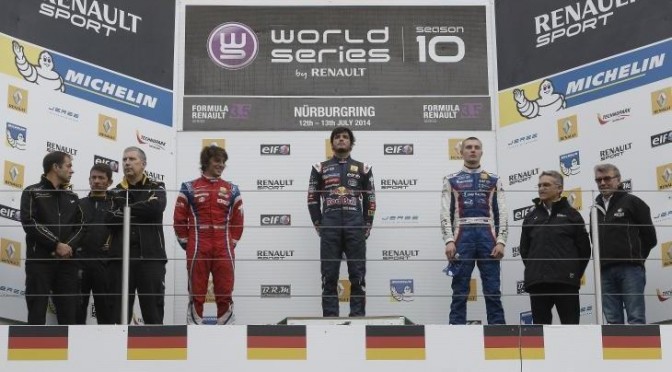 A PERFECT DAY FOR CARLOS SAINZ

Carlos Sainz (DAMS) returned to his winning ways on the return of the Formula Renault 3.5 Series to the Nürburgring. Starting from pole, his sixth of the season, the Red Bull Junior Team driver led from start to finish for the victory ahead of Roberto Merhi (Zeta Corse) and Sergey Sirotkin (Fortec Motorsports). With Pierre Gasly (Arden Motorsport) finishing outside the points, the leader in the general classification now has a 58 point lead from his French rival.

Earlier in the day, Carlos Sainz took his sixth pole of the year, setting fastest lap in the waning minutes of qualifying. The Spaniard lined up on the grid ahead of the Fortec Motorsports entries of Oliver Rowland and Sergey Sirotkin. Roberto Merhi and Marlon Stockinger (Lotus) completed the top five.

When the lights went out, Carlos Sainz held on to the lead. Despite a slow launch, Oliver Rowland maintained second position ahead of Roberto Merhi, who managed to get past Sergey Sirotkin. Straight away, the leading trio pulled away from the field, while Sergey Sirotkin did his best to stay in contact while driving away from Marlon Stockinger.

There were battles throughout the field and on lap 12 Pierre Gasly and Roman Mavlanov made contact, forcing the Frenchman to return to the pits. Meanwhile, Sergey Sirotkin closed the gap to Roberto Merhi and began to pressure the Spaniard.

Carlos Sainz: “To be honest, the pole this morning was a bit unexpected. We were on pace but not enough to get the pole! The race is another story, but I was happy with our pace. It was hard to build a lead in the opening laps with the yellow flags, and then the rain began to make things complicated. I had to bring the car home because I wanted to avoid making a mistake at all costs.”

Roberto Merhi: “I tried to pass Oliver at the first corner, but He did a better job exiting the corner. Then, I tried to pour on the pressure but I wasn’t able to make a passing move due to the yellow flags. Later, Sergey pushed me real hard. The way the last lap played out was unexpected, but I had to finish to solidify second place.”

Sergey Sirotkin: “I am happy to finish third. It is very important to catch up the championship. The race pace was good, but it was hard to pass and I couldn’t find an opening on Roberto and he didn’t make a single mistake. My team mate had a problem late in the race, he should have finished in my position, but that’s racing!”