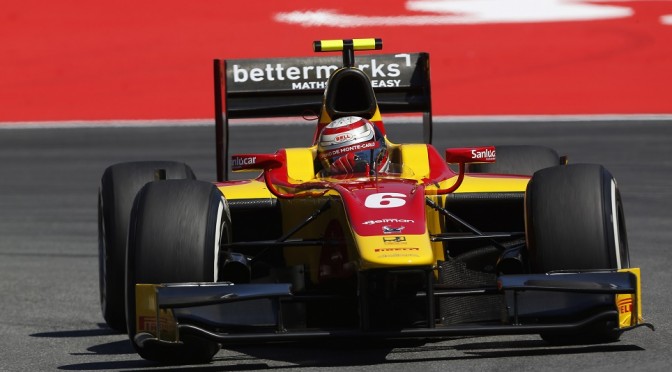 Coletti leads the way at Hockenheim

Stefano Coletti has opened his race weekend in Germany in fine style setting the quickest laptime of the free practice session in a 1:24.771, a tenth quicker than Stoffel Vandoorne. The Monegasque driver’s teammate Raffaele Marciello completed the top three.
The pitlane opened in scorching conditions with all twenty-six drivers feeding to the track on Medium Pirelli tyres. Series leader Jolyon Palmer set the early pace, but his teammate Stéphane Richelmi soon bettered the Briton’s laptime. Vandoorne was able to go even quicker but was edged out of the top stop by Coletti who lapped the German track in a 1:25.126 – 0.01s better than the Belgian driver.
Rookie Vandoorne found some clean air again, improving in the first two sectors and setting the third sector in purple. He dipped under 1m25s, but quickly after that Coletti was once again able to better the ART ace’s laptime by one tenth to sit pretty at the top of the timesheet. Behind the duo, Alexander Rossi put his Campos car in third, but as the temperature rose and with thirteen minutes left on the clock, rookie Marciello moved up to third. In the dying minutes, Conor Daly put his head down and on fresh rubbers moved up from P25 to fifth, finishing at the chequered flag ahead of Richelmi, teammate Nathanaël Berthon, Felipe Nasr, Johnny Cecotto and Rene Binder.
With everyone now up to speed with the circuit’s challenges, this afternoon’s qualifying session promises to be another GP2 classic.
Hockenheim – Free Practice