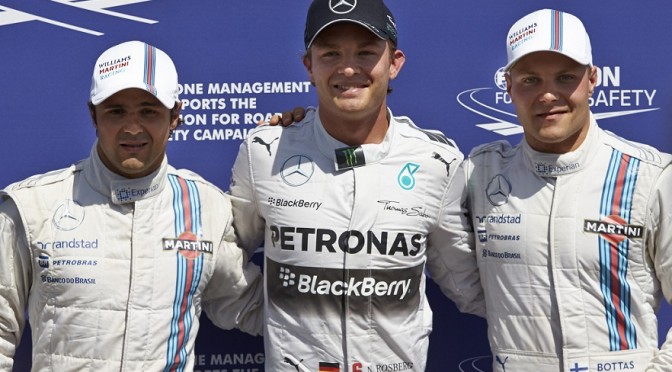 ROSBERG TAKES POLE FOR HIS HOME GRAND PRIX IN GERMANY

Nico Rosberg secured pole position for the team’s home race today at Hockenheim, with Lewis Hamilton suffering from a brake failure and a crash that ended his session during Q1.

That was a quite challenging Qualifying session. The option tyre lasts only for one quick lap and without FRIC we had a lot do adjust the set-up. I had a difficult start because I didn’t really feel comfortable with the balance in the braking zones but that gradually improved through the sessions. The quickest lap at the end was really a good one. So I’m really happy to start from the top position here at our home Grand Prix. But I can’t be too pleased about today because of the accident Lewis suffered, I´m glad he is fine. I would have preferred to have the normal fight for the pole with him. But I´m sure he will fly through the field as our car is still the quickest out there. So our German fans will see an exciting race tomorrow.

The car was feeling great today and it is ready for the race, so as a team we are pleased with the result. The last lap I had was almost perfect so I can’t fault the session. The Mercedes are still a bit quicker than us, but we are going to work hard tomorrow to get in front but it will be difficult. The aim tomorrow is to keep ahead of the Ferraris and Red Bulls and hopefully the cooler temperatures predicted will play into our hands

It was a very positive qualifying for us. I didn’t get the perfect lap, but we are second and third, so there are no complaints. The race will be difficult so today was more important than usual and so I am delighted with the result. Hopefully we can continue this forward and have a positive day tomorrow as well.

German rookie Marvin Kirchhöfer enjoyed his first pole position in GP3 and couldn’t have picked a better place to do it than at home in Germany at the Hockenheimring. The impressive ART Grand Prix star edged out Series leader Alex Lynn. Nick Yelloly (Status Grand Prix) completed the top three.
Hot temperatures again greeted Hockenheim for the 27 drivers in the thirty minute qualifying session. Jimmy Eriksson (Koiranen GP) was first to set the pace followed by Patrick Kujala (Marussia Manor Racing) and debutant Mitchell Gilbert (Trident).
Kirchhöfer broke into the 1m29’s, lapping almost half a second quicker than his nearest rival, whilst his ART Grand Prix teammate Dino Zamparelli lit the timing screen purple in the first two sectors but had to back off in the final sector due to a yellow flag from a small spin from Alfonso Celis. Jr.
Carlin’s Lynn flew to the head of the timings, with Zamparelli demoting Kirchhöfer to third. The Red Bull Junior driver then bettered his own personal best to increase his advantage over the pack and looked set to score a third pole position of the season.
But Kirchhöfer had his own plan and was not to be out done in front of his army of passionate fans: clocking the quickest laptime of the session with a 1:28.647 which was a mere 0.059s faster than Lynn. Yelloly also improved to third as the chequered flag was waved to record his best qualifying position of the 2014 season.
Kirchhöfer and Lynn locked out the front row, with Yelloly and Emil Bernstorff starting from the second row. Eriksson qualified in P5, in front of Gilbert – the Australian rookie in only his second race weekend producing a fine effort in sixth for Trident. Zamparelli, Richie Stanaway, Mathéo Tuscher and Dean Stoneman rounded out of the top ten.
Race 1 takes place later today at 16:20 and with record temperatures expected, a thrilling race lies in store as the fight continues to heat up in the Series.
.
Qualifying – Hockenheim
*Issued with a 5 place grid penalty following an incident in Silverstone Race 2
F1Weekly Podcast # 826