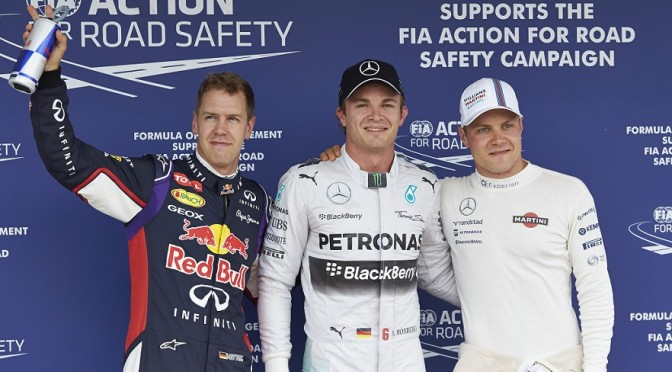 Nico Rosberg took pole position during qualifying at the Hungaroring this afternoon, while a fuel leak saw Lewis eliminated in the Q1 phase without setting a time.

That was a very tough Qualifying session today – especially with the rain at the beginning of Q3. It’s difficult to judge which braking point is best in changing conditions so I was a bit over the limit at times – especially into Turn One. I was lucky there, but in the end I nailed the last lap so I’m quite happy to be starting from pole. On the other side, it’s a real shame for Lewis and the team. I know how much it hurts to have technical failure where there is nothing you can do as a driver. We need to sort out the reliability issues but I know that tonight there will be great team effort to fix his car – just like in Hockenheim where the whole garage pitched in to help rebuild it. It takes away a bit of the excitement when there is no gloves-off battle because that’s what we are here for. But tomorrow is a long race and I’m sure that Lewis can get another good result.

I can’t really believe it today, there was just nothing I could do. There was an issue with the car as I was coming out of the second to last corner and then the engine just cut out. I thought we could get it back to the garage but then I looked in my mirrors and saw the whole rear end was on fire and that was it. Now we need to see what damage has been done to the car tonight and see whether the gearbox or engine needs to be changed. It’s getting to the point where it’s beyond bad luck now – as a team, we need to do better. Tonight, I need to somehow find the way to turn this into a positive for tomorrow, then build on that going into the race. It will be a very difficult afternoon as it’s one of the hardest circuits to overtake on. But these things are sent to try us and how I come out of it is going to be the most important thing.

SEBASTIAN VETTEL: “After Q2 I thought if we got everything right then we might have been closer to the Mercedes at the end than we were. Nico’s lap was very strong and it’s difficult to match them. But let’s see tomorrow, a lot of things can change if it rains and it may do tomorrow. We just have to focus on ourselves and, if we get a chance, try to make a pass, but the Mercedes is quite a bit quicker than us on the straights. The nature of the circuit here suits us more than it did in Germany, but we’re still quite far off the pace of the Mercedes.”
Valtteri Bottas: We are maybe a little surprised. We knew Red Bull were going to be really quick here, also Ferrari, and Mercedes like always. The nature of the track, in theory, for us is not the best but we have worked well as a team and brought updates that have worked well. We’re still missing some grip compared to some others cars but today was a good day for us. Third and sixth on the grid gives us a chance to get some good points tomorrow. 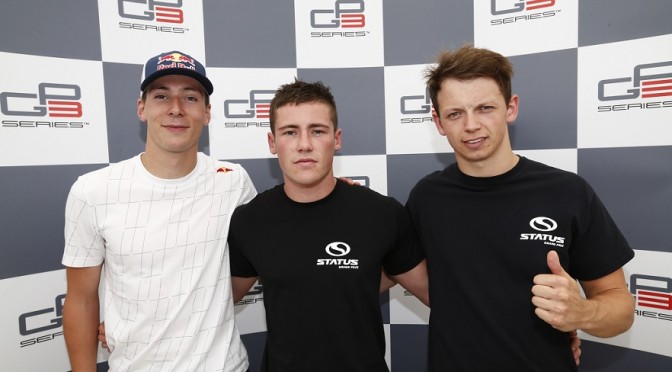 Kiwi Richie Stanaway claimed his maiden pole position in GP3 today, narrowly edging out Series leader from Carlin, Alex Lynn by a mere 0.035s. Nick Yelloly also from Status Grand Prix was in third making it an excellent start to proceedings for the green and black outfit.
Hot temperatures set the scene for the thirty minute qualifying session at the Hungaroring for Round 5 of the 2014 GP3 Series. ART Grand Prix’s Dino Zamparelli was the first driver to lap in the 1m33’s to go P1 by almost half a second with his teammate Alex Fontana his nearest rival.
There were small spins for Sebastian Balthasar, Mathéo Tuscher and Riccardo Agostini with all drivers avoiding contact with barriers, thus able to continue. Red Bull Junior team driver Lynn had set the fastest sector one but at the midway point of the session the Brit was in an unusual position of a lowly P24. His nearest rival in the Series Jimmy Eriksson was only place higher in qualifying at the midway point but got his head down and the Swede shot up to P3.
The Status Grand Prix duo of Yelloly and Stanaway went P2 and P3, with the Brit two tenths off Zamparelli’s best effort. Marussia Manor Racing’s Patrick Kujala rose to P2 whilst Zamparelli further improved on his quickest lap to increase his advantage at the head of the timesheet.
It was all change at the top over the next few minutes with Arden International’s Robert Visoiu posting the best lap, until Lynn jumped from P24 to provisional pole, a tenth faster than the Romanian. There was more excitement to come though with Stanaway setting the fastest time of the session in a 1:33.553.
With 2 minutes and 55 seconds left on the clock the session was red flagged when Alfonso Celis. Jr stopped after contact at with the barrier at Turn 5 and his car was in a dangerous position. Roman De Beer had also spun in a separate incident. Fontana had been on a flier on that lap and had to back off for the red flag with many others driver facing the same predicament on their push laps.
The drivers formed a large queue in the pitlane as they were eager to get back onto the circuit for one final attempt in the fight for pole. Yelloly lit the middle sector purple to move up to P3 but the session would belong to Stanaway at the chequered flag.  Behind Stanaway, Lynn and Yelloly were Visoiu, Zamparelli, Emil Bernstorff, Patric Niederhauser, Fontana, Kujala and Marvin Kirchhöfer.
Race 1 takes place later today at 16:20 local time as the quest for supremacy continues.
Qualifying – Budapest
*Issued with a 5 place grid penalty following an incident in Hockenheim Race 2
**Issued with a 5 place grid penalty following an incident in Budapest Free Practice
F1Weekly Podcast # 825