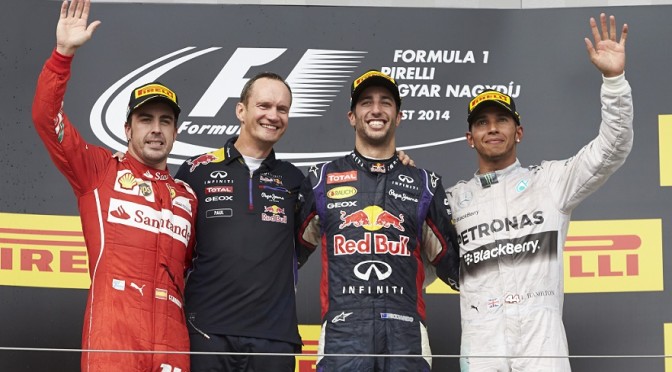 “Winning this today, it honestly feels as good as the first. It sank in a lot quicker this one, so crossing the line today I knew what was going on a bit more and it’s like I could enjoy it immediately rather than it being delayed, it was awesome. To have to pass guys again to win the race, as I did in Canada, makes it a lot more satisfying, knowing that we did have a bit of a fight on our hands – you beauty! In this environment now I feel, I am a different driver and in a way a different person, a different sportsman than I was last year. I’ve got a lot more belief in myself and it’s cool, I definitely feel like I belong here now and I’ve got confidence; obviously we’ve converted two races into wins this year so far and I think that confidence is showing. I’ve got some friends from Australia here this weekend, so the plan was to always have a few drinks tonight, so I think we’ve got an excuse to now!”

CHRISTIAN HORNER, Team Principal: “A fantastic grand prix and the performance by Daniel today was truly sensational. Starting in wet conditions, he benefitted from being a little bit further back and being able to get in for slick tyres at the first safety car and then really managed to make his strategy work on the soft tyres through the next stages of the race. We knew we’d have to make a final stop, which would put us behind Alonso and Hamilton who were trying to get to the end. But he closed the gap down quickly and then, with some fantastic overtaking manoeuvres in the last five laps, pulled off a dramatic victory to achieve the second in his career and our second this season. Sebastian’s afternoon was much more frustrating. Unfortunately, after a good start and some good battles, he got the call at the same time as Daniel to pit after the Caterham had an accident, but was too far round the last corner to make it into the pit lane. He then had to stop under the safety car which meant he lost some places. He was making progress but then had the spin and managed to avoid the pit wall, but he flat spotted his tyres and then had a problem at the restart. It was then a question of damage limitation, trying to run the hard tyres to the end of the race and he did a phenomenal job to keep Bottas behind him.” 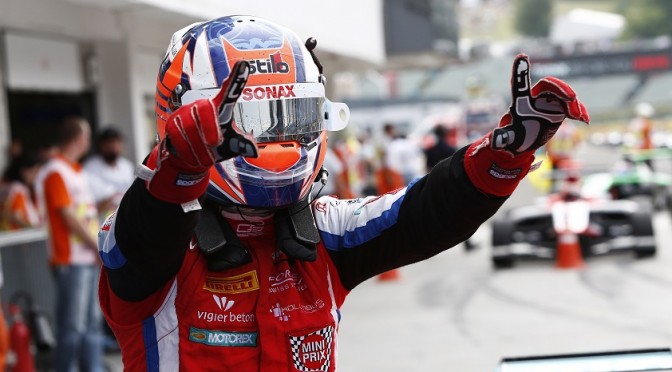 He’s back! The smile could not have been bigger for Swiss ace Patric Niederhauser who climbed to the top step of the podium today at the Hungaroring. The Arden International ace made a fantastic start to steal the lead and claimed his third win of his GP3 career, his first rostrum of the 2014 season. ART Grand Prix’s Dino Zamparelli was second, with Niederhauser’s teammate Jann Mardenborough third.
Zamparelli started from reverse pole but the Brit didn’t make the best getaway – Niederhauser in third made a lightning one to edge in front to sneak into the lead. Mardenborough from the front row also made a good start, with Zamparelli trying to claw back the lead going into Turn one. All three braked hard but it was Niederhauser who exited the turn in front with Zamparelli and Mardenborough duelling for second position.
Zamparelli fought back to move up to second on lap one with Niederhauser leading the Brit by just over half a second. Yellow flags were waved at turn 5 on lap three after Santiago Urrutia spun and his Koiranen GP machine had to be removed.
Series leader Alex Lynn held fourth which a charging Robert Visoiu hot on his tail. Lynn reduced the deficit to Mardenborough in third with a thrilling three-way battle developing which became the main focus of the race. Niederhauser started to pull away, increasing his lead to just over two seconds with his teammate falling ever closer into the clutches of the Carlin and Red Bull Junior driver.
The battle for P6 was also on: yesterday’s race winner Richie Stanaway (Status Grand Prix) had moved up two places and saw off the advances of Dean Stoneman (Marussia Manor Racing) and Carlin’s Emil Bernstorff during the midway point of the race.
With three laps remaining, Lynn mounted his attack on Mardenborough, he attempted an overtake going into turn one but backed off and waited to see if he could seize the opportunity elsewhere on the lap.
Bernstorff had been hounding Stoneman in the final laps and passed him before the chequered flag to snatch seventh. The joy and relief was clear for all to see when Niederhauser crossed the line to celebrate his best result of the campaign ahead of Zamparelli. Mardenborough held on under huge pressure from Lynn for the final spot on the podium, with Visoiu, Stanaway, Bernstorff and Stoneman collecting the final points on offer.
Lynn remains on top in the Drivers’ Standings going into the summer break. The Carlin star has 134 points compared to Stanaway, Eriksson, Bernstorff and Kirchhöfer who are on 103, 85, 85 and 80 respectively.
Carlin continues to hold the advantage in the Teams’ Standings on 233, with Status Grand Prix on 177 and ART Grand Prix on 144.
GP3 will return to action at the legendary Spa-Francorchamps on the 22-24 August 2014.
Budapest – Race 2
Not Classified
Fastest Lap : Mitchell Gilbert – Trident : 1 :31. 758 on lap 6 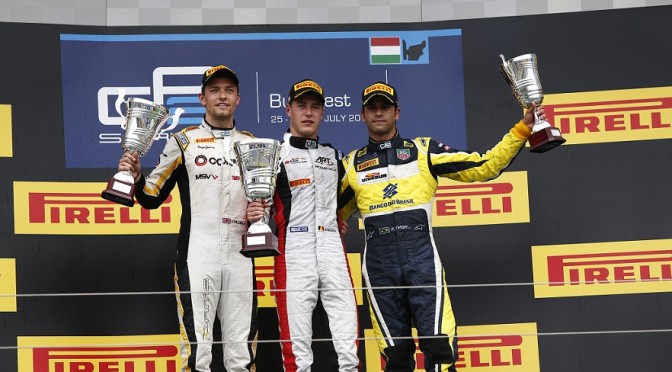 Vandoorne flies to victory in Budapest

McLaren test driver Stoffel Vandoorne delighted both ART and his F1 supporters with a crushing display of dominance in this morning’s sprint race in Budapest, taking the lead at the start and pulling away over the next 28 laps to easily lead home title rivals Jolyon Palmer and Williams tester Felipe Nasr to put himself third in the drivers’ standings.
The result was set up when the lights went out: Vandoorne had a solid start from P2 to edge into the lead despite a great start from Nasr, who followed the Belgian through poleman Nathanaël Berthon at turn one with Daniel Abt, Palmer, yesterday’s winner Arthur Pic, Conor Daly (courtesy of a tremendous start from P13) and Marco Sorensen behind them.
Palmer was showing his customary raciness, clinically dispatching Abt at turn one next time by and then holding off a strong fightback, and dispatching Berthon in the same manner a few laps later, with Adrian Quaife-Hobbs echoing the move on Sorensen just behind them. The Series leader was then on Nasr’s tail and was clearly not in a mood to hang about: he dived up the inside despite the Brazilian’s best efforts, returning the love on the exit and was through for P2.
Unfortunately for most of the other drivers, the usual problems with overtaking on the tight, technical circuit meant that, despite most of the field circulating nose to tail, there didn’t appear to be any way to get by, particularly as they were trying as much as possible to save their tyres to get to the flag.
But Vandoorne had no such problems: the Belgian ran at his own pace, setting fastest lap on the final tour to win at a cantor from Palmer, who was struggling with his tyres in the closing laps but just held off Nasr for P2. Behind them Berthon drove a strong race to hold off almost race long pressure from Abt for P4, with Pic resisting pressure from Daly for more points for 6th after a tremendous weekend for the Frenchman, and Quaife-Hobbs rounding out the points paying positions.
Palmer leads Nasr by 192 points to 149 as the grid departs for the summer break, with Vandoorne up to third with 109 points ahead of Cecotto on 100, Coletti on 96, Evans on 92 and Pic on 70 points. DAMS lead the way in the teams’ title from Carlin, 233 points to 215, with ART Grand Prix on 135, Racing Engineering on 125 and Trident on 122 as the grid takes a break before returning at Spa Francorchamps in a month’s time.
Budapest – Sprint Race
Not Classified
Fastest Lap: Stoffel Vandoorne (ART Grand Prix) – 1:32.541 on lap 28
F1Weekly Podcast # 825