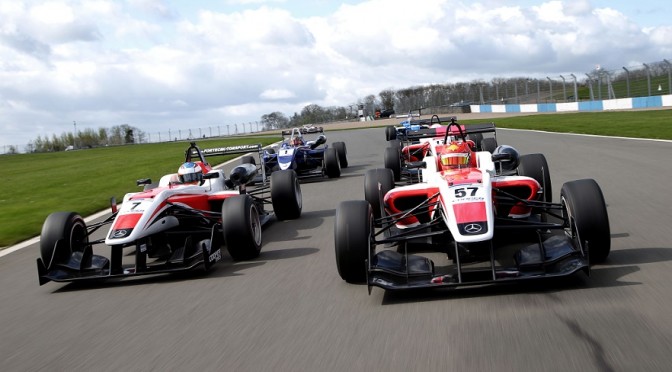 The Cooper Tires British Formula 3 Championship returns to Thruxton for the first time since 2010 this weekend (16-17 August), as the Formula 1 stars of tomorrow prepare to go wheel-to-wheel around the fastest track in the country – one that Mark Webber contends will really separate the men from the boys.

F3 has long been a successful breeding ground for future grand prix-winners and world champions, propelling more drivers than any other series towards the pinnacle of international motor sport.

As a case in point, the last time the championship visited Thruxton four years ago, two of the races were won by current Scuderia Toro Rosso ace Jean-Eric Vergne – whilst Jenson Button tallied his breakthrough F3 triumph around the sweeping, high-speed Hampshire circuit in 1999.

Rewind a bit further, and in 1983, a certain Ayrton Senna was crowned British F3 Champion at Thruxton at the end of an epic season-long duel with current Sky Sports F1 commentator Martin Brundle.

The 2014 campaign has thus far been dominated by F3 stalwart Fortec Motorsports and its dynamic duo Matt Rao and Martin Cao. Rao leads the points table arriving at Thruxton courtesy of a brace of victories to-date, but the ultra-consistent Cao is only four markers adrift and poised to pounce. Fellow British single-seater heavyweights Carlin and Double R Racing will similarly be represented on the grid.

F1-turned-sportscar convert Webber – who was denied a podium finish in the legendary Le Mans 24 Hours this year by late-race mechanical woes – reckons the current crop of British F3 competitors will truly be put to the test this weekend, after competing at Thruxton himself in Formula Ford and F3 in 1996 and 1997.

“I didn’t have much success here in F3, but my memory is of a very daunting and quick track in the junior categories,” recollected the nine-time grand prix-winner. “The first time I drove Thruxton, I was amazed by just how fast-and-flowing it was – there might be only a handful of corners, but they are all very quick! You need a good engine, because you’re at full-throttle a lot of the time.

“It’s evident straightaway that you need to be extremely confident with the car through the fast corners. It’s also a very bumpy track, which is something you have to respect, and you always need to be near the slipstream in qualifying. My engineer used to say to me, ‘No tow, no front row’ – and that was certainly the case at Thruxton.”

Race fans can famously get close to the action at Thruxton, and with not just British F3 but also Classic Touring Cars, Ferrari Classic and a number of other popular support series on the schedule this weekend, Group Managing Director Bill Coombs reflects that it will be non-stop high-octane entertainment throughout.

“British F3 will generate the fastest four-wheeled racing at Thruxton all year, as the best young drivers of the moment bid to prove their mettle around the most demanding circuit in the country,” said Coombs, who competed at Thruxton in British F3 himself in 1985.

“It promises to be an awe-inspiring spectacle with plenty of thrills-and-spills – and keep your autograph books at the ready, too, because history suggests you may even spot a future F1 star in the field…”