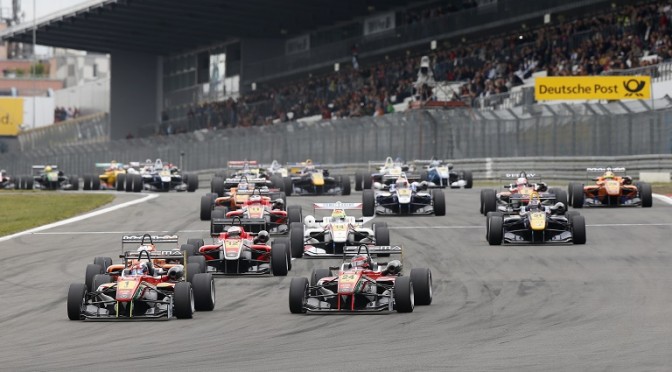 The Eifel: The hunt for championship leader Ocon to be continued

This weekend at the 3.629-kilometre Nürburgring, the FIA Formula 3 European Championship is going to contest its ninth race meeting of the 2014 season. Esteben Ocon (Prema Powerteam), a protégée of the Lotus Formula 1 Team, travels to the Eifel as championship leader, with his lead over second-placed Dutchman Max Verstappen (Van Amersfoort Racing) amounting to 94 points. Nonetheless, the two rookies mustn’t rest on their laurels as Tom Blomqvist (Jagonya Ayam with Carlin) and Lucas Auer (kfzteile24 Mücke Motorsport) are determined to give their very best to close in on Ocon and Verstappen and pass them in the overall standings. Austria’s Auer wants to do so at the wheel of his Dallara-Mercedes entered by kfzteile24 Mücke Motorsport, the only German team on the FIA Formula 3 European Championship grid. 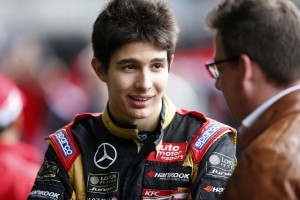 In time for the home race of his team, with 24 races contested, Lucas Auer proved to be in good shape. In his own home event, at the Red Bull Ring, the Austrian young gun secured two podiums, thus reducing the gap to the leaders, Ocon and Verstappen. While Esteban Ocon encountered a race weekend to forget, in Styria. For the first time this year, he had to leave a race venue empty-handed. Max Verstappen also failed to shine and had to settle for adding just 27 points to his tally while Tom Blomqvist delivered in great style: the Briton won a race and finished runner-up in the other two to pass Auer in the overall standings for third position. Blomqvist’s entire team, Jagonya Ayam with Carlin, was extremely competitive in Spielberg. His team-mate, Antonio Giovinazzi, secured two poles and in race three, the Italian celebrated his first FIA Formula 3 European Championship race win.

Thanks to this success and the 61 points scored by Blomqvist with his three podiums, Jagonya Ayam with Carlin now holds second position in the team ranking behind Prema Powerteam. Right behind the Britons, kfzteile24 Mücke Motorsport follows in third position. With its three drivers Lucas Auer, Felix Rosenqvist and Roy Nissany, the Berlin based squad’s gap to Jagonya Ayam with Carlin amounts to just 22 points.

Antonio Giovinazzi was the seventh driver to have won a FIA Formula 3 European Championship race, this year. 26 drivers succeeded in scoring points, among them Tatiana Calderón (Jo Zeller Racing), the only girl racer on the competitive grid. The Colombian who secured four top-10 results, to date, secured her best result in the season so far by finishing fifth at Spa-Francorchamps. She is determined to continue her upswing and keep on adding points to her tally, in the Eifel.

Tatiana Calderón (Jo Zeller Racing): “I’m really happy with my season so far. I had a difficult start as I joined Jo Zeller Racing really late but from Spa-Francorchamps, things ran really well for me. I scored my first FIA Formula 3 European Championship points at the Belgian circuit and afterwards, I succeeded in demonstrating that this success wasn’t a nine-day wonder. I’m delighted with having secured my best grid positions in regular conditions, at the Red Bull Ring, by qualifying 12th twice. I hope that I will be able to also score points at the Nürburgring as it is one of my favourite circuits. Last year, in the British F3 Championship, I even made it to the podium, there. I hope to be able to repeat this feat, this weekend – but to do so in a series as competitive as the FIA Formula 3 European Championship, everything must run absolutely perfectly.”