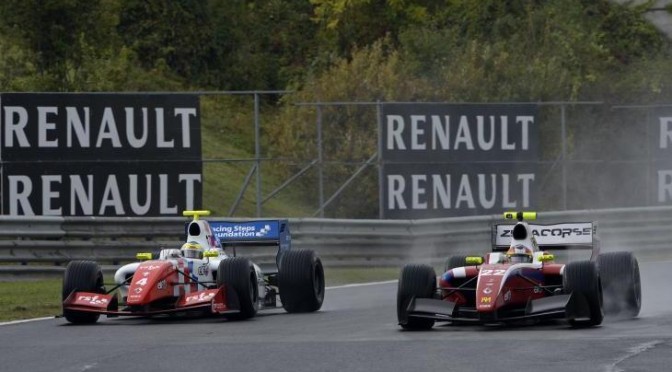 ROBERTO MERHI TAMES THE ELEMENTS AT THE HUNGARORING

Following his successes at the Moscow Raceway and the Nürburgring before the summer break, Roberto Merhi (Zeta Corse) continued his strong form in the Formula Renault 3.5 Series. With a fantastic start from seventh place on the grid, the Spaniard soon took control of the race to score his third triumph of the season. Second place, Pierre Gasly (Arden Motorsport) overtook pole man Oliver Rowland (Fortec Motorsports) in the final corner of the race. Eight days after his maiden Formula 1 test with the Caterham F1 Team, Roberto Merhi is now just 26 points adrift of his compatriot Carlos Sainz (DAMS), who finished fourth on Saturday.

This morning, Oliver Rowland took his second pole position of the year with a lap of 1:30.203 ahead of the French trio of Pierre Gasly, Norman Nato (DAMS) and Matthieu Vaxiviere (Lotus). Will Stevens (Strakka Racing) completed the top five, while championship leader, Carlos Sainz had to settle for 14th position.

A shower before the start of the race soaked the track surface. When the lights went out, Oliver Rowland held on to the lead ahead of Roberto Merhi who put in a splendid start from seventh place on the grid. Pierre Gasly, Will Stevens and Matthieu Vaxiviere followed at the end of the opening lap while Carlos Sainz was already up to sixth place.

Oliver Rowland and Roberto Merhi quickly pulled away from the rest of the field. Meanwhile, Carlos Sainz continued his march forward, passing Matthieu Vaxiviere and Will Stevens. After several unsuccessful attempts, Roberto Merhi moved into the lead on lap seven when Oliver Rowland went a bit wide at the first corner.

Now in lead, the Zeta Corse driver pulled away and went on for the win with a 29-second margin of victory from Pierre Gasly, who passed Oliver Rowland in the last corner of the final lap. Carlos Sainz finished fourth ahead of Matthieu Vaxiviere, Will Stevens, Marco Sørensen (Tech 1 Racing) and Norman Nato. FIA F3 European Championship leader, Esteban Ocon (Comtec Racing) claimed ninth place in his first race in the Formula Renault 3.5 Series while Jazeman Jaafar (ISR) was the final driver in the points.

Roberto Merhi: “We were not able to run to our potential in qualifying due to a red flag. Happily, we made up for that at the start. There was a lot of water spray behind Oliver and I wasn’t able to see. He then made a small mistake that allowed me to get by. Afterwards, I was able to pull away while taking care of my tyres because this track is very demanding when it comes to tyre wear, especially in drying conditions. “

Pierre Gasly: “The opening laps were very tough. I just tried to stay on the track because the grip was really low. We all had different strategies in terms of tyre pressure today. When Carlos caught me, I had to defend my position, and then the car became better in the drying conditions. I was able to pick up the pace and I saw Oliver in the final laps and I gave it everything I had!”

Oliver Rowland: “Right from the opening laps of the race we struggled with the traction. Roberto caught up to me very quickly and I could only defend my position for a few laps. We must remember the positive things today: a pole position in the dry, which is a good step forward. I hope the conditions tomorrow will allow us be in front of them.”