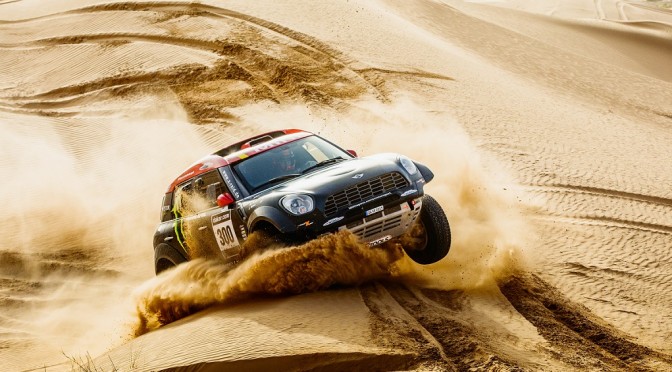 WALKNER ON A CHARGE AND TERRANOVA DOES IT AGAIN!

Being a debutant does not necessarily mean being slow. In any case, KTM Matthias Walkner gave a fine demonstration of speed to pick up his first stage victory on the Dakar, whilst in the car category Orlando Terranova enjoyed his second success in two days.

After finishing eighth on his very first special on the Dakar, then 6th on the longest special of this year’s edition between Villa Carlos Paz and San Juan, Matthias Walkner decided to take the quickest route to his first stage victory on the Dakar. The Austrian three times MX1-MX3 world champion was in the leading trio at CP2 before going into overdrive, leaving the discipline’s specialists in his wake and writing the first entry on his roll of honour for the King of all rallies at the finish in Chilecito. This performance puts him definitively among the riders to keep an eye on, whilst Marc Coma is being closely watched by all his rivals. After losing more than ten minutes the previous day, the title holder staged a comeback, finishing only 40 seconds behind Walkner.

More importantly, he gained one minute back on Joan Barreda who did not tempt fate and instead made sure of a solid third place to consolidate his leadership in the general standings. Toby Price finished fourth on the stage, to confirm the rookies’ good form, ahead of Barreda’s nearest rival in the general standings, Paulo Goncalves. Alain Duclos put in a fine performance at the end of the stage to put his Sherco in sixth place, whilst the rest of the French contingent is struggling, with in particular the 16th and 21st places of the Yamahas ridden by Michael Metge and Olivier Pain. Laia Sanz, the leading lady, enjoyed a noteworthy performance, finishing 17th on the day’s stage.

A regular occupier of the places of honour, today Lucas Bonetto accomplished his finest stage on a quad, having started in fifteenth position this morning. The Argentinean won in front of his home crowd thanks to a dazzling end to the special, after having trailed Sebastian Halpern at CP2 by three minutes, before beating him by 58 seconds at the finishing line. 2’14 behind the winner, Rafal Sonik took advantage of the mishaps suffered by Ignacio Casale to open up a lead in the general standings.

After crashing at the end of the special on Monday, Orlando Terranova had no intention of leaving his team-mate Nasser Al-Attiyah to effortlessly lead the rally. The Argentinean, who has good knowledge of the tracks in his region, produced a sterling effort in the second part of the special after having reached CP1 with a similar time to Giniel de Villiers and Al-Attiyah. In the end, he clawed back almost two minutes on the Toyota driver and more than four minutes on the Qatari general standings leader. This battle was joined by Alrajhi Yazeed who is taking part in his first Dakar and who now occupies a very impressive fifth place in the general standings.

As for the Peugeot team, Carlos Sainz seems to be getting the hang of the new car and improving in performance terms with the day’s fourth place, four minutes behind the day’s winner, even if the Spaniard is still far from being in an ideal position to battle for victory in Buenos Aires, trailing Al-Attiyah by almost 20 minutes in the general standings. Stéphane Peterhansel is also climbing back up the standings even if the Frenchman did lose almost ten minutes to Terranova today, whilst his former team-mate Nani Roma finally put his mishaps behind him with sixth place this Tuesday evening in Chilecito. Third in the general standings this morning, Bernhard Ten Brinke lost 30 minutes and drops down to 8th place.

6th on the first stage and then 3rd on the second, Airat Mardeev has continued his progression with a first stage victory on the Dakar 2015, enabling him to take the lead in the general standings. The Kamaz driver managed to open up a gap of almost two minutes over a second Kamaz driven by Andrey Karginov, the winner in 2014, and a gap of 4’30 over the ever consistent Gerard de Rooy. In the general standings, Mardeev now boasts a lead of eight minutes over his main rivals.