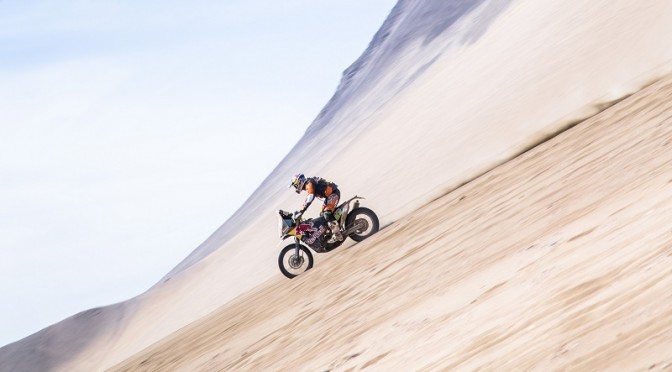 The weather had a decisive say on the eighth day of bike racing at this latest edition of the Dakar. Consecutive days of torrential rainfall on the Salar de Uyuni (the giant salt flat at the heart of today’s route) led to a shortened stage and mechanical problems for a host of bikers. When the final times were posted after two marathon days the results gave a major shake up to the leaderboard.

It was a tough day for Jordi Viladoms, last year’s runner-up who is out of the race due a broken engine sustained while racing through the metre deep pools of water that littered the route in Bolivia. Meanwhile, Matthias Walkner and Hélder Rodrigues joined Barreda among the large group of late arrivals in Iquique after suffering in the wet conditions. It will be a long night for the factory team mechanics and the road ahead looks even tougher for the remaining amateur riders after the salt water on the stage ravaged all engines.

While the bikes and quads completed their marathon stage, the truck and car competitors stayed off the accelerator during a rest day in Iquique. Despite Kamaz Master occupying the top three positions in the general truck classification there was no member of the Russian team putting their feet up today. As well as being a long day for the mechanics, each driver and their race crews were also busy working on the trucks. Seven-time Dakar winner and Kamaz team leader Vladimir Chagin was ever present in the bivouac to oversee the rest day operation.

It’s been a very satisfactory first week for car race leader Nasser Al-Attiyah and the Qatari was in a relaxed mood as he gave interviews to the world’s media from the bivouac in Iquique. Also being asked plenty of questions was 2015 Red Bull Frozen Rush champion and three-time Baja 500 winner Bryce Menzies as he got his first up-close look at the world’s toughest race. The American off-road racer made no secret of the fact that it’s his dream to one day race the Dakar Rally.