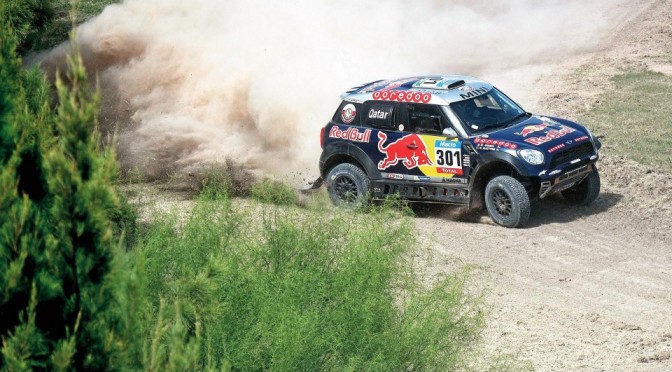 All four categories of the Dakar Rally were reunited today as they shared the sandy path between Iquique and Calama.

The cars battled across the dunes of the Atacama Desert with race leader Nasser Al-Attiyah straight on the attack as the sand racing specialist increased his overall lead to 24 minutes. Sitting second overall in the car race for the eighth consecutive stage is South Africa’s Giniel de Villiers and the Toyota driver will continue to push Nasser despite forfeiting 15 minutes to the Qatari today.

There was a terrific fightback in the bike race from many of the riders who lost time due to the horrendous mixture of water and salt that caused a raft of mechanical problems yesterday. Hélder Rodrigues picked up the stage win and his Honda team-mate Joan Barreda was 10th despite incurring a 15 minute penalty for an engine change. Matthias Walkner also proved he still has plenty of racing in him on his Dakar debut as he clocked a top 20 time on today’s stage, even with a 55 minute penalty for missing a waypoint added to his time.

Out at the front of the bike race is four-time winner and reigning champion Marc Coma. The Red Bull KTM Factory Team captain is refusing to take anything for granted with second placed Paulo Gonçalves less than six minutes behind in the overall rankings.

The rest day had clearly been a successful exercise for Kamaz Master as Ayrat Mardeev claimed another stage win. Race leader Mardeev was followed home by his team-mate and overall second place trucker Eduard Nikolaev. 14 minutes is all that separates the two Russians as the contest promises a dramatic final four stages of racing.

All competitors reaching the finish line of stage nine were welcomed into a dusty bivouac in Calama with the promise of another early start tomorrow. The Dakar convoy will cross over the Andes on Wednesday morning and enter Argentina for the decisive stages.