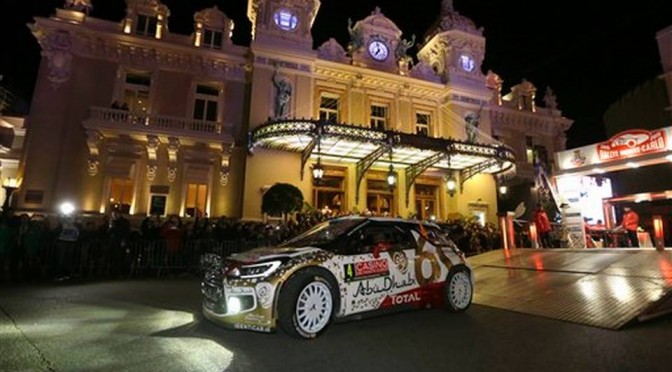 LOEB CONTINUES TO LIVEN UP MONTE-CARLO

Yesterday’s brief warm-up was today succeeded by a real leg, featuring six stages held on roads around Gap. With sub-zero temperatures in the morning, most of the WRC crews opted to go with studded tyres for the first loop. Different options were taken after the midday service. Mads Østberg and Sébastien Loeb took advantage of this to fit snow tyres, without studs, in the afternoon, unlike most of their rivals.

On La Salle en Beaumont – Corps (SS3 and SS6), Sébastien Loeb was simply unbeatable. First thing in the morning and at the start of the afternoon, the Citroën Total Abu Dhabi World Rally Team driver was quickest on both runs on the stage.

However, on the next two tests, the mud dragged onto the road as the crews came through the stages left the surface too slippery for Loeb, who was fourteenth in the running order. And although he managed to hold off his rivals in the morning, Sébastien Loeb hit a rock on SS8 and was unable to finish the leg.

Despite becoming increasingly competitive throughout the leg, Kris Meeke didn’t make it to the end of SS8. He damaged his car’s rear left-hand suspension after sliding into a ditch, whilst running in fourth position.

Thanks to making a good call of tyres choice for the second loop, Mads Østberg ended the day with a third fastest time. He moved up to fifth place in the overall standings.

In the WRC 2 category, Stéphane Lefebvre held onto first position in a DS 3 R5. In the FIA Junior WRC, Quentin Gilbert remained in front, ahead of Ole Christian Veiby and Terry Folb in their DS 3 R3-MAXs.

Tomorrow’s leg will take the crews from Gap to Monaco. The actions starts at 8.10am with two stages, including the 51.70 kilometre monster of Lardier et Vaneca – Faye, with the midday service at 12.34pm. The crews then head towards Monaco, taking in Pruniers – Embrun and Sisteron – Thoard. The cars will be driven into Parc Ferme in the Principality from 6.58pm onwards