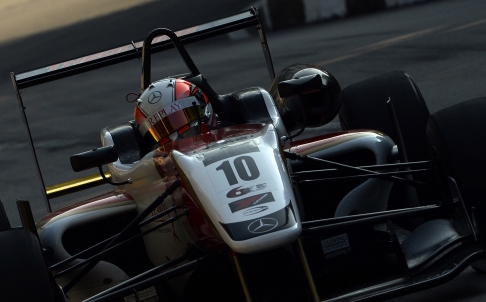 WILLIAMS MARTINI RACING is pleased to announce that British racing driver Alex Lynn will be joining the team as Development Driver for the 2015 Formula One World Championship season.
In this role Alex will become fully immersed in the race team and gain a full understanding of its various functions. As Development Driver his primary role will be using the team’s simulation tools to help with the ongoing development of the Williams Mercedes FW37 and assisting the race engineers in setting up the car for each Grand Prix. Alex will also get behind the wheel of the FW37 for one day’s testing in Barcelona following this season’s Spanish Grand Prix in May.
Aged 21 and born in Essex, Alex began his single-seater career in Formula Renault UK, dominating the 2011 championship with a record 12 wins from 20 race starts. He was subsequently named British Club Driver of the Year at the 2011 Autosport Awards. Alex moved up to British F3 the following year and finished fourth before progressing to the prestigious FIA European F3 Championship in 2013 where he claimed third in the standings as the highest placed rookie. Alex ended the season with a dominant victory in the coveted Macau F3 Grand Prix. In 2014, Alex wrapped up the GP3 title with a record points margin, also becoming the first Englishman to claim this title. As well as his Development Driver duties for WILLIAMS MARTINI RACING in 2015, Alex will also be competing in GP2 for the Championship winning DAMS racing team.
Claire Williams, Deputy Team Principal and Commercial Director of Williams, said; “Williams has a strong track record in bringing young talent though the ranks and our Development Driver position is designed to fully immerse new recruits into the inner workings of a Formula One team. As a British team we are always on the lookout for emerging home-grown talent and Alex has caught our eye with his impressive performances in GP3. He has been chosen on merit and we are confident that alongside Felipe, Valtteri and Susie, Alex will help play an important role in making sure that the FW37 shows continuous improvement over the course of the 2015 season.”
Speaking about his appointment, Alex Lynn, added: “I am extremely excited to be joining Williams, a team with such incredible history and amazing potential. Over the past year the team has made huge strides forward and it’s clear to see their determination to fight for more success in the future. I hope that with a strong year in GP2, while also helping to develop the F1 car throughout this season, I can follow in the footsteps of Valtteri Bottas who joined the Williams team in exactly the same Development Driver role. Through hard work and determination, he has gone from winning the GP3 title to earning his place as a Williams F1 race driver. Working with people like Sir Frank Williams and Pat Symonds is an incredible opportunity for me. There is so much experience here at Williams and I hope to be able to use the knowledge gained from these people to further develop my skills as a racing driver and respected member of this team. Everyone has been incredibly welcoming from the outset, we have hit the ground running and I am very excited about the challenges this role offers – particularly my on track activities driving the FW37 in a few months time.”
F1Weekly Podcast # 826