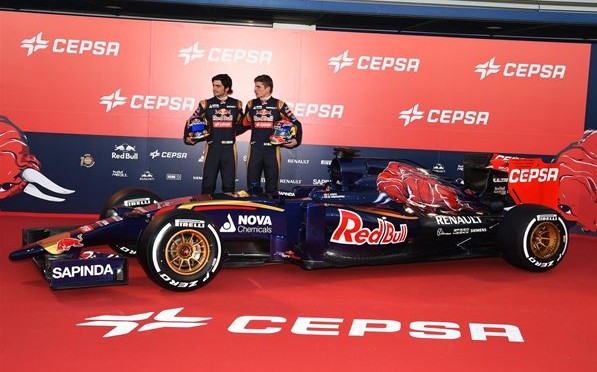 Toro Rosso launched its 2015 STR10 in the Jerez pit-lane.

The STR10 was revealed today at the Jerez de la Frontera circuit in southern Spain. As the car’s codename implies, 2015 will be Scuderia Toro Rosso’s tenth year in Formula 1 and CEPSA, who hosted today’s launch, has sponsored the team for the past 4 years.

The drivers Max Verstappen and Carlos Sainz whipped the sheets off Scuderia Toro Rosso’s challenger for the 2015 Formula 1 World Championship in the Jerez pit lane, the day before the serious business of testing gets underway with four days of track action.

The STR10 has been produced under the technical directorship of James Key, Chief Designers Paolo Marabini (Chief Designer – Composites & Structures) and Matteo Piraccini (Chief Designer – Mechanical & Systems.) Built by the team in Faenza, Italy, it owes its shape to the efforts of our Wind Tunnel staff in Bicester, UK.

Carlos Sainz, will have the honour of being the first to drive the new car tomorrow, here in his native Spain. Our other rookie Max Verstappen will drive on Monday and Wednesday, with Sainz back in on the Tuesday.