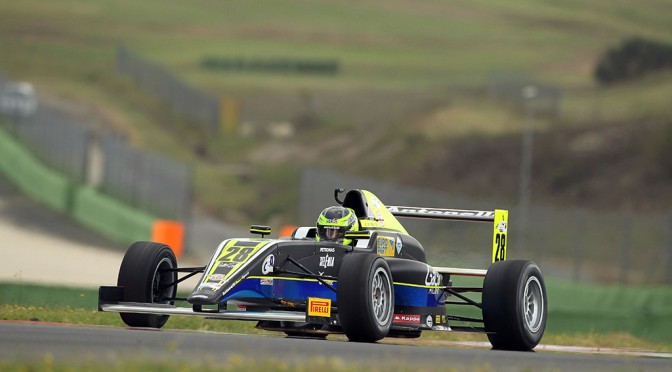 The new season of Joao Vieira is ready to really getting going on Saturday 14th and Sunday 15th of February. On “Piero Taruffi” the Capitoline track in Vallelunga, the young Brazilian driver, whose career is managed by Minardi Management of Giovanni Minardi, will come back at the wheel of Antonelli Motorsport’s Tatuus F.4, to take part in the first two-days of pre-season test.
After his debut last season in the Italian F.4 Championship powered by Abarth, Joao will continue working with the team of Marco Antonelli, taking advantage of the gained know-how, aiming for the tricolored title. The challenging circuit of Campagnano will inaugurate the first (of seven) round of the 2015 Championship. Subsequently, F.4 Circus will travel to Monza, Franciacorta, Mugello, Adria, Imola and Misano for the grand finale. Last year, along the 4,085 meters of the circuit, Joao stood out with amazing battles, resulting consistently among the fastest drivers and closing the three races with points.
“I’m really happy to be back behind the wheel, after four months from Adria race. Weather forecast rain and this will allow me to become familiar with the circuit in these conditions, working on the set-up. Last year I had to get to know all quickly: team, car and tracks. This year, instead, I will have the opportunity to make the most of all the work done in one year. The goal is to start immediately determined from the first race in Monza”, Joao Vieira says, ready to go to Vallelunga.
“I am glad the engines finally switch on. After the positive experience of 2014, I am sure that this year will be a successful for Joao and he can fight for the Championship win“, the manager Giovanni Minardi comments.