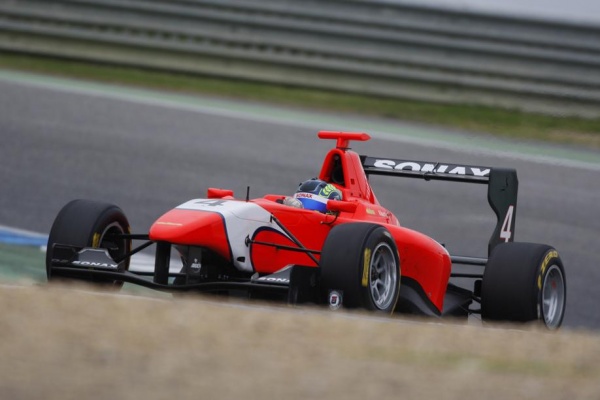 The opening 2015 GP3 pre-season test session gets underway at the Circuito Estoril on the 18-19 March for a two day test. This is the first of three pre-season tests before Barcelona hosts round one of the year in early May.
As ever with a new season, we welcome new rookies into the fold along with a blend of more experienced drivers with the common goal the same – to claim the title.
Reigning Team Champions’ Carlin have a brand new line-up starting with Ferrari Academy Driver Antonio Fuoco, the Italian finished fifth in the European F3 Championship in 2014. Australian Mitch Gilbert who raced in four GP3 events last season has also signed with Carlin, whilst GP3 race winner Jann Mardenborough will test for the British squad this week.
ART Grand Prix retain German Marvin Kirchhöfer who finished an impressive third overall in his debut season in the category. He will be joined by Alfonso Celis Jr and the highly rated rookie, Esteban Ocon. The French star won the European F3 Championship last year as well as combining his duties as Lotus F1 Team Test Driver.
There are all new faces at Status Grand Prix – the experienced Alex Fontana has joined the green and black squad. Welshman Seb Morris who finished third in Formula Renault 2.0 NEC and Thai debutant Sandy Stuvik (Euro Formula Open) completes the team.
Multiple race winner Jimmy Eriksson has stayed with Finnish outfit Koiranen GP with Adderly Fong making the move from Jenzer Motorsport to join the Swede. Rookie Matthew Parry from Formula Renault 2.0 Euro Cup joins the experienced duo.
Kevin Ceccon has switched to Arden International with 2014 race winner Emil Bernstorff partnering the Italian. Polish rookie Aleksander Bosak from FR 2.0 ALSP finalises the squad.
Jenzer Motorsport have retained two of their 2014 drivers with Matheo Tuscher and Pal Varhaug, with Swiss rookie Ralph Boschung (ADAC Formula Masters) joining the team. The car has an exciting new livery so keep your eyes peeled!
Newcomers to the GP3 field are Spanish squad, Campos Racing. The Valencia based outfit have experience in our sister series GP2 and will be keen to add success in this category too. They have signed two drivers to date with Spaniard Alex Palou (Euro Formula Open) and Kuwaiti Zaid Ashkanani (Porsche GT3 Cup – Middle East).
Italian Luca Ghiotto has remained with Trident alongside two rookies: Artur Janosz from Poland who has raced in Euro Formula Open and Oscar Tunjo from Colombia from the 3.5 Series.
There will be eight teams participating in the 2015 GP3 Series season.
GP3 Series CEO Bruno Michel commented: “In spite of the numerous requests from teams to join the GP3 field and from drivers who wish to race in our Series, we were unable to give a new entry for this season in order to replace Marussia Manor Racing as their cars remain in administration.
“I could not ask for a new team to buy three brand new GP3/13 cars when we will introduce a new machine next year. Therefore, there will only be eight teams competing in the 2015 GP3 Series season. However, we will of course give an entry to nine squads for the next three-year cycle which will start in 2016 in order to meet the demand of both teams and drivers.
“Looking at this season’s line up, I am very impressed by its level. It is one of the strongest we have had in GP3 and I cannot wait to see who will come out on top.”
Entry List: Estoril GP3 pre-season test
F1Weekly podcast # 815