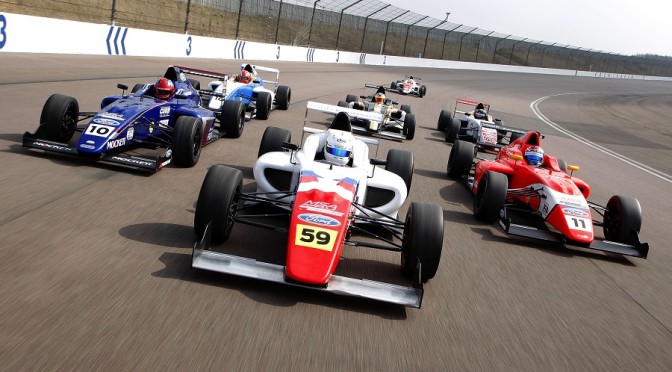 30 March, 2015 – A new chapter in Ford’s 48-year history at the forefront of junior single-seater motor racing will open this weekend (4/5 April) at Brands Hatch with the launch of MSA Formula. A natural evolution from the highly successful Ford-backed Formula Ford Championship of Great Britain, MSA Formula has attracted young drivers from around the globe to compete in Britain’s FIA-accredited Formula 4 championship.

Pilots from Brazil, India, Romania and the United States will join their British counterparts to compete in technologically advanced carbon fibre chassis powered by Ford’s 1.6-litre EcoBoost engine. In so doing they are putting their feet firmly on the first rung of the FIA’s new single-seater career ladder, designed to prepare them for international racing careers up to and including F1.

Competitors hoping to follow in the wheeltracks of past Formula Ford champions will find MSA Formula a real career-booster – the winning driver will hold the title FIA Formula 4 Champion of Great Britain and will earn 10 Grand Prix Superlicence points. In conjunction with Hankook, the champion will also receive a test with a leading FIA F3 team, while Ford is funding a £30,000 prize purse.

Ironically the youngest driver – at 15 years and five days old – is one of the most experienced in terms of car racing. He is Californian Colton Herta, son of IndyCar race winner Bryan, who won the Pacific F1600 Championship when he was all of 13. Herta and Norris make up two-thirds of the crack Carlin team; their running mate is impressive 16-year-old Romanian Petru Florescu.

Joining TRS Arden team-mates Mitchell and Ahmed is a driver familiar with single-seater success at Brands Hatch: 18-year-old Ricky Collard, son of BTCC driver Rob, who was twice a Brands Hatch podium finisher last year in Formula Ford. Collard is probably, alongside JHR Developments driver Sennan Fielding, the most experienced in the field.

Nick Tandy’s JTR team won the Formula Ford championship the last three seasons and has two top kart stars on its roster for MSA Formula in the form of Dan Baybutt andJames Pull, both of whom have shone in pre-season testing. They will be joined from the Donington Park rounds onwards by young Indian rookie Ameya Vaidyanathan.

The real star of the pre-season has been Ticktum, who topped the times for the Fortec team at the Snetterton, Silverstone and Rockingham test days. Racing Steps Foundation-backed pilot Smith is Ticktum’s Fortec running mate.

Another team synonymous with Formula 3 can be expected to make a big impact: Double R Racing will field cars for exciting teenage Brazilians Matheus Leist andGustavo Myasava, and Indian MRF Formula 1600 Champion Tarun Reddy. Another rapid young Brazilian, Rafael Martins, will be at the wheel of one of the SWB Motorsport MSA Formula machines, alongside promising Jerseyman Jack Butel.