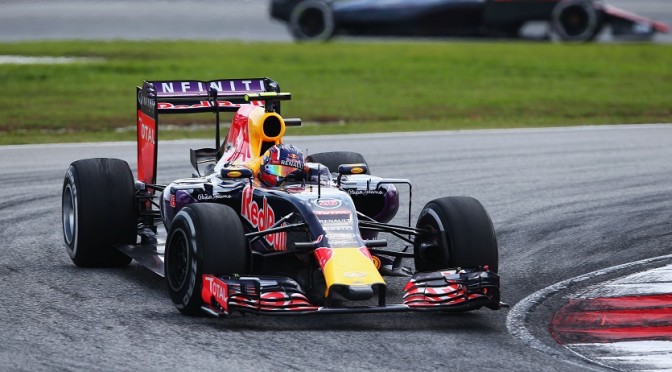 Clark and Nasir share their joy in Sebastian Vettel’s victory over Mercedes in Malaysia! We have Motorsports Mondial with the Guru and 50 words from the F1W forum on the Malaysian Grand Prix and… Here are some post GP race driver interviews…

Romain Grosjean: “Overall we had quite a good race with a strong first lap and some nice overtaking, although I lost a lot of time behind Hulkenberg and then the spin with Perez in such a fast corner. I had some fun overtaking with Red Bull, Toro Rosso and Force India, which was great, and we had a good strategy but we lost too much time to benefit from it. I also had an issue with my drinks bottle which added to the fun. Overall the car behaved well though and we’re not far from the top ten so we’ll work to close the gap for China.”

Valtteri Bottas: It was a nice race in the end. I was always in the wrong place at the start and lost a lot of time and positions. I made the most of the performance of the car and it was great to be able to race Felipe at the end. We know we have some work to do, we need to learn from our mistakes and keep progressing. We have some upgrades that are due shortly which will hopefully be a further step in the right direction.
Felipe Massa: I don’t think we had a fantastic day today. We had a small problem in the pitstop which lost a little time. Valtteri was able to catch me in the final few laps, but it was good to race wheel-to-wheel. We have got the best points we could for the team given the where the car is at the moment.
DANIIL KVYAT: “We took the maximum out of the situation today. We are lacking some pace and need to catch up, I am confident that the team can do it; it’s a challenge and we have to face it with a strong mind. Fighting for P9 and P10 is not what we want, we struggled today and we need to work out why.”
DANIEL RICCIARDO: “A really frustrating race. I was ready for a fight going into the race and hoping for something special – but it wasn’t to be! I had a bit of contact on the first lap, which hurt us and then we had a few issues throughout the race, which we had to manage. It took a long time to pass cars as we didn’t have the pace and we had some problems with the brakes, which didn’t make our afternoon easy. It was a good job by Seb, a great drive from him.”
[audio:http://www.podtrac.com/pts/redirect.mp3/mp3.f1weekly.com/podcasts/03-31-15f1weekly675.mp3]