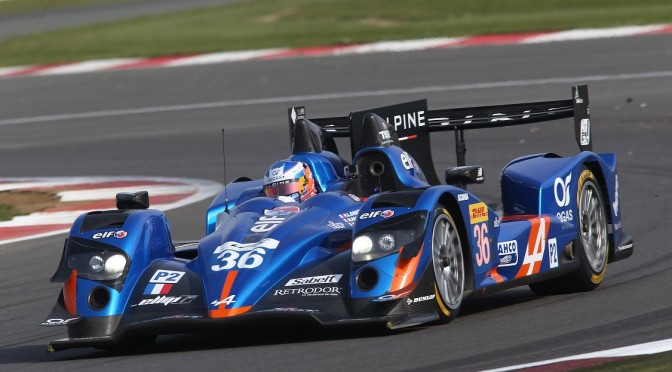 Alpine on the road to Le Mans once more…

Since its return to active competition in 2013, Alpine has clinched back-to-back crowns in the European Le Mans Series. Meanwhile, Signatech-Alpine made it right the way to the chequered flag at Le Mans in both 2013 and 2014, claiming an excellent podium finish in the LMP2 class last year and a remarkable seventh position overall.

In 2015, Alpine continues to compete at the very pinnacle of international sportscar racing, fielding its A450b in the FIA World Endurance Championship (WEC).

After rounds so far at Silverstone and Spa-Francorchamps, Nelson Panciatici, Paul-Loup Chatin and Vincent Capillaire will return to Le Mans on Sunday, May 31 for the vital first phase of the official pre-event build-up.

Over the course of the day, they will all have the opportunity to test the Alpine A450b around this temporary circuit, by way of preparation for qualifying on June 10-11 and the 83rd edition of the legendary Le Mans 24 Hours itself on June 13-14.

Bernard Ollivier, Alpine Director:“With the calibre of the field at Le Mans this year, it will be a tall order to replicate the seventh place we achieved outright 12 months ago, but the objective is to repeat our LMP2 class podium – if not better. Whilst the situation might be slightly different this time around, the team has real in-depth strength and big ambitions. Our drivers are very familiar with both the Alpine A450b and the Le Mans 24 Hours, and the team has shown it has the potential on many occasions. Ultimately, the cream will rise to the top, and our team has consistently proven that it possesses motivation and determination in spades!”

Philippe Sinault, Signatech-Alpine Team Manager: “Our entire season is geared around preparing for this prestigious event. The Alpine A450b will benefit from a special aerodynamic package for Le Mans, boasting a number of improvements over last year – when it was already very competitive here in the LMP2 class. We have an excellent driver line-up, all of whom have prior experience of the Le Mans 24 Hours, and the Test Day will enable us to reacclimatise to the track and establish a sound basic set-up. You must always expect the unexpected at Le Mans; all the teams are capable of formulating the optimum strategy, but if you really want to prevail in this race, you must be adept at anticipating and reacting unforeseen situations as they arise.”

Nelson Panciatici:“We will be able to draw upon the experience that we all have with the Alpine A450b, which is a real advantage when it comes to tackling a race like the Le Mans 24 Hours. We already have a good baseline set-up for the car and a good understanding of the tyres, but the Test Day will serve as an important form guide and an indicator as to where we stand in relation to our rivals. The new aero package will give us a performance boost around this unique circuit. In the race, if we can be as competitive as we were last year, there’s no reason why we shouldn’t do battle for the podium again and even the LM P2 class victory.”

Paul-Loup Chatin:“I really can’t wait to get started! Beginning with the Test Day, we will need to really turn up the tempo in order to be completely prepared for the race. This session will allow us to assess the different set-up options we have for the car and tyres. It looks like being a tougher fight than in 2014, but whilst we are aware that we still have work to do to improve the performance of the car, our experience and knowledge of the Alpine A450b will unquestionably play in our favour. We intend to leave absolutely no stone unturned in our efforts to conquer the most demanding and rewarding race in the world!”

Vincent Capillaire:“This is the greatest race in the world simply because it is the hardest race in the world! For me in particular, the Le Mans 24 Hours holds a special significance. Like many people from Le Mans, I was born barely 300 metres from the Tertre Rouge turn. I still live in Le Mans and I work at the circuit. Last year, I made my debut in the race and achieved a great result first time out. Now, I want to make the most of that experience to do even better in 2015. We’ve got a very strong team, a reliable Alpine A450b that we know inside-out and a well-matched driver line-up. All of that should give us an excellent chance of success.”