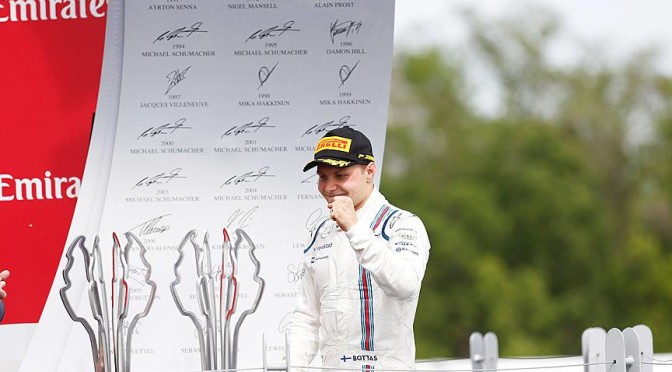 Rob Smedley, Head of Performance Engineering: The message I gave to the team this morning was that we have to go into this race believing in ourselves and be on the top of our game. If we did that I believed we could get on the podium with Valtteri and get a lot of points with Felipe, and that’s exactly what we’ve done. The two drivers were absolutely fantastic all race. The team has worked well as a unit and the strategies were spot on. The rewards are there when you get it right and we need to use this as a good boost to keep moving forwards. We now have races ahead of us where we should be aiming for more podiums.
Valtteri Bottas: We really maximised everything today and I’m really happy for us as a team. We had an opportunity to get third and we took it. We had the chance to change the strategy in the middle of the race and go for one stop instead of two. We knew it could be a risk but the team knew what to do and we were right. There was not much threat from behind so we could take a bit of a risk, and I’m really proud that we did. We were racing hard today and we earned the podium. It’s great to be back in the top three and we know there are better Grands Prix to come because of the updates we are bringing so I can’t wait for the next few races.
Felipe Massa: After a challenging qualifying for me yesterday I’m happy with how the race has gone and I’ve picked up some good points. Starting P15 was always going to lead to a busy race and there was a lot of great overtaking and the car had good consistent pace. We managed to have a one stop race and still keep the pace with the option tyre at the end which was fantastic. With the car I had today I could have been fighting for podiums, but all in all this has been a very positive weekend for the team and we should be very competitive in the next few races, especially with some upgrades planned for the car.
F1Weekly Podcast # 825