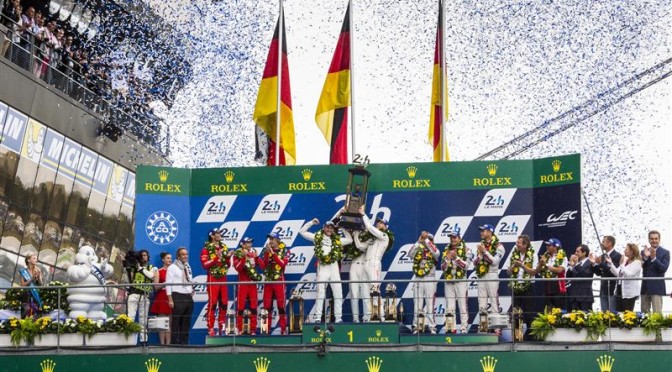 The 2015 edition of the 24 Hours of Le Mans was a “great race” according to one man who should know: Tom Kristensen, the nine-time record winner and Rolex Testimonee. Mr Le Mans himself. The overall winners at the 83rd running of the race were without question the best in the field, the other class winners also deserving of praise. Luck may play a part in the race; this year’s victors could claim fairly to have earned any that came their way following exceptional performances in overcoming the stresses, strains and competition at the world’s oldest and most renowned endurance motorsport race.

This year’s contest was touted as an exceptional prospect with four major automotive manufacturers represented by eleven of the impressive fourteen strong LM P1 class. Organizers of the race, since founding it in 1923, the Automobile Club de l‘Ouest (ACO) have always placed great store by the fact that the race is a breeding ground for innovation in the automobile industry. The current regulations, introduced in 2014, place great emphasis on fuel efficiency and in the top category encourage the development of advanced hybrid technology to recover and reuse energy generated by the car during racing.

The LM P1 Hybrids receive a set allocation of energy per lap based on their chosen engine/ERS (energy recovery system) combination. Teams can make the choice between big engine/small hybrid system or small engine/ large hybrid assistance. For those teams that raced the 24 Hours of Le Mans last year, 2015 would be about evolution rather than revolution in terms of development.

Porsche returned to the LM P1 echelon in 2014. Although quick neither of its cars finished the race, both sidelined with reliability problems. The team made some bold decisions according to its principal Andreas Seidl: “Our objective for this year is to finish on the podium. We have added a third car, which was a big step since it is a lot more than just adding more people to the team but it gives us increased chances to do well at Le Mans.”  Every element of the car design was looked at over the winter, and a big change was made to the ERS: “The way the regulations are designed there is an incentive to go in the highest hybrid class. It was pretty clear for our concept that an 8 megajoule system was the way to go.” Early season results suggested it was a good decision: a blisteringly fast car and podium finishes were achieved if not the highest step.

For Audi, winners here last year, improvements were needed to keep ahead of their rivals and results – two wins from two races – in the World Endurance Championship (WEC) indicated the cars might not be as quick as Porsche but could depend upon the highest level of reliability in mechanical and human terms. Unlike Porsche, without a win at this level of endurance motorsport for 16 years, Audi has won 13 of the last 15 races at Le Mans.

Toyota arrived at the temple of sportscar racing on the back of winning the 2014 WEC with spirits low. Their rivals appeared to have progressed further in their close-season developments. The team was putting a brave spin on their situation, as explained by Pascal Vasselon, team Technical Director: “We have made a big step in performance, something like 3 seconds per lap. It should have been enough to keep the lead. The problem is we are facing opposition that have achieved 4 seconds. We definitely believe we have a chance because at Le Mans reliability dominates performance. If we manage the race well we can do well, but no room for mistakes.”

By contrast to the three others, Nissan were the new boys on the block. Similar to Porsche in 2014, it is a manufacturer with considerable racing experience, simply not at this rarefied level. Cometh the hour, cometh the man. In this case Ben Bowlby, Team Principal, engineering virtuoso and maverick genius: “The wish to come to Le Mans has been alive for a long time. Ours is a ground up project – an engine from scratch, build a chassis, build a team of people taking all sorts of specialists and making them work together to achieve team spirit. We are going up against15 years of detailed knowledge. If we did exactly the same as the others it would take us a long time. By using innovation we are attempting to leapfrog the design cycle. “

And innovative it has been: a front-engine, front-wheel drive design that immediately sets Nissan apart from the rest of its competitors and every other prototype seen at Le Mans in a decade. Innovation comes at a price at a 24 hour race, especially untested, unproven innovation: “This is a very, very tightly defended crown and very hard to win. If you could just come here and win, it would be worthless. It will take us time but we have set ourselves up with the intention to be competing for victory.”

The 24 Hours of Le Mans is not just about the LM P1 Hybrids. 56 cars formed the grid and included a highly competitive group of LM P2 cars, whose regulations promote efficiency and economy one rung down the technology ladder from the top, and is no less closely fought.

The GTE categories – Professional and Amateur – are, according to the ACO rules, open to cars with  “an aptitude for sport with 2 doors, 2 or 2+2 seats, open or closed, which can be used perfectly legally on the open road and available for sale.” The result is a collection of highly desirable gran turismo (grand touring) sports cars from the like of Ferrari, Aston Martin, Porsche, Dodge and Chevrolet.

Slower than the prototypes the racing is no less fierce and the category forms a true link back to the origins of the race, when road going cars would be entered. The Amateur tag is another link to tradition, encouraging gentlemen drivers to participate alongside the professionals.