What a race! Pole-sitter Luca Ghiotto lost the lead at the start but fought back impressively to dominate Race 1 in a safety car affected race. Carlin and Ferrari Academy Driver Antonio Fuoco carved his way through the field in supreme style to achieve his first podium in second position with Mercedes backed Esteban Ocon from ART Grand Prix in third.
Frenchman Ocon made the better start and got the jump on pole-sitter Ghiotto to take the lead. However, there were two stallers on the grid: Alex Palou (Campos Racing) who stalled from P3, but luckily was avoided by the pack. Unfortunately Carlin’s Mitchell Gilbert also stalled and Arden International’s Kevin Ceccon was unable to avoid the Australian and ran into the rear of his car. Samin Gomez also retired attempting to avoid Ceccon’s stricken car but there was nowhere to hide.
The safety car was deployed due to the debris on track and after four laps had passed with the cars having to drive through the pitlane, the safety car came back in with the action resuming. Ocon pulled a small advantage instantly at the re-start but ran wide into turn one. Ghiotto sensed his opportunity to pounce and was glued to the rear of his gearbox. Ocon braked too hard and locked up his tyres with Ghiotto looking ominous in his mirrors. On lap six, Ghiotto passed Ocon for the lead and posted the fastest lap as he set his marker to his rivals.
In third was Marvin Kirchhöfer with Emil Bernstorff and Sandy Stuvik (the Status Grand Prix debutant making an excellent start from P9 to P5) completing the top five. The Thai driver was embroiled in a battle with Bernstorff, the two going wheel to wheel.
Fuoco who started in P8 was on a mission and he certainly provided the large army of fans with plenty of entertainment. First he picked off Ralph Boschung, then Jann Mardenborough, Stuvik and Bernstorff. Kirchhöfer, who was holding onto the final rostrum place, ran wide under pressure from the Italian and Fuoco wasted no time grabbing third from the German.
At this point, Ghiotto had built up a five second lead over Ocon in second with Fuoco on the prowl. The Carlin rookie was soon on Ocon’s tail and had the move done and dusted but with a seven second deficit to race leader Ghiotto, which proved too large to capitalise on.
Bernstorff and Mardenborough were next to find their way through on Kirchhöfer and in the final laps all eyes were on the tussle for the last podium spot with Ocon having to withstand huge pressure from Bernstorff who was on the attack.
At the chequered flag, it was a jubilant Ghiotto who crossed the line first with a mammoth eleven second margin over Fuoco. Ocon just held on to third, with Bernstorff, Mardenborough, Kirchhöfer, Stuvik, Boschung, Oscar Tunjo and Alex Fontana rounding out the top ten.
A perfect day for Ghiotto saw him pocket the four bonus points for pole and the two extra for fastest lap. This puts the Trident driver into the lead of the Drivers’ Standings on 54. Ocon, Kirchhöfer, Bernstorff and Mardenborough are on 44, 35, 33 and 32 respectively.
ART Grand Prix heads the Teams’ Standings on 80m points. Carlin are second on 62, with Trident on 56.
Race 2 will commence at 09.25 local time tomorrow with Jenzer Motorsport’s Boschung starting from reverse pole. 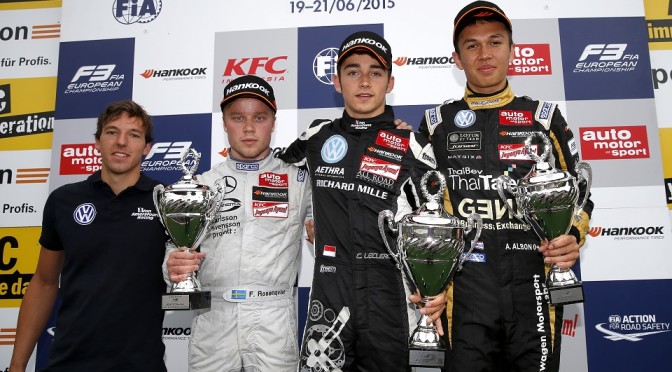 At the start of the race, Antonio Giovinazzi took the lead, but he wasn’t able to pull away from his rivals Felix Rosenqvist, Jake Dennis (Prema Powerteam) and Charles Leclerc. Later on, Dennis dropped back, but Leclerc and especially Rosenqvist kept the leader under pressure. Rosenqvist and Giovinazzi alternated in the lead several times, until the two tangled in a duel. A few metres later, the Italian parked his car with a puncture while the Swede took the escape road and continued. Charles Leclerc took over the lead and brought it home safely, Rosenqvist took the chequered flag in second place.

Third place went to Alexander Albon, so that the driver from Thailand was allowed to take part in an FIA Formula 3 European Championship podium ceremony for the first time. Towards the halfway point of the race, he beat his rivals Jake Dennis and Santino Ferrucci (kfzteile24 Mücke Motorsport) in the battle for fourth and moved up to third following Giovinazzi’s retirement. Ferrucci and Dennis ended up fourth and fifth from George Russell (Carlin), Mikkel Jensen (kfzteile24 Mücke Motorsport), Pietro Fittipaldi (Fortec Motorsports), Fabian Schiller (Team West-Tec F3) and Alessio Lorandi (Van Amersfoort Racing). German driver Schiller, who is living only 150 kilometres away from Spa-Francorchamps, thus scored his first-ever FIA Formula 3 European Championship points.

Charles Leclerc (Van Amersfoort Racing): “I was happy that I made a very good start. Things got a little bit close with Jake Dennis at Eau Rouge, so that I backed off first, only to overtake him soon after that. Then, I didn’t want to take too many risks in the battle for the lead with Antonio and Felix. Somehow, I saw the accident between the two of them coming, because it was really close between them.”

Felix Rosenqvist (Prema Powerteam): “My start wasn’t very good, because I was on the damp part of the track. In the battle with Antonio, there was contact. I was happy that I could continue and still save second place.”

Alexander Albon (Signature): “Being on the FIA Formula 3 European Championship podium for the first time is great, especially as I had an accident in second qualifying yesterday and ended up last. In the opening laps, I drove rather cautiously, because I first wanted to find out where the good places to overtake were. My car was fast throughout the weekend: I reckon we have been able to make another step forward