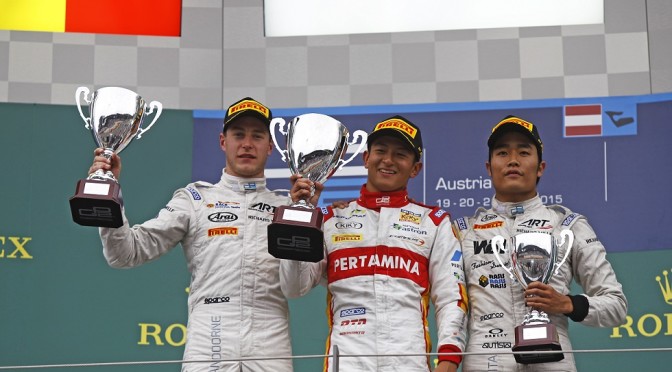 Haryanto holds on for sprint win

Rio Haryanto has claimed his second win of the season in this morning’s sprint race in Spielberg with a drive of skill, speed and cunning to defy series leader Stoffel Vandoorne and Nobuharu Matsushita despite driving with a broken front wing for the second half of the race.
The Indonesian driver started as he meant to go on, making a great getaway as the lights went out to outdrag poleman Nick Yelloly on the inside line into turn one. Alexander Rossi tried to go to the outside but three into one didn’t fit: the American and the Briton collided, Rossi dropped back but continued, but Yelloly’s race was run.
The collision handed second place to Artem Markelov, who had the ART teammates on his rear wing after another yet quick getaway from the McLaren test driver. The Russian was pushing with everything he had for his first win, but Haryanto was equal to the challenge, defending well in the braking areas and pulling away just enough in the fast sections to cover everything off.
On lap 13 Markelov’s frustration spilled over, going late for a gap that was only half there with the Russian throwing himself up the inside as Haryanto braked: the Indonesian saw him at the last minute and opened his car but was unable to avoid him, breaking his right front wing as he tapped the back of Markelov as he ran wide. The Russian ran through the gravel but got going again, and now the Indonesian had Vandoorne on his tail.
The Belgian likewise threw everything he had at his rival, dreaming of a double win for the record books, but equally knew that pressure from behind via Matsushita and Sergey Sirotkin meant that someone was going to miss out on a podium. Haryanto’s top speed wasn’t what it should have been because of the damage, but he was looking to fulfil dreams of his own.
And at the line he had done enough: Haryanto denied Vandoorne, Matsushita and Sirotkin for the win, with just 1.3 seconds covering the four drivers. Mitch Evans had a quiet race for P5, while behind him Pierre Gasly just held off Jordan King for P6, while Alexander Rossi made a last ditch stab at the final point, crossing the line on the same time but just centimetres behind the nose of Markelov.
Vandoorne’s title ambitions were given yet another boost with the win and second place, now leading Rossi by 155 points to 78, while Haryanto closed up to 70 points ahead of Sirotkin on 46, Alex Lynn on 42 and Evans on 35 points, while in the teams’ title race ART Grand Prix are pulling further away on 184 points ahead of Racing Engineering on 96, Campos Racing on 91, DAMS on 62 and Rapax on 58 points as the grid looks ahead to the next round in Silverstone.