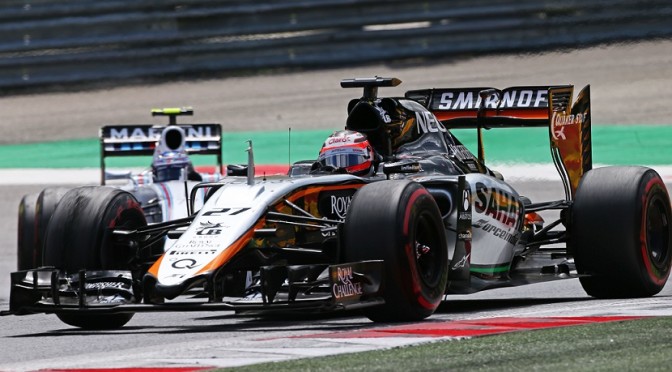 Felipe Massa: I am delighted with the result, the team did a great job and it was a fantastic race. We made the most of the slower Ferrari pitstop and took all the opportunities that came to us to achieve my first podium of the year. The team were pushing me a lot throughout the final stages of the race and I was doing my best to keep Vettel behind. I knew it was not the time to make mistakes and it was amazing to bring it home.
Valtteri Bottas: It is a good result for the team. I was hoping for a bit more from the race personally. I enjoyed the overtaking that I made, it was just a shame it wasn’t further up. Midway through the race I had a brake issue which I had to manage a bit. We have closed the gap to the team in front in the Constructor’s Championship which is a good feeling. Well done to Felipe on a great result to get on the podium.
Nico Hulkenberg: “I’m very satisfied with sixth place today. Going into the race we always knew it would be difficult to keep the Williams of Bottas behind me, so bringing the car home in sixth was probably the maximum we could achieve. I had some good wheel-to-wheel battles with him and we swapped places a few times, but it was hard to match their absolute pace. Overall it’s been a great weekend: I found a nice rhythm and I have been very happy with the performance of the car. With Checo in the points as well, it’s been an excellent weekend for us and we can be proud of what we’ve achieved. It’s an important boost ahead of Silverstone where we hope to make another step forward.”
Sergio Perez: “It is a great result for the team to come away with so many points. We’ve moved up to fifth in the championship and that’s an incredible effort by everyone in the team. I had a great start and first lap: the target was to get ahead of Maldonado as he was the first driver on the prime tyre and we managed to do that. In the first stint I had a lot of pressure from both the Lotus drivers, but we held strong and the race was looking really good. Unfortunately, we lost some time in a slow pit stop and it was a bit difficult to recover after that, especially as that placed us behind Ericsson and Nasr. The second stint was not very easy because I had some very strong vibrations on the front tyres and that cost me some pace. All in all, considering our position on the grid, it was a good race. I think we could have been a couple of places ahead if everything had gone to plan, but it’s still a good result.”
Romain Grosjean: “Of course it’s disappointing to retire from the race. We had good potential after the pit stop and it was good to be able to pass some cars with some side-by-side action. We were P8 when we retired and the car was feeling good. I just lost my gears and there was nothing we could do other than retire. Let’s hope our bad luck is behind us as we head to Silverstone confident of showing well again.”

Pastor Maldonado: “It’s great to get another seventh position and the points that come with it. It was a big moment fighting with Max. The super soft tyres were very hot so losing their grip and you lose a lot of downforce close to the car ahead, but everything was under control! I wanted to get the position and I think we deserved it. It seems like we’re coming into a good time of the season for us so we’ll all keep working hard to continue scoring points.”