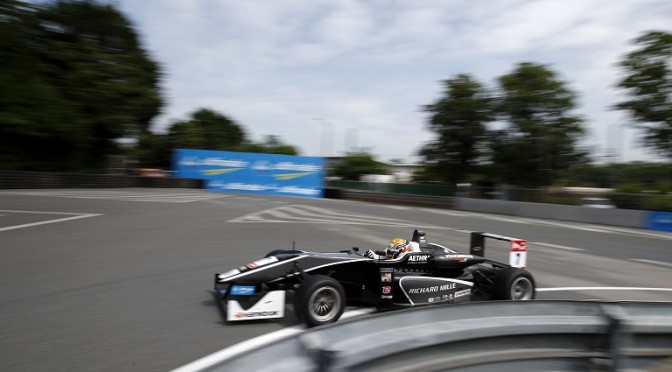 A triple premiere for Albon at the Norisring

Lotus Formula 1 junior driver Alexander Albon (Signature) dominated second qualifying of the FIA Formula 3 European Championship at the 2.300 kilometres long Norisring. For the junior driver from Thailand, who is racing at the Norisring in Nuremberg for the first time, it is a premiere: never before did he claim a pole position in the FIA Formula 3 European Championship. Moreover, he became the first driver from Thailand to do so. Behind Albon, George Russell (Carlin), Charles Leclerc (Van Amersfoort Racing), Jake Dennis (Prema Powerteam), Antonio Giovinazzi (Jagonya Ayam with Carlin) and Dorian Boccolacci (Signature) followed in qualifying for the 17th race of the season. The 18th race of the season will have Albon, Russell, Giovinazzi, Dennis, Leclerc and Boccolacci at the front of the grid in that order.

Because of the large number of competitors in the FIA Formula 3 European Championship and the only 2.300 kilometres short track, qualifying was held in two groups. The outright fastest driver from the two qualifying groups will be allowed to start from pole position while the fastest driver of the other group will start from second place. The other drivers then line up behind the first-placed of their respective groups in the order of their positions in qualifying, so that the group of the fastest driver will be on the right side of the starting grid and the other group will be on the left side.

After a five minutes’ break, qualifying for Group A got underway. Charles Leclerc (0:48.295 minutes), who had already been fastest in first qualifying in the early afternoon, again showed up in first place halfway through the session. After that, however, Antonio Giovinazzi (0:48.302 minutes) and Alexander Albon (0:48.099 minutes) set faster lap times. Leclerc then managed to beat Giovinazzi’s time, but Albon remained beyond reach for him. Santino Ferrucci (kfzteile24 Mücke Motorsport, 0:48.353 minutes), Mikkel Jensen (kfzteile24 Mücke Motorsport, 0:48.412 minutes) and Felix Rosenqvist (Prema Powerteam, 0:48.424 minutes) rounded out the top six in the group.

Because Albon’s fastest time was faster than the time set by his rival Russell, the Signature driver will be starting from pole position for the 17th race of the FIA Formula 3 European Championship season.

Alexander Albon (Signature): “It was a fantastic qualifying and I am also happy for my team that we were able to claim both pole positions. After first qualifying, we already knew that we are quick, but I just didn’t get it right. The car was not the problem, it performs very well this weekend. Since the start of the season, we have steadily been improving and now we are able to challenge for positions up front. That is a great feeling.