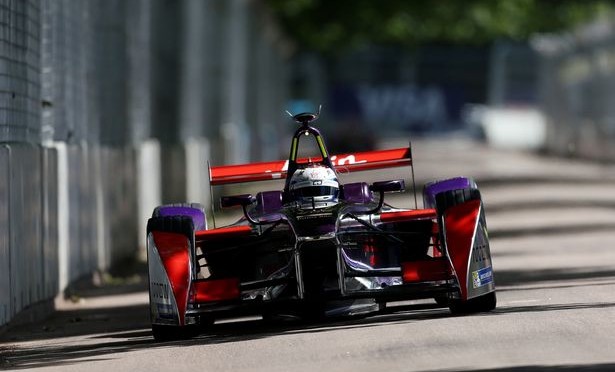 History in the making! This Saturday, 27 June 2015, the e.dams-Renault team won the first ever FIA Formula E Championship title after establishing an unassailable lead with one round of the season still to go. Sébastien Buemi converted his pole position into a race win and Nicolas Prost finished seventh, ensuring the team led by Renault Ambassador Alain Prost and Jean-Paul Driot secured the title whilst the Swiss driver remains in contention for the Drivers’ Championship tomorrow.

The venue for the final round of the FIA Formula E Championship’s inaugural season, London’s Battersea Park saw the e.dams-Renault team crowned as champions.

Partners of Renault Sport, which supervised the architecture and optimisation of the 40 Spark-Renault SRT_01E race cars throughout the year in complete and transparent equity, the French outfit won its title thanks to Sébastien Buemi’s win.

After arriving in London leading the teams’ standings, e.dams-Renault was the only outfit with both its drivers still in contention for the Drivers’ title. In free practice, both featured in the top ten, before moving up into the top six ahead of qualifying, which was dominated by Sébastien Buemi. The race started behind the safety car, but once the real action got underway at the end of the first lap, the Swiss held onto his lead. He then increased his advantage as the race progressed, whilst also managing to save his energy better that his championship rivals.

Sébastien Buemi stopped for his mandatory car change half-way through the race and came back out of the pits in first position. Despite a second safety car period, the e.dams-Renault driver held onto the lead – and his nerve – to take the chequered flag first, ahead of Jérôme d’Ambrosio (Dragon Racing) and Jean-Eric Vergne (Andretti). His third race win, combined with the seventh place secured by Nicolas Prost, meant e.dams-Renault claimed the first ever FIA Formula E Championship title.

Tomorrow, the final ePrix of the first FIA Formula E Championship season will be held in London. On the same track as today, Nelson Piquet, Lucas di Grassi and Sébastien Buemi will fight it out for the drivers’ title.

“We have enjoyed a number of successes since the start of the championship and this title is yet another,” commented Patrice Ratti, Managing Director of Renault Sport Technologies. “It caps the hard work put in throughout the season by the members of Alain Prost and Jean-Paul Driot’s team, in what has been an extremely competitive category where all the teams and drivers have had the same car. We would also like to congratulate the other teams for their fighting spirit, which has made for so many great races throughout the season! The work done with Spark has enabled us to achieve a remarkable level of fairness, performance and reliability. Our thoughts will now turn towards the future of the series. After a year in which we have made all-electric racing a reality, we can’t wait to demonstrate our expertise in an open formula.”