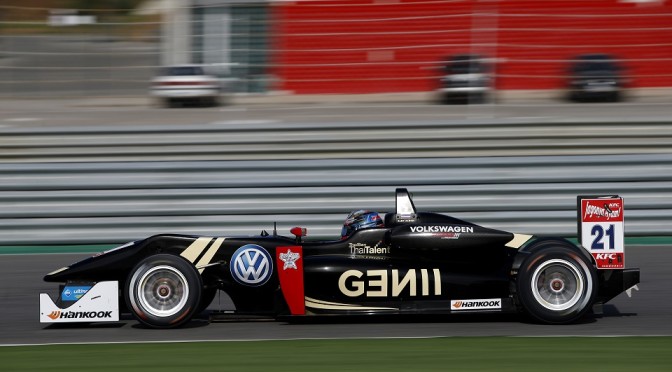 In an exciting second qualifying of the FIA Formula 3 European Championship at the 4.684 kilometres long Autódromo Internacional do Algarve, Alexander Albon (Signature) came out on top. The 19-year-old London-based Thai was 0.027 seconds faster than Felix Rosenqvist (Prema Powerteam), who is second on the grid. Nick Cassidy (Prema Powerteam) and Lance Stoll (Prema Powerteam) are on the second row of the starting grid for the 26th season race of the FIA Formula 3 European Championship, Jake Dennis (Prema Powerteam) and Antonio Giovinazzi (Jagonya Ayam with Carlin) are on the third row. In the ranking of the second-fastest laps, used to determine the starting grid positions for the third race, Rosenqvist was fastest from Stroll, Dennis, George Russell (Carlin), Gustavo Menezes (Jagonya Ayam with Carlin) and Mikkel Jensen (kfzteile24 Mücke Motorsport).

The outcome of qualifying was open until the very end: drivers alternated in front all the time until the chequered flag was out. Eventually, Alexander Albon (1:41.976 minutes) was fastest and celebrated his third pole position in the FIA Formula 3 European Championship. The Prema quartet Felix Stroll (1:42.003 minutes), Nick Cassidy (1:42.066 minutes), Lance Stroll (1:42.070 minutes) and Jake Dennis (1:42.135 minutes) had to make do with second to fifth place behind the rookie driver after Rosenqvist, Stroll and Cassidy all had temporarily been on top of the timing screens. Antonio Giovinazzi (Jagonya Ayam with Carlin, 1:42.171 minutes), the FIA Formula 3 European Championship points’ leader, ended up sixth in the session from his team-mate Gustavo Menezes (1:42.230 minutes), George Russell (1:42.291 minutes), Dorian Boccolacci (Signature, 1:42.400 minutes) and Pietro Fittipaldi (Fortec Motorsports, 1:42.420 minutes). The Brazilian, grandson of two times’ Formula 1 world champion Emerson Fittipaldi, was in first place with five minutes remaining, but wasn’t able to hold onto this position until the end.

Alexander Albon (Signature): “It is really amazing! The lap was pretty good, but I didn’t think it would be enough to end up fastest. On Tuesday and Wednesday in testing, I was well down the order, but we changed almost everything we could. We went top to bottom, we eliminated what worked and what didn’t, and the efforts have paid off. I really can’t thank the team enough for the job they have been doing. At Norisring, I was on pole as well, and since then, I also have been working very hard on my starts, so let’s wait and see what that will bring…”

Felix Rosenqvist (Prema Powerteam): “That was a really intense qualifying! I think there were five guys doing the same lap times, and most of them also happened to be team-mates of mine. To be honest, I didn’t even know I was on pole for race three. Here, you always need a little bit of luck with the wind. On one lap, you can easily be 5 km/h faster down the straight than the lap before, or the next lap, so there was a little bit of luck involved as well, but all of us drove quite well. I felt like being on the limit, there wasn’t much more left. In first qualifying, it didn’t quite work out for me, but now, I am happy with my pole position for race three.” 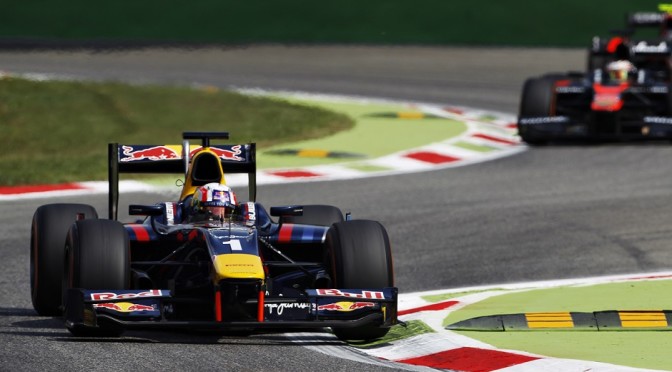 GASLY LEADS THE WAY IN MONZA

Pierre Gasly has opened his Monza weekend in fine style by taking the top spot in this morning’s free practice session at the fabled Italian circuit: the Frenchman stopped the clock at 1:31.669 early in the session for a time which went unanswered by his rivals, with Alexander Rossi and Rio Haryanto the closest to his best lap.
The session opened in sunny conditions which saw all of the field straight out on track. Rossi, Rene Binder and Sergey Sirotkin swapped the top spot between them in the opening minutes: Gasly claimed it as his own 11 minutes into the session before going even faster two minutes later to set a time which was not to be matched.
Not for a lack of trying, though: McLaren tester Stoffel Vandoorne claimed P2 within minutes, but it wasn’t until late in the session that Haryanto pipped the Belgian, with Rossi outdoing the Indonesian driver with just 3 minutes remaining in the session.
With little in the way of off-track escapades throughout the session times were extremely tight: behind the top three Vandoorne, Binder, Sirotkin, Richie Stanaway, Alex Lynn, Arthur Pic and Mitch Evans will all think they have a shot when it counts, in this afternoon’s qualifying session just a few hours from now.
F1Weekly podcast # 820