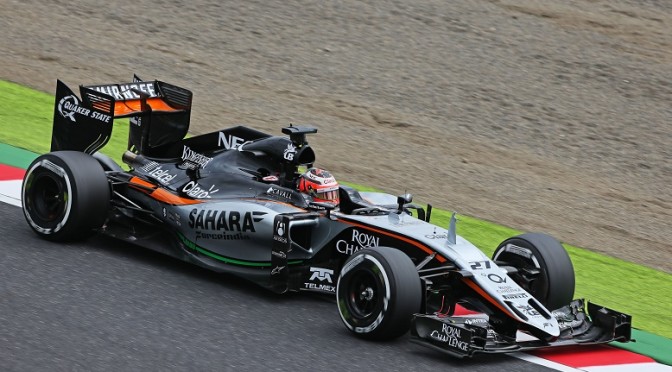 Vijay’s Vision
Vijay Mallya reflects on a successful couple of races and targets more points in Russia.
VJM: “I’m feeling optimistic as we approach the final couple of months of the season. In Singapore and Japan we continued to show competitive pace and, despite missing the chance to score with both cars, we remain in a solid fifth place in the championship.
“Russia will give us another chance to unleash more potential from the B-spec car. Even at this late stage of the season we continue to bring new parts to the car thanks to all the hard work back at the factory.
“There’s every reason to believe we can be competitive in Sochi and we expect to be up there fighting for good points.”
Sergio on Russia
Sergio Perez hopes to score points once again in Sochi.
Sergio: “I scored a point in Sochi last year and I’m looking forward to racing there again. They did a really nice job with the track and there are some interesting corners, especially the long left-hand turn three – in qualifying last year we were taking it flat.
“In some ways the Sochi track reminds me of Singapore and Abu Dhabi. That’s because there are lots of 90 degree corners and acceleration zones, which put high energy through the rear tyres. There are some quick parts of the lap too. I remember last year that turn 12 was quite difficult because you are pulling high g-forces and braking for turn 13 at the same time.
“We saw last year that overtaking wasn’t easy and it was a one-stop race for most cars. This year the tyres are a step softer so perhaps that will mix up the strategy options a bit more.”
Nico on Russia
Nico Hülkenberg looks forward to racing in Sochi.
Nico: “The result in Suzuka was just what I needed after a few unlucky weekends since the summer break. We had good pace, we did our homework and we achieved all we could from the race. It was very satisfying to see how competitive we were and that’s given me a confidence boost for the races to come.
“I had my first experience of Russia last year and enjoyed it. The unusual venue inside the Olympic Park is pretty cool and the track itself has a nice flow. The lap is quite long, with many similar corners, and that adds to the difficulty of putting together a perfect lap. The final sector is quite technical and is a big challenge for the drivers.”
FORMULA 1