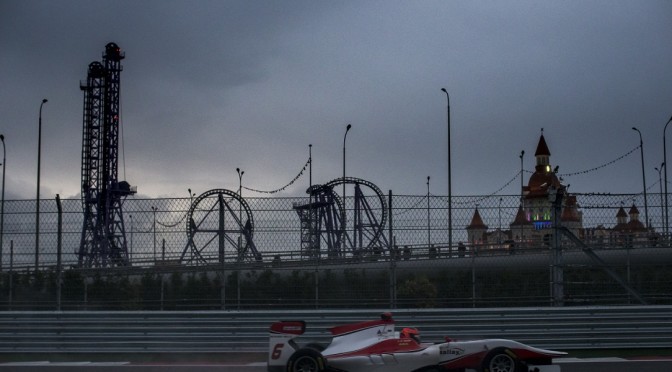 Frenchman Esteban Ocon posted the quickest time in a wet free practice session at the Sochi Autodrom: the ART Grand Prix and Mercedes backed driver’s laptime of 2:09.319 was two tenths faster than Jenzer Motorsport’s Ralph Boschung. Marvin Kirchhöfer was third.
Free Practice for Round 7 of the 2015 GP3 Series season was run in damp conditions following rain earlier in the day. However, the heavens opened just as the forty-five minute session got underway providing even more of a challenge, with a large number of drivers making their first appearance around the Sochi track.
As the session commenced in cool temperatures, Kirchhöfer was an early spinner at Turn 7. Seb Morris (Status Grand Prix) led the way before the German driver soon found some pace to top the times. Ocon was in second behind his teammate, ahead of Arden International’s Kevin Ceccon and Boschung.
Numerous drivers ran off in the tricky conditions as the rain began to fall heavier. Swiss rookie Boschung shot to P1, one tenth ahead of the German, before spinning at Turn 18. Ocon improved on Boschung’s time by two tenths before a red flag halted proceedings. Alex Fontana drifted wide at Turn 4, and spun off, making contact with the barrier. His session was over, as the clock continued to tick down whilst his car was recovered.
There was six minutes remaining when the session went “green” with the drivers’ queuing out of the pitlane to head back onto the track. As the weather worsened, the times failed to improve with stoppages and spins for Artur Janosz, Zaid Ashkanani and Alfonso Celis. Jr.
At the chequered flag, Ocon remained head of the timesheet, ahead of Boschung, Kirchhöfer, Ceccon, Series leader Luca Ghiotto, Alex Palou, Jimmy Eriksson, Emil Bernstorff, Sandy Stuvik and Seb Morris.
Qualifying takes place at 09.30 am local time tomorrow morning. The four points on pole could prove very decisive in the fight for the title… 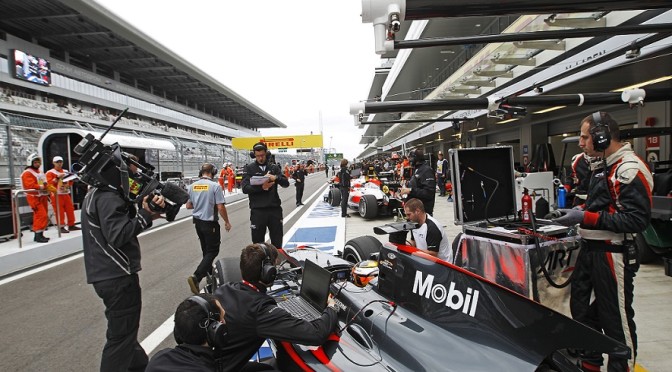 McLaren tester and Series leader Stoffel Vandoorne was on top form in this morning’s free practice at the Sochi Autodrom: with a laptime of 1:45.326 – six tenths clear from Arthur Pic in P2, the Belgian easily topped the session laying his cards on the table before this afternoon’s qualifying session as title rival Alexander Rossi had a more challenging session and finished eighth.
The pitlane opened under grey skies and in cool temperatures. Raffaele Marciello was the first driver to feed onto the track on Medium Pirelli tyres, but it was Alex Lynn who set the early pace ahead of the Italian. Vandoorne was next to go top, but Lynn was able to go even faster to reclaim P1.
Vandoorne however was clearly on a mission: he was the first man to dip under 1m47s (six tenths clear from Lynn). As Pierre Gasly edged his teammate out of P2 and reduced the gap to Vandoorne, the ART racer found some extra pace again on his next lap to leave the Frenchman 1.160s behind on the timing screens. Vandoorne eventually crushed his rivals’ hopes for glory after he broke the 1m46s barrier with ten minutes left on the clock.
Behind him, Rio Haryanto moved up to P2, but his teammate Arthur Pic bettered his laptime in the final stages of the session and relegated the Indonesian to third. At the chequered flag and behind the top three, Mitch Evans finished fourth ahead of Lynn and Gasly. It was a trickier session for Rossi who seemed to struggle in the opening stages (he span at Sector 11 but was able to resume): the American managed to move up to P7 in the dying minutes, but Sergey Sirotkin edged him out at the chequered flag. Marciello and Nobuharu Matsushita completed the top ten.
With the weather forecast uncertain for this afternoon (light raindrops made an appearance at the end of the free practice), the order might be reshuffled for the qualifying session in a few hours’ time.
F1Weekly podcast # 820