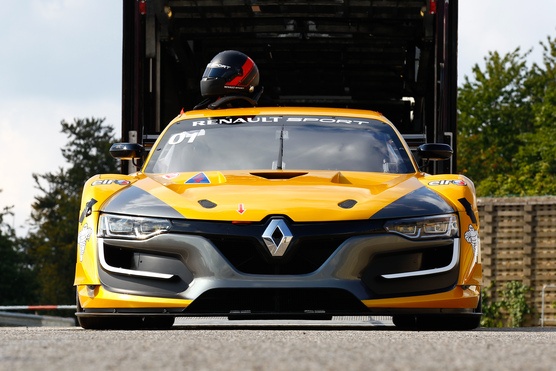 Clark and Nasir talk about Putin and the Russian Grand Prix, The host is beginning to loose faith in the modern era of Formula One. And here is some great news from our friends at Renault Sport…

No rest for the Renault Sport R.S. 01 ! For the first time since it made its racing debut, the high-performance vehicle from Renault Sport Technologies will compete outside the World Series by Renault. Two cars are entered for this weekend’s GT Tour season finale at Circuit Paul Ricard.

Originally built exclusively for racing in the Renault Sport Trophy, Renault Sport Technologies’ most recent sports car received such a strong interest that the Ulis engineers quickly went to work to make certain adjustments to reach a new homologation. The first was granted by the FFSA, through a GT3 balance of performance.

Created to achieve high-end performance, the Renault Sport R.S. 01 had to review and level out itself to be allowed to race. The carbon brakes have been replaced with steel. In addition to the 25 extra kilograms associated with the change, 50 more of ballast was added. The ride height was raised and an engine restriction added.

Aerodynamically, changes were necessary both to add drag and remove downforce from the Renault Sport R.S. 01, which naturally enjoys exceptional characteristics in this area.

Less than a week after the inaugural Renault Sport Trophy season finale, two cars will take part in the FFSA championship for the first time. The Team Duqueine Renault Sport R.S. 01 will be entrusted to three GT Tour regulars : Eric Clément, Ange Barde and Bruce Lorgere-Roux. They will be joined in Open Challenge by a second R.S. 01 entered by the Belgian Boutsen-Ginion team for Eric Vaissière and Olivier Grotz.

Jean-Pascal Dauce, Renault Sport Technologies Motorsport Director : “Since the genesis of the Renault Sport R.S. 01, the interest in our creation has been keen among teams and promoters. The success of the Renault Sport Trophy in the World Series by Renault has confirmed this trend. As competitors, we are extremely enthusiastic about the idea of seeing the R.S. 01 take on the competition. No doubt it will turn heads among both drivers and spectators. We are extremely grateful in the confidence that Hugues de Chaunac has shown in us and this drives us to continue our discussions with other championships.”

Hugues de Chaunac, ORECA Group President and GT Tour promoter : “We are pleased to welcome two Renault Sport R.S. 01s for the first appearance of this car outside the Renault Sport Trophy. It is a fast car with a magnificent look. This presence, through two quality teams, will without a doubt be positive and interesting. We have paid close attention the R.S. 01. I am convinced that the spectators will fully appreciate it.”