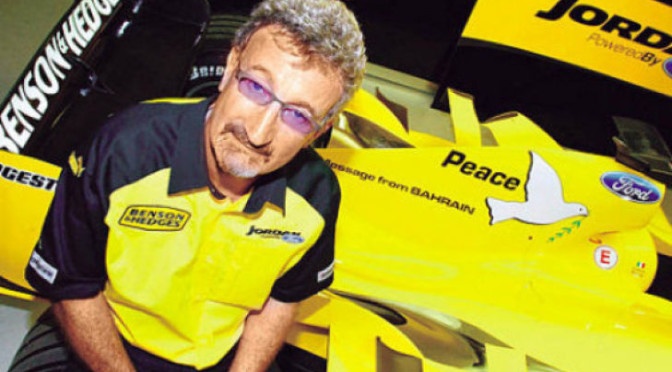 EDDIE JORDAN: A MAN WITH A TASTE FOR ALL THINGS FAST

Eddie Jordan – known affectionately at “EJ” – is probably best known for his exploits in the field of Formula One, but there is more to the man than simply being the founder of Jordan Grand Prix and a leading modern day pundit.

Of course, such is the extent of his influence in this field, it’s virtually impossible to discuss Jordan without mentioning his career in motor sport – but it could have been very different for the man from Dublin. As a devout Catholic, he initially considered a career as a priest, before eventually taking a job with the Bank of Ireland. But it was a chance encounter on holiday to Jersey as a child, when he stumbled upon a go-kart competition, that really kick-started his interest in pursuing a racing career.

By 1971, Jordan was Irish go-karting champion, and he took the next stage in his racing career by making the logical move to Formula Ford in 1974. A step-up in quality followed in 1975 when he entered the Formula 3000 competition, and continuing this vein of success, he felt that he was ready to compete in Formula Two by 1979, doing some test racing for McLaren on the side.

By this point, his talent and passion for the sport was beyond question, and he took the bold step of starting his own Formula Three team – Eddie Jordan Racing – in 1981. Without doubt, the stand-out period of that era came when Jordan’s own Martin Brundle went head-to-head with a precocious young driver named Ayrton Senna for the 1983 British F3 Championship, with Brundle just being edged out by the Brazilian. Nonetheless, both drivers went on to compete in F1 the following season, and Jordan’s star was officially on the rise.

Eddie Jordan founded Jordan Grand Prix in 1991, achieving notable success with drivers such as Damon Hill, Ralf Schumacher and Heinz-Harald Frentzen, but eventually sold the business to Alex Shnaider in 2005. Despite the decision to move into media and other business ventures, his passion for the sport – and racing in general – never diminished.

Eddie went on to invest money in several horses, and has enjoyed notable success with runners including Rostropovich at the Cheltenham Festival in 2002. Throughout his life he has maintained this interest in racing – he is well-known for enjoying a flutter on the Grand National every year – and online bookies such as Betway make it is even easier for him to do this, even if his business interests keep him away from Aintree in April.

As well as horse racing and motor sports, Jordan has invested in a vodka company, a line of energy drinks, and dipped his toe into property development, as well as being perpetually-linked with a number of takeovers of Coventry City F.C.

Whether or not any of these rumours turn out to be true, it’s obvious that there is more to Eddie Jordan than the wise-cracking pundit who once used to own an F1 team – and if history is anything to go by, we can expect plenty more twists and turns before he starts winding down into retirement.