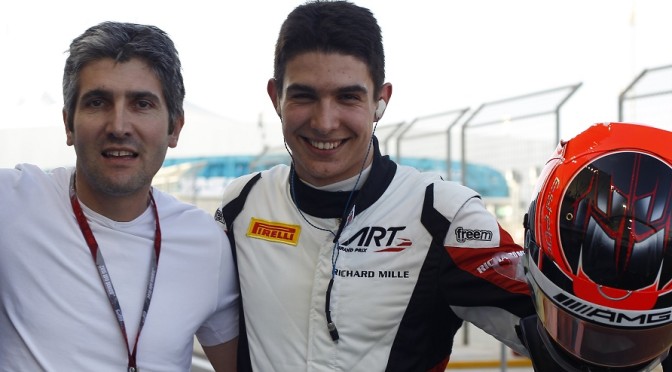 ART Grand Prix’s Esteban Ocon made an important step in his fight for this season’s title: The Frenchman came into the final round of the year with a two point deficit; but following an epic qualifying session, Ocon edged out Arden International’s Kevin Ceccon by just 0.016s. Pole was even more meaningful for the Mercedes junior as the four points pocketed means he re-takes the lead in the standings by two points. Marvin Kirchhöfer finished third with title contender Luca Ghiotto in fourth.
Ocon set the early pace in the session with Ceccon in P2. Ghiotto was on a mission and was first to lap in the 1m55’s, lapping four tenths rival than his main rival. The Trident ace tried to improve on his next run, but he was 0.089s off his best time after running slightly wide.
At the midway point, everyone returned to the pitlane for new Pirelli tyres. On their second run, it was Ceccon who took provisional pole, with Carlin’s Antonio Fuoco demoting Ocon to fourth. The Frenchman retaliated but could only manage P3 at that point, before his teammate Kirchhöfer shot into second – a mere 0.042s off Ceccon.
As the clock ticked down, Ghiotto was doing all he could to reclaim back P1: He was fastest in sector two but again lost time in the final sector of the track. With several minutes remaining, Ocon lit the timing screen in purple as he was quickest in sector one. The ART Grand Prix rookie clocked the best lap of the session to take pole position and mark his claim in a titanic tussle for this year’s title.

Ghiotto was one of the last to cross the line to take the chequered flag: The Italian’s lap wasn’t enough to challenge Ocon with the Trident star having to start from the second row tomorrow. At the flag, Ocon held on to take his third consecutive pole position, ahead of Ceccon who clocked his personal best qualifying of the campaign. Kirchhöfer joins Ghiotto on the second row ahead of Jimmy Eriksson, Emil Bernstorff, Fuoco, Alex Palou, Matthew Parry and Artur Janosz.

The top five drivers were separated by just 0.188s with the top 16 drivers covered by less than one second, underlining the fierce competition amongst the pack of talented youngsters…
Race 1 takes place tomorrow at 12:25 local time (GMT+4). With two races to go, every lap will count in the duel between Ocon and Ghiotto for the coveted GP3 title! A Champion could be crowned tomorrow…don’t miss it!