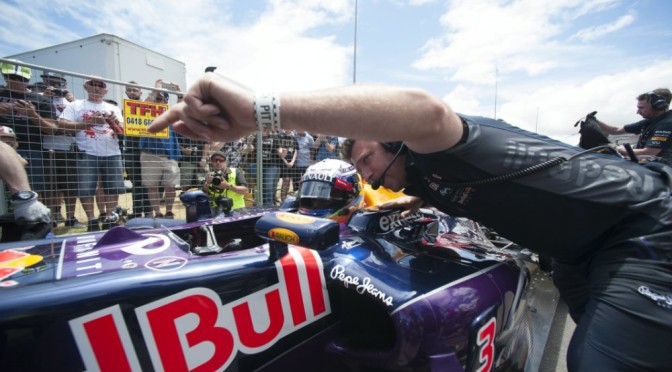 CLARK AND NASIR MULL OVER THE LAST GRAND PRIX OF THE SEASON, THE END OF THE SEASON AND WHAT TO DO NOW! WE HAVE MOTORSPORTS MONDIAL AND A NEW AND INFORMATIVE EPISODE OF TECH TALK WITH TIM! Bonus today is an Interview with Daniel Ricciardo…

The season might be over but there was one final piece of Formula One business Daniel Ricciardo needed to complete before the brief Christmas break and that involved bringing a heady dose of F1 power to folks back home.

This week Daniel jetted back to his home city of Perth where he was set to appear at Sunday’s Perth Speedfest, a massive homage to all things motorized and fast. Before that though, Daniel and the showcar crew had a little surprise in store for the citizens of the Western Australian capital – taking the double title-winning RB7 out for a breakfast-time hoon around St George’s Terrace.

Daniel blasted between the lights of the CBD’s main drag three times before treating a shocked but thrilled crowd to some tyre-melting donuts. Speaking after his early morning dose of donuts, he said: “It’s obviously nice to be home for starters and to drive the RB7 through my city streets. It woke me up and certainly made the jet lag a bit easier to deal with! It definitely got me alert. It’s nice to bring such a show to Perth.”

“I came home at the best time of the year: it’s summer, it’s Christmas, everyone is in a great mood”– Daniel Ricciardo

The 8am burnouts were a teaser for Sunday’s main event, the first Perth Speedfest. The huge show featured more than 60 separate events across 25 different motorsport disciplines on five customised track layouts at Perth Motorplex.

Daniel joined a stellar array of Aussie racing royalty at the show, including 1980 F1 champ Alan Jones, Moto GP rider Jack Miller, V8 Supercars stars Will Davison, Alex Davison and Nick Percat, as well as Superbikes ace Wayne Maxwell, Red Bull X-Fighter Josh Sheehan and WRC star Alistair McRae. After a morning of media commitments, Daniel took to his first run on the Perth Motorplex track, which consisted of a short track, with a drag strip in the middle.

In front of a crowd of 10,000, the Honey Badger completed three, three-lap runs in the RB7, before hitting the event’s ‘snake pit’ burn out pad to reprise the rubber-smoking series of donuts he’d shown off with the previous morning.

Then it was time for the big face-off, the RB7 against three other top-line motorsport machines. First up was a racing Lamborghini but Daniel made short work of the sports car on the prepared drag strip. Next up was Nick Percat in his V8 Supercars Holden Commodore and this proved to be a close affair, with the 5.0L V8 –powered saloon car and its 640hp making the battle (briefly) interesting, but once again the RB7 emerged victorious.

“It was interesting going up against a few different cars and putting the car to the test on the drag. Now I can veg out!”– Daniel Ricciardo

Daniel’s final run was against a Funny Car dragster and this time, on the drag racers home turf, things were not so easy. With a Funny Car putting out upwards of 8,000hp to the F1 car’s 800 or so and with the dragster capable of hitting 100km/h in around 0.5s, the RB7 was always going to struggle in a straight line and so it proved. However, give us some corners and we know we’d put that bad boy in its place.
There was only one way to restore pride: hit the snake pit for more huge burnouts and donuts to finish off the event in style. “I know a lot of people travel from Perth for the grand prix (in Melbourne), but it’s great to be able to bring the show to the guys in WA,” said Daniel afterwards. “I know a lot of my fans are here, so it’s great to bring F1 here and take a bit of that travel away for them at this time of year.

“It was interesting going up against a few different cars and putting the car to the test on the drag. Now I can veg out! But, seriously, it’s great to be involved in bringing and event like this to Perth and to get the F1 car here is obviously a massive effort from the organisers and also the team to bring it out here, I was more than happy to be involved and make it as good a weekend as it could be.”

“I came home at the best time of the year: it’s summer, it’s Christmas, everyone is in a great mood and obviously being here with Alan Jones and being among other Aussie motorsport stars with so much of my family here as well, it just makes it that bit better. Half the people here are probably related to me! Or at least say they are!”