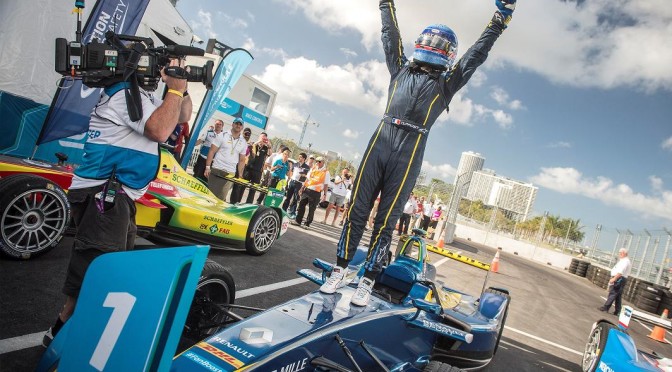 Renault e.dams celebrated its second victory of the season at Round 3 of the 2015/16 FIA Formula E Championship this weekend (December 19) where Sebastien Buemi won the Punta del Este ePrix, putting him and the team back into the top spot in the Drivers’ and Teams’ standings.

The Swiss driver’s day didn’t get off to the best start under the Uruguayan sun after a crash in FP2 caused considerable damage to the #9 Renault Z.E.15. His luck didn’t turn around come qualifying where, despite setting the fastest time during the group stages, a mistake on his Super Pole lap saw him do no better than fifth.

For his Renault e.dams team-mate, Nico Prost, qualifying was similarly frustrating. The Frenchman was quickest during his group, but was later pushed out of the top five and started the 33-lap contest alongside Sebastien in sixth.

Making the most of his position on the grid to make a move on Lucas di Grassi for fourth, Sebastien got off to a fantastic start. From there, he expertly picked his way through the pack en route to his second victory of the 2015/16 season, repeating his success from last year.

Unfortunately a poor start for Nico saw him lose one position straightaway. However, a strong performance from the Frenchman meant that he was able to work his way up to fifth by the time the chequered flag fell, securing 10 points towards his championship campaign.
#8 Nico Prost: “I am a bit disappointed about the result because I felt like I had more pace here than in the first two races. I seemed to struggle with the same corner every session and didn’t feel quite as comfortable as I would’ve liked. That said, we’ve scored some important points today for the championship and we’ll have to see what we can do in Buenos Aires.”

#9 Sebastien Buemi: “Firstly, I’m so grateful to the team who worked so hard to get the car ready to race after my crash in FP2. The result today was really a combined effort from everyone; you don’t win because of just the car, or just because of the motor. It’s a team effort, and was a great reward for all of us after the disappointment in Malaysia.”

Jean-Paul Driot, Senior Team Manager: “Today’s win was really important for us following the problems we encountered in Putrajaya, which we can see now have been resolved. However, the work doesn’t stop there; we will keep on developing the car in order to continue winning races. But at least we can all go into the Christmas break with a solid result.”

Alain Prost, Senior Team Manager: “We’re all really happy with the result here in Uruguay, especially after the day we had! The team did a fantastic job to turn the car around after Sebastien’s crash during practice. This result means we can go into the New Year feeling positive and ready to race in Argentina.”
Renault e.dams return to South America in the New Year for the fourth round of the FIA Formula E Championship, the Buenos Aires ePrix (February 6).
Results:
1 Sebastien Buemi (Renault e.dams)
2 Lucas di Grassi (ABT Schaeffler Audi Sport)
3 Jerome D’Ambrosio (Dragon Racing)
4 Loic Duval (Dragon Racing)
5 Nicolas Prost (Renault e.dams)